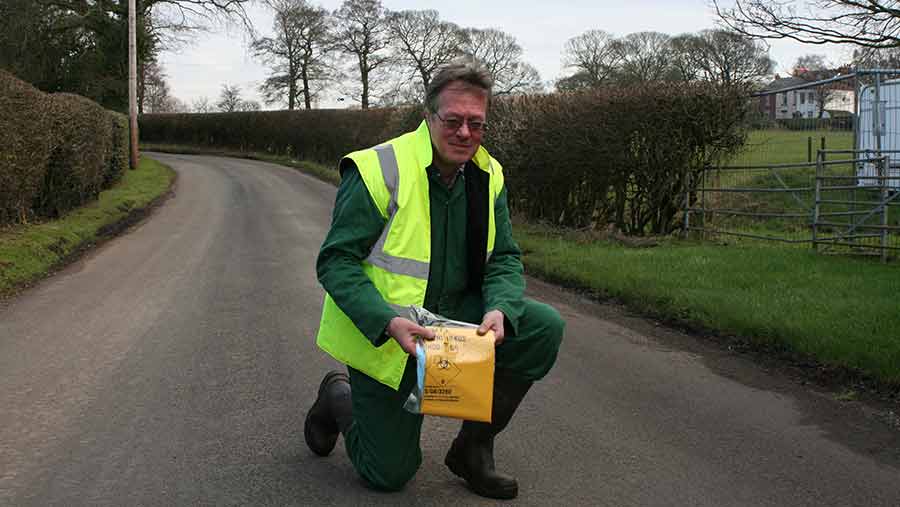 A livestock farmer is conducting a survey of roadkill badgers to gauge the level of TB infection in wildlife in his area.

Bill Mellor, who farms near Stockport, Greater Manchester, has never had an outbreak of bovine TB in his herd.

The area where he farms is classed by Defra as a “low-risk area” for TB, which means herds are routinely tested every four years.

See also: How to exit dairying when herd is under TB restriction

Last year, Defra’s Animal and Plant Health Agency (Apha) did a check test of every cattle herd in the area and no level of TB of any significance was found.

But during the last 20 years, Mr Mellor has seen the disease creep closer to his farm, Higher Farm, in Hazel Grove. This is because Greater Manchester is bordered by Derbyshire and Cheshire, where farmers have been experiencing regular outbreaks.

A roadkill badger survey carried out in Cheshire in 2014-15 found that more than 20% of the badgers collected tested positive for TB – and the strain of TB was the same as that found in local cattle.

“It is vital that we find out what is causing this slow spread of TB northwards so we can tackle it in the most effective way and stop it spreading further,” said Mr Mellor.

“I believe it is crucial that surveillance of local wildlife is carried out in all areas on the edge of the disease spread like this so we can see exactly how far the disease has spread and what needs to be done to stop it. That’s why I set this project up.”

He has been granted a waste carrier licence from the Environment Agency and collects the carcasses, triple bags and seals them, and delivers them to the University of Liverpool together with the necessary paperwork.

Since the survey was set up at the end of September, 18 badgers have been taken to the university so postmortem examinations and culture studies can be carried out to see if they have TB. The final results of the testing are still awaited.

Mr Mellor said: “By carrying out this kind of surveillance work, as well as fully analysing all the data available about TB outbreaks in cattle, we will gain a much better understanding of how the disease is spreading and what methods will be most effective at stopping it and eventually eradicating it.”

He added: “To stand a chance of stopping the spread of TB in this area, and others like it, we need to know how the disease is being spread – is it through cattle movements, and cattle to cattle contact, or through wildlife?”