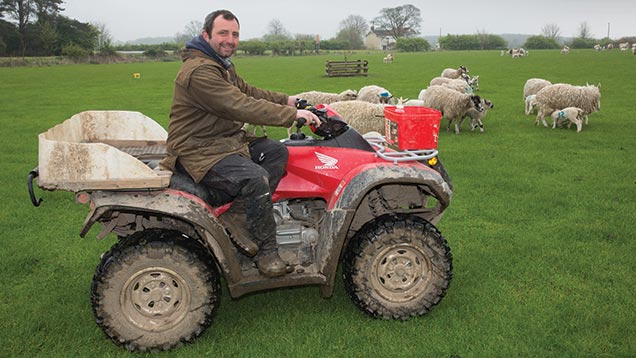 With lambing just around the corner, I could bore you with how much cake I’m feeding the ewes and how many centimetres the grass is at the moment, but I’m not.

I’m going to tell you a story about a little lamb called Dave, who has caused me havoc in the past couple of weeks.

This little lamb came off a set of quads – he was no bigger than the palm of your hand. The lads (Rob and Lowcost) tubed him a dozen times, little bits at a time and kept him alive until he was strong enough to go on the milk feeder, and they named him Dave. He ended up as a pet lamb, going in the church yard with all the other bottle lambs.

Months later, Dave went to market with all his mates, but what we didn’t realise was he had grown a set of horns. As he had been too immature to castrate, his horns had grown an inch away from his face. This was pulled up by Trading Standards at the market. I think you know what happens next.

A nice lady from Trading Standards came to see me. I think she was expecting me to have a flock of Swales and was quite surprised to find no horns at all. After commenting on what good shape all the sheep were in, and what a tidy farm I had, she went away happy.

Unknown to us, Dave had also been up to some more antics. Being a rig, he had jumped out of the church yard and covered three sheepdog training sheep I had in the next field. So we took the cast ewes to market. After letting them out of the box we noticed they were bagged-up, so swiftly put them back in and brought them home again.

On the up-side, the ewes in question have lambed and Dave has produced some quite good progeny. The moral to this story is: however kind-hearted you may be (like we are here at G Read and Son), watch what you do this lambing time with your pet lambs.