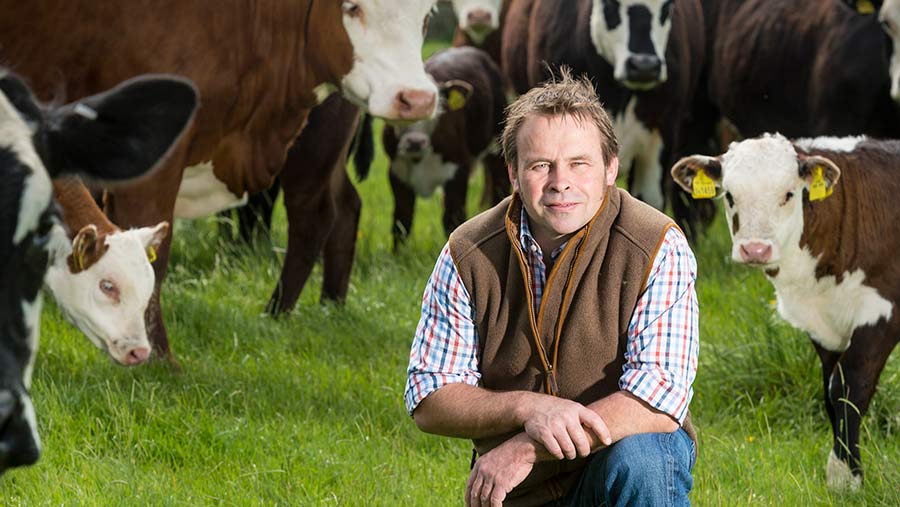 Calves, eggs and lambs, in that order – it’s hectic to say the least. More than half the cows calved in the first fortnight, so we are on track for the 65% in the first three weeks.

It’s not all been plain sailing, with losses from a breech delivery and a cow with heart failure pre calving, but I am trying hard not to focus on the bad moments as we actually have some tremendous calves up and about.

We are now a week into lambing, as I write. It has so far been relatively straightforward, but with temperatures this evening at freezing and snow and sleet on the forecast I am hoping that the ewes might cross their legs for a day or two.

We are desperately trying to pick up floor eggs and system eggs in the hope that the birds will learn to use the nest boxes, rather than the floor.

We opened our pop holes this week, with a few brave enough to venture out for maybe a second or two.

To be fair, having a full-on hail shower would be enough to stop anyone venturing out.

As with any new system, there are a few teething problems – a faulty under system light, problems with calibrating weigh cells and an egg tray stacker that isn’t quite performing as planned – but when called upon, the companies responsible are arriving as quickly as they can.

With everyone working flat out and being pulled in different directions, it’s now that I need to say thank you to the team. They are doing a fantastic job. A few more weeks of this and then hopefully we will come out the other side with a bit more sleep and a little less stress.

Simon Bainbridge runs a 650ha upland organic farm with 160 suckler cows, 1,500 breeding ewes and 12,000 organic laying hens with his wife, Claire, and his parents. Healthy maternal livestock and quality feed is a priority.