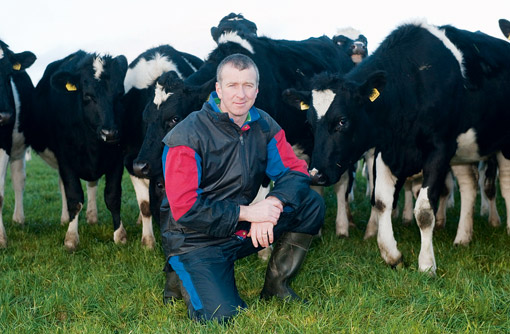 At last, now in the first week of May, we are growing a surplus of grass and not before time.

I thought being out of the country for two of the past six months thanks to my Nuffield studies, the 2012-13 winter would be short for me – boy was I wrong.

The focus as we head into the mating season is catching everything in season and getting them inseminated and back in-calf, hopefully in their first cycle.

Such is the fertility of our mainly New Zealand cows that only three weeks of black and white breeding is needed for adequate future replacements, following then with beef semen and beef bulls to sweep up the few that remain empty.

Rearing surplus heifers can be costly, especially if it reduces the milking platform and distracts management away from the core activity of milk production.

Bringing the calving date forward one week at Cairnhead will make better use of our imported New Zealand inseminator, while ensuring sufficient cows are calved and milking by the end of next April.

There’s been little time to reflect on how farmers have coped with the pressure and stress a late spring brings. There’s been an unprecedented rise those seeking help from the Royal Agricultural and Benovolent Institution and the Farming Community Network. For some all that’s needed is a talk with someone who understands, for others the emergency financial support is vital. Few industries could cope with what farming does, producing the nation’s food is a special job for special people.

For more articles from Robert Craig