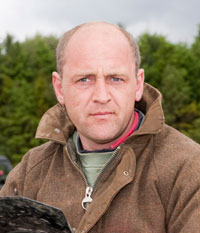 Clipping sheep is like checking mouths or feet; it is part of sheep farming and always will be. But I wait to see if the shearers will give us a discount next year for clipping on wet days. If they do the wool will be discarded.

Massive isolated floods in the area have caused thousands of pounds worth of damage to arable and livestock farmers. Local water authorities used to look after rivers and their banks, cleaning and mowing them more than once a year. Now the Environment Agency does nothing itself and also stops others doing repair work. Many acres of good farmland will be lost because of its lack of knowledge and spending cuts.

Having installed an automatic milking machine two months ago, things were going well, with calves being collected weekly, this was until Neil was stopped by VOSA. Although the pick-up and trailer were fine the number plates were different. Also we then discovered Neil was two months to young to pull a trailer. He now has to sit a test at a cost of about £400.

If it wasn’t for the floods drowning our pickup while checking sheep, this wouldn’t have happened. Matt our shepherd was towed out of the floods, while using his flask to bail water out of the cab.

Due to the rain our hay is now silage, our third attempt at sowing stubble turnips has worked, but spraying the potatoes is impossible. Our first lambs have also been sold and averaged £65, small numbers will now be sold every week.

For the first time ever I missed Kelso Show, this was due to my wife booking a holiday in Cannes, France. Sun, sea and sand not to mention the huge expensive boats. They wouldn’t have looked out of place in Northumberland with all the rain.