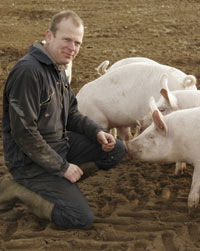 I have been coping for several months with only one employee, David. He reminded me the other day that he has worked for me since 1992.

Over that time several others have come and gone, with only one or two remaining working with outdoor pigs. Most have sadly left the industry to become anything from car mechanics to carpet fitters.

Two of us can manage quite well, but it does not allow much free time. The last time David had a holiday was in May, when my 80-year-old father came and helped me wean. Now that we are about to start farrowing the full 850-sow herd at a target of 40 litters a week I felt it was time to expand the workforce.

I wasn’t necessarily looking for an experienced stockman, but just as I was about to advertise the job locally, Daryl, a lad who left us about 18 months ago to train as an electrician, asked if he could come back after becoming a victim of the recession. He picked up almost where he left off and has proved a great help.

We are experiencing a sharp drop in the number of farrowings; one week we only had 13 litters against a target of 30-plus. I think this could be associated with a change of boar teams at the gilt mating site, an occupational hazard with the natural mating system on gilts.

The worrying thing is we can expect a compensatory increase in farrowings. Second litters start soon and I expect to get up to 50 litters a week against a target of 40. An advantage of outdoor pig keeping is we can quickly add to the farrowing accommodation with some electric fencing and some spare huts dragged from the nettles.