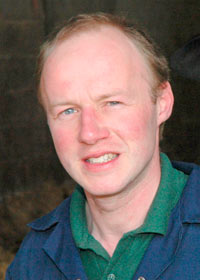 A recent visit by the Holstein classifier fortunately resulted in no “Excellent” cows. I say, fortunately, as this accolade invariably amounts to a kiss of death for members of this herd.

After the last visit, one such cow went off its feet never to get up again, and of the two remaining, one has teat end damage and is prone to mastitis and the other has been served eight times and continues to come bulling. However, with the latter, I have given up wasting time and effort going through the motions if there is going to be no end result.

By finally accepting this, I am adopting an attitude my wife has had for years. Ironically, a heifer classified as “Poor”, has given 10,400 litres of milk in 330 days and is to dry off soon for a short dry period before a 370 calving interval. It isn’t always how you look, it’s how you perform; but I won’t make the obvious reference towards Sharon, as I’ve made one already and another would be far too predictable.

While first-cut silage had little effluent, the second cut is still running effluent three weeks later. I’m trying to feed this as a buffer, rather than use up good quality first cut at the expense of grazed grass, and having no decent forage for the winter. Yields are still 32 litres a day and milk quality is holding well.

My father is currently sorting out the contents of a hayloft: Stuff that had been put there “in case it came in useful”. These items were removed through a hole in the loft before it became too large and the whole lot came down of its own accord. For those of you who have a similar store of goods, which I imagine is most of you, I must inform you the categories of sorting seem to be bonfire, dustbin or scrapheap.