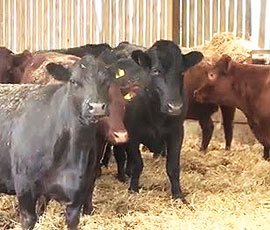 A Gloucestershire beef farmer opened his doors to councillors to show them the devastating impact bovine TB is having on his farm and argue the case for a badger cull in the county.

David Barton decided the only way to get across the full story of the disease – which has seen him lose 50 cattle over the last 15 months – was to invite people to see its effect first hand last Friday (17 May).

Mr Barton’s family has raised beef cattle at Manor Farm, in Middle Duntisbourne for the last 100 years. But he fears losing so many animals to TB will soon make it impossible for him to continue.

“We had our first case of TB in 2001. Since then we’ve had frequent tests and more than 100 reactors which has had a huge impact on my business. Cattle farming is unsustainable at the current rate of loss,” he said.

Slaughtering so many cattle but doing nothing about the reservoir of TB infection in badgers was “crazy”, he added.

Read Mr Barton’s heart-rending story in this week’s Farmers Weekly, out Friday 24 May.