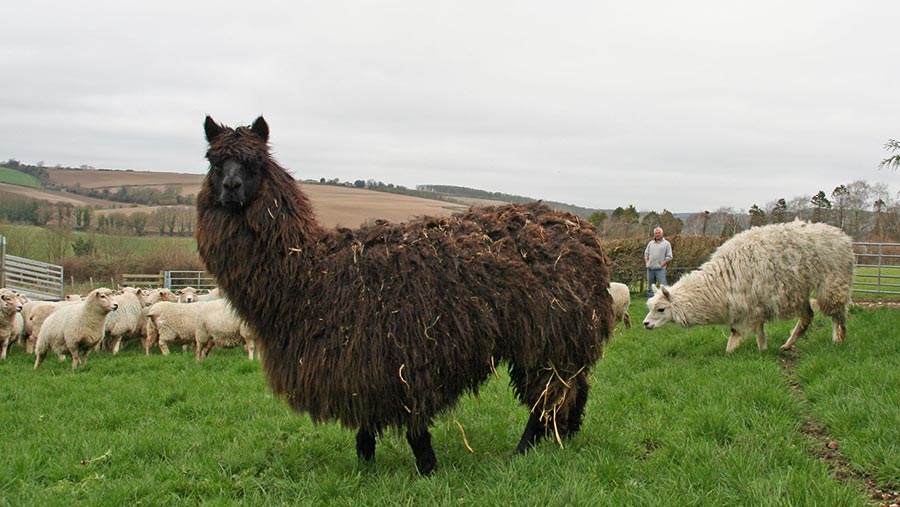 A sheep farmer who has been plagued by dog attacks has invested in a pair of alpacas to guard his flock.

Hampshire-based Gordon Wyeth hit the headlines last March when 116 of his sheep died in mysterious circumstances on the West Dean Estate, near Chichester, in West Sussex.

The New Zealand Romney sheep, many of them in-lamb, suffocated and died after they were herded into a tight group against a fence and gate bordering woodland. The sheep were worth an estimated £17,000.

Police said the sheep panicked and died either from shock or by being crushed in the flock. The cause of the attack was never established, however, officers said they were almost certain marauding dogs were responsible.

Now, in a bid to prevent further attacks, Mr Wyeth’s shepherd Lizzie Rough has introduced two male alpacas into a 20ha field at the same site in Farbridge, East Dean.

The alpacas, named “Tom and Jerry” will guard 500 ewes due to lamb on 1 April.

Mr Wyeth, the 2016 Farmers Weekly Sheep Farmer of the Year, said: “We want to avoid dog attacks on sheep at all costs. We have scanned ewes from this flock to check their pregnancy and we estimate that we have already lost more than £4,000 in lost lambs.

“We believe these losses are largely down to dogs worrying our sheep.”

Alpacas keep dogs and foxes away

Alpacas are very good at guarding sheep flocks, especially during the lambing season. They can see off dogs and foxes that approach the flock.

Ms Rough, who bought the camelids from a Devon sheep farmer on Facebook, said: “We often find dogs bounding up among the sheep and the owner some distance behind.

“We can’t be here all the time looking after the sheep, so now we have Tom and Jerry to guard them.

“These alpacas are fairly shy of people, but they are alert to predators. If a dog is on a lead, then they’re unlikely to approach, but they may well chase loose dogs that they see as a threat to the flock.”

Ms Rough said in-lamb ewes can abort their lambs by dogs running among them and scaring them.

“It’s not simply an animal welfare issue – dog attacks hit farmers’ livelihoods. Ultimately this affects my job and jobs for other young people in sheep farming.”