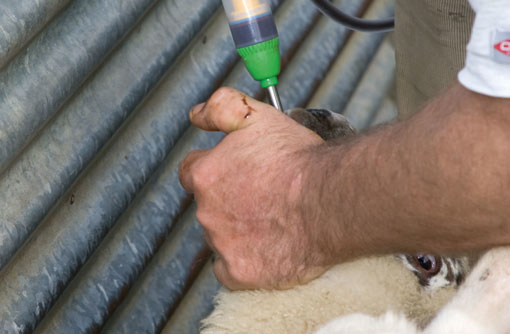 Anthelmintic resistance is on the rise, so knowing your farm’s status is crucial to effective worm control.

Sheep farmer Charles Sercombe knows only too well the impact wormer resistance can have on livestock.

Mr Sercombe ran in to resistance problems when moving sheep, the mainstay of his mixed farming enterprise, to newly acquired land.

“Naively I didn’t realise this would be such a problem,” admits Mr Sercombe. “We noticed the lambs weren’t doing well, and lost a couple, and while it’s hard to quantify the financial loss, it was big enough to make me realise I needed advice.”

It turns out sheep had picked up resistant Haemonchus contortus, the barber pole worm, and a change of wormer group to one with activity against this worm strain quickly solved the problem.

“Another time, we were using white and clear drenches, not realising that by not killing resistant stomach worms (Trichostrongylus axei) but clearing out all other competitive worms, it was allowing that species to get really strong. Both cases highlighted for me the importance of knowing the worms you’ve got and whether they are resistant before you try to treat them.”

And Mr Sercombe isn’t alone in having problems with resistance. According to a Sustainable Control of Parasites in Sheep survey (SCOPS) taken between 2006 and 2009, 100% of farms tested had a degree (less than 95% worm kill) of white drench resistance and further studies have also shown resistance to yellow and clear drenches, including moxidectin.

Mr Sercombe has since undertaken a faecal egg count reduction Trial (FECRT), where worm eggs are counted prior to and between 7 and 14 days post drenching and which will reveal a farm’s resistance status.

He has worked closely with his vet Mike Thorne of the Rutland Veterinary Centre and Lesley Stubbings, independent sheep consultant, to use his results as the basis of an annual health plan incorporating different classes of wormer at different times of year.

“Even though we had tried to change wormer groups every year, there was always some resistance to white, yellow and even more so the clears,” says Mr Sercombe.” This he believes has come from buying infected pasture.

“That is why the two new wormer groups – orange and purple – are so important to us. They’ve given us another tool, if we use them effectively, so we have something to treat sheep with in the future.

“We try to highlight what needs doing for each group of sheep, says Mr Sercombe, “using the right wormer, at the right time, in the right dose”.

He uses an orange drench on the lambs late in the grazing season to increase performance through the winter and then he gives them a clear out before reintroducing them back to dirty pasture to avoid breeding resistant worms.

What to do if you are worried about resistance