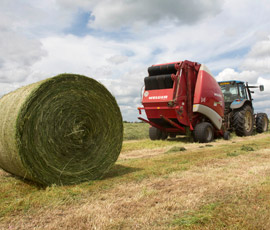 Dairy farmer Rory Christie, who runs an extensive grass-based system near Port William, said low grass growth caused by the cold and wet had forced him to open up fields never used before.

“We’ve had no option but to walk cows up to 2.5 miles and along main roads to access grazing beyond the farm’s track system,” he explained.

Mr Christie said silage ground was usually grazed once and then shut up in April. However, he had been forced to graze fields twice to ensure the 1,150 milkers were fed.

“First cut could be three weeks later than usual. It’s the continuation of bad weather from last year that’s the problem. We don’t know if we’ll have less silage this year and go into a forage shortage again.”

Fergus McDowall of Rerrick Park, Kirkcudbright, said the dairy was “dangerously close” to using up silage stocks, but first cut looked to be two weeks behind and potentially 20% down on yields.

“It’s so cold and wet grass just isn’t doing a lot. We’ve got about a fortnight of silage left. We will have to cut on 30 May, whatever happens, to put 100 acres in the pit and ensure we get three cuts in,” he said.

Beef and dairy farmer Andrew Milligan, who farms 350 head to the west of Dumfries, said lack of grass had delayed turnout significantly.

“The fields are just not ready to take cows. The dairy herd are usually out day and night at the end of April, but they haven’t been out at all yet.”

As well as feeding the 80 Holsteins a full winter ration, he has also been forced to feed silage and concentrate to housed store cattle which are usually at grass by this time of year.

Marcus Maxwell, who runs 300 sucklers and 2,500 sheep near Castle Douglas, is facing a similar situation.

“We’re still feeding sheep when we shouldn’t have to and feeding spring calvers with hay and cake. There’s just no grass there for them and it’s been so cold and wet there’s been no response to fertiliser application,” he said.