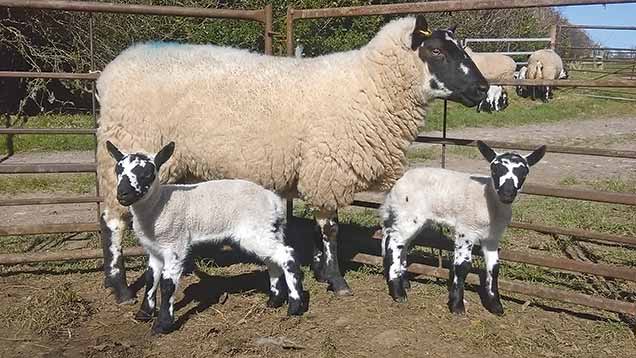 Lamb weights at 20 weeks of age in performance-recorded Beulah Speckled Face sheep are increasing by an average of 0.15kg/year, according to a study.

The figures were compiled during a Farming Connect Farmer Innovation Fund (FIF) project involving the Beulah Speckled Face Improvement Group, one of a number of projects from across Wales supported by the FIF in 2014-15.

According to the results, lambs from farms within the group have also seen an increase of 3kg of growth by the time they are  five months old since the group was established two decades ago. It also showed muscle depth has increased by an average of 0.08mm/year.

Group member Ieuan Joyce says recording has been key. “We have always kept Beulahs for their fantastic mothering qualities and low cost of production on our less improved pastures. The breeding programme has been a massive success in terms of improving growth rates.”

The number of purebred Beulahs have declined in recent years and while this follows a general trend across many UK pure breeds, a contributory factor is likely to be the lack of focus on improving the key productivity traits of the breed, suggests Mr Joyce, who farms in mid-Wales.

He believes the study demonstrates what benefits can be achieved by focusing on recording and selecting for productivity traits, taking advantage of modern statistical analysis techniques that can significantly improve selection choices.

Historic data from flocks in the improvement group has shown the genetic ability for growth in 90% of lambs born in 2014 is better than that of the average lamb born in 1994 – 20% are in fact better than the top lamb from 1994.

“We never used to finish lambs off grass, but we now finish 70% without supplementary feed,” says Mr Joyce. “Our finishing weights have increased from 17kg to 20.5kg deadweight and our yearling ewes with twins rear two good lambs. We are also increasingly seeing purebred lambs grading out at U-grades.’’

Through the initiative, the group was keen to investigate if the breeding index used to select breeding animals could be improved.

“Genetic improvement is progressive, so it is important to consider the longer-term benefits and not give up.”
Ieuan Joyce

The study involved 613 ewes and their offspring from four flocks, including those run by Mr Joyce and another Beulah Speckled Face breeder, Greg Evans.

It looked at a number of areas, including the effect of fat depth on production efficiency.

Geneticist Janet Roden, who was involved in the study, says group members have improved the growth and grading of their lambs by using estimated breeding values (EBVs) for fat and muscle depth to select replacement breeding stock.

“One of the aims of the study was to investigate what effect this may have had on ewe productivity,” she says. “One finding to emerge from the study is that genetically lean sheep can be more productive, with their lambs having slightly higher growth rates before weaning and producing more kilograms of lamb a kilogram of ewe than the genetically fatter ewes.”

The ewes were divided into low-, average and high-fat groups based on their EBV for fat depth. Before tupping in 2014, the genetically fat ewes were on average 7kg heavier than the low-fat ewes.

They were also carrying on average half a body condition score point more. Despite this, in the majority of flocks these ewes either had a similar or lower lambing percentage than the lighter, genetically lean ewes.

Mr Joyce admits many farmers are put off genetic improvement programmes because it takes many years for benefits to become apparent. “In the early years the benefits are so small that farmers lose interest, but genetic improvement is progressive, so it is important to consider the longer-term benefits and not give up.

“The more farmers who get involved in breed improvement programmes, the more chance there is of making progress. It is a great way for farmers to collaborate for mutual benefit.My flock is vastly better than it was when we first started recording 15 years ago.”