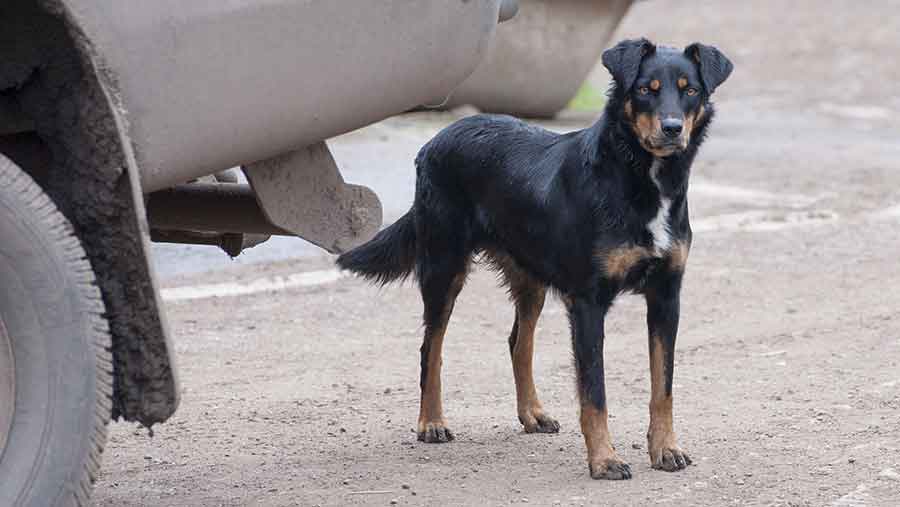 Black and tan, smooth-coated and powerfully built, the New Zealand Huntaway may be a far cry from the norm when considering a sheepdog, but increasing numbers of UK farmers are finding looks can be deceptive. Jeremy Hunt reports.

At first glance the Huntaway dog could be mistaken for a cross-bred Labrador, but when it comes to moving sheep, devotees say the breed is unbeatable.

The highly intelligent and energetic breed is primarily trained to use repetitive barking to drive sheep. However, it has also been successfully trained to respond to conventional whistle commands in addition to using their bark.

Mid-Wales breeder Brian Davies from Brecon brought the first Huntaways to the UK in 1975 – and he’s still deeply committed to the breed.

“Once you’ve had one you would never want to be without one.

“There’s a huge future for these dogs in the UK because the quad bike has changed the way we gather sheep. Most sheep farmers now use the bike to race to the farthest point behind the sheep and then drive them home.

“And the dogs that best fit this style of shepherding are Huntaways – that’s where they get their name from because they hunt-away,” says Mr Davies.

New Zealand farmers use the Huntaway because they require a dog that can work sheep by barking, mainly because their Romneys have a lot of wool over their face and respond more to noise than to the sight of a dog.

And because they want dogs that work independently and long distances away from them, they have to be totally trustworthy, explains Mr Davies.

“This is a trait that is still maintained in the Huntaway, which is renowned for its gentle and reliable temperament, particularly when around children,” he adds.

Cumbria sheep farmer Steadman Dodd and his wife Judy have been working with Huntaways for more than 20 years and say they can’t imagine farming without them.

“These dogs are tremendous for driving sheep, and in particular when we have to use the lanes around the farm,” says Mr Dodd.

The couple now have three Huntaways – a four-year-old bitch and two of her two-year-old progeny.

“Once these dogs have grasped what you want them to do they are very easy to work with.

“We do have to move sheep on the roads from time to time, but I can take newly weaned lambs and I can guarantee she won’t let one lamb stray into a garden. I can start her barking when I want to and I can stop her just as easily. It’s like flicking a switch.”

The Dodds have taken their Huntaway training to a new level and have managed to train one of the younger dogs to gather as well as to drive.

“We start with some easy training at around eight months old, just taking it steadily. They instinctively move backwards and forwards when they’re working but I’ve now started to use some whistle commands, so I can move them and stop them just as I want to.”

Mr Dodd says he’s never had dogs that can drive sheep and move them through pens or shedders like Huntaways.

“They are outstanding working dogs. They run for fun, never tire and just get on with the job until it’s done. They don’t frighten the sheep, they just walk among them as if they are another sheep and that keeps them moving.

“In fact the older bitch has taught herself to use her shoulders to push sheep forward,” he adds.