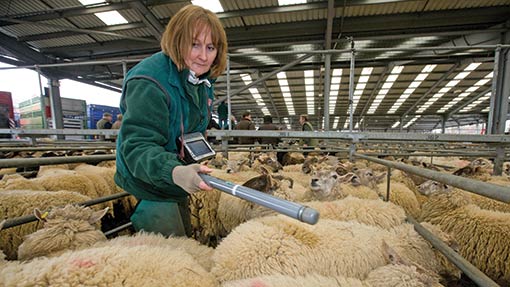 The National Sheep Association has told producers there’s no need to panic about imminent changes to sheep movement regulations. But while the sheep sector is on course for total electronic identification, some auctioneers believe it’s time to “bite the bullet” and make an immediate switch away from paper-based movement recording.

From 1 April 2014 the new electronic livestock movement recording system for sheep will be in place using a DEFRA database. But while sheep farmers will be able to continue recording movements on paper from that date – although new Animal Reporting and Movements System (aRAMs) forms will replace existing AML1 forms – the NSA is urging them to waste no time in learning about the new system and the further changes that will be implemented from 1 January 2015.

“A paper-based system will remain in place for farmers who are not enthusiastic about reporting movements using a computer, but I would encourage sheep farmers to find out as much as they can about the changes to both the online and paper reporting methods concerning sheep movements and how they can best make the transition from paper to electronic movement recording in the future, even if they do not want to do so immediately,” NSA chief executive Phil Stocker told a packed meeting of nearly 200 farmers in Kendal, Cumbria.

The meeting, organised by Eire-based company South Western, which is providing the database for DEFRA, was one of just six similar gatherings across the UK – a situation that some farmers believe isn’t giving sheep producers enough opportunities to discuss the changes.

But Mr Stocker made it clear there was no longer any point in debating the pros and cons of implementing electronic identification. “The implementation of the database has meant some unpopular decisions have been made by DEFRA. These include the removal of non-electronic slaughter tags from 1 January 2015. This meeting has to focus on providing farmers with the information they need to understand the current changes.”

From 1 April all sheep movements will be recorded on the database – managed from Milton Keynes – and not reported to the local authority. For a short time after 1 April sheep farmers will be able to use the existing AML1 forms, but these will gradually be replaced by aRAMs forms, which can be downloaded from www.arams.co.uk

“There’s nothing to be feared about this new system. It won’t be any different to how things have been done before, but sheep farmers will have the option from 1 April to report their movements electronically if they wish to do so. If some prefer to continue with paper records it’s just a case of a new form sent to a new address,” Mr Stocker told the meeting.

But from 1 January 2015 there will be another phase of changes introduced. From that date any lambs going for slaughter will need an electronic slaughter tag. Any lambs that have been tagged previously will still be able to go through the system, although DEFRA expects there will still be lambs that aren’t electronically tagged being sold for the first four or five months of 2015.

“From 1 January 2015 any sheep within the historic flock – in other words, sheep that have been non-electronically tagged – will also have to have all their individual numbers on the movements recording form. They will have to be treated as though they are fully electronically tagged and individually recorded. So from that date even farmers who are moving older ewes will probably decide to put electronic tags in them, because it will be so much easier for movement recording purposes.”

While the NSA says there are farmers who feel frustrated by the ongoing “paper trail” of paper-based recording and believe it should be ditched and the switch to electronic tagging made immediately, the NSA recognises there are still many producers without broadband and those who are not fully conversant with computers.

“There will not be a total move to electronic recording from 1 January 2015, it’s just that the derogation allowing producers to put a non-electronic slaughter tag into lambs comes to an end. So paper-based movement recording will still be an option,” said Mr Stocker.

Auction marts will have a “lead-in” time of about two months to help them adjust to the new movement recording system, but North West Auctions director Trevor Wilson believes until electronic tagging becomes compulsory there will still be a “massive problem” for auctioneers in recording sheep movements.

“Let’s look at the situation affecting ewes sold with lambs at foot. Where one of those lambs is a gimmer that may be used for further breeding, it should really be electronically tagged. And after 1 January 2015 it will be illegal to move a cull ewe being sold for further fattening without knowing its tag number. So every tag will have to be cleaned off and each digit read and recorded. If you reckon that 50% of all cull sheep go for further fattening it’s going to create an impossible situation,” said Mr Wilson.