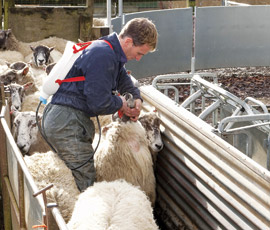 Sheep farmers should not be fooled into a false sense of security following the dry summer and must remain vigilant against the threat of liver fluke.

Speaking at a recent summit meeting at the Moredun Institute in Edinburgh, senior research scientist Philip Skuce said the last year’s wet weather had left a lasting legacy of liver fluke in many flocks.

As a result he said farmers couldn’t risk making assumptions that fluke burden would be lower just because it has been dry.

“It is clear that we are living with the aftermath of last year’s higher burden,” he told the meeting.

Liver fluke is now endemic in Scotland and during the meeting it was announced a sheep farm in Fife had been selected for a pilot project looking at how the disease can be prevented and controlled.

Results will then passed on to farmers and vets throughout the country to equip them with a better understanding of how to fight the growing incidence of cases.

In the last year high levels of fluke infestation have been found in ewes and four-month-old lambs at the farm, in Kinaldy, St Andrews, despite the fact host farmer George Milne has been treated routinely for fluke.

Mr Milne, who is an NSA development officer for Scotland, said even the sheep that looked fairly healthy and were stocked on low-risk pastures had high counts of fluke infestation.

He said he has experienced “significant losses” in the past year and was finding it difficult to control the problem due to resistance to the flukicide triclabendazole.

“If you think you have a fluke problem you need to test and then treat and re-test to make sure the product you have used has actually worked,” he advised.

It is likely fluke might of survived over winter and has been picked up by sheep from pasture at the start of spring.

“If animals are already shredding fluke eggs it would seem they have been affected eight to 12 weeks ago.

“Don’t take your eye off the ball. Fluke is an ever changing picture and it’s becoming harder to predict,” added Dr Skuce.

Scotland’s chief veterinary officer Sheila Voas added: “I urge farmers, including those in areas previously thought as fluke-free, to consult their vet to establish prevention and control measures if they have not done so already.”

See our Academy about dealing with worms and liver fluke