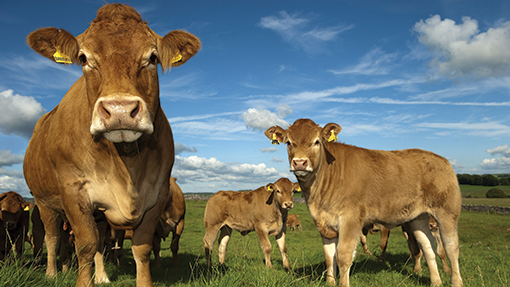 Beef and sheep farmers can look forward to performance-enhancing genetics and information technology in the years ahead. These advances will transform everyarea of livestock production.

Farm productivity and agricultural science have taken on a new urgency and importance as people become more aware of food security and the need to feed a growing global population.

The UK’s applied agricultural science capability is to be enhanced by the government’s £160m Agri-Tech strategy, of which £90m will be spent on developing a number of applied research centres.

The first of these will be an informatics centre and the focus of the others has yet to be determined.

As a result, livestock farmers can look forward to a steady stream of performance-enhancing new technology. These improvements will cover all areas of animal husbandry, including health, welfare, nutrition, building design, grazing systems and so on, but there are two areas that promise to be transformational. They are genetics and information technology.

Our understanding of the genome will lead to the breeding of much more productive animals. Deciphering the genome has proved more challenging than scientists thought it would be 30 years ago partly because of the sheer size of it. There are approximately 3bn pieces of code in the genome of major farm species. The productive traits that we are interested in are influenced by a multitude of genes – 308 significant markers have been identified for the birth weight of beef calves, 79 for milk production in beef cows but just 11 for the marbling of the meat.

However, real progress is now being made and, as the cost of analysing the genome declines, scientists can identify these markers with ever greater accuracy. This leads to a far greater degree of certainty when predicting the performance of animals based upon their genetic code.

In the past, the UK has been very successful at breeding animals that have high levels of performance for traits that are easy to measure, but poor performance for those traits that are difficult to measure. So for many years we bred high-yielding cows with poor fertility. In the future, we will be able to breed much more balanced animals – beef animals with improved growth rates, feed conversion rates, meat yield and quality, improved mothering ability and so on.

We asked Farmers Weekly readers to make farming predictions for 2024 via our website. A sample of just over 30 responded and this is what they said.

467 Readers’ estimates of the average size of a dairy herd in 10 years’ time. The highest estimate was 2,000 cows and there were no estimates under 200.

50% of respondents said they thought the incidence of bovine TB would be falling by 2024, but 50% were worried it would still be increasing.

£130/t was the average answer when we asked people to predict the feed wheat price in a decade. However, answers ranged from £60-£500/t.

Scientists are now starting to identify the genetic markers associated with all these traits, but doing so involves inspecting large numbers of living animals and that process is expensive. The relevant markers vary from breed to breed and cost restrictions will result in genetic markers being identified for some breeds but not others. The inevitable consequence will be that some breeds will gain a significant advantage over others and will become even more dominant within their sector.

The Limousin is likely to be one of the major beneficiaries of this change. The impact across the farming sector will be massive as we should have healthy, productive animals performing at significantly higher levels of efficiency. Just improving feed conversion rates in our ruminants has the potential to make really exciting improvements.

Information technology will also result in a step change in performance. The first Agri-tech centre will be focused on informatics and its role will be to analyse data from across the industry to identify trends and opportunities at a time when our ability to collect information about our animals is increasing exponentially.

Information and communication technology (ICT) systems allow the development of small sensors that can collect and transmit data about both individual animals and the herd or flock as a whole.

Microphones and cameras can be used to analyse animal behaviour. Micro sensors fitted on and inside animals can pick up a wide variety of information about individual animals including body temperature, oestrus, locomotion, heart rate, rumination, rumen pH and parturition, with others surely to be developed.

The dairy cow of the future may well have several sensors that will wirelessly feed information back to a neck collar that will act as the booster station to transmit all the data back to the office computer or the farmer’s smart phone.

This information will allow farmers to manage health and production issues more effectively and also allow us to develop a far deeper understanding of animal stress and behaviour. It will allow us to modify our housing and management systems to maximise animal comfort and improve animal performance.

The successful farmer of the future will identify where variability exists on the farm that can be managed and will then put in systems to monitor that variability. The judicious use of information technology will lead to farms where almost all animals reach their genetic potential leading to far higher levels of performance across the herd or flock as a whole.

The renewed interest in agricultural science and technology is exciting for everyone involved in the sector. We can look forward to a steady flow of technical improvements over the coming years from both the private sector and research institutes. They will encompass all areas of husbandry but genetics and ICT offer the potential to be transformational.

And finally, is there a holy grail for our scientists working on livestock production systems? A replacement for imported soya perhaps?