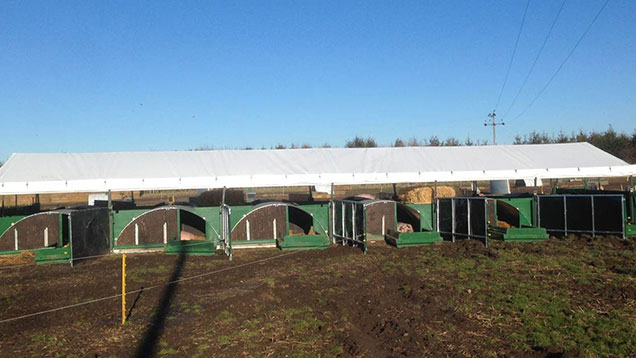 A farm trialling the use of a farrowing tent with one of its outdoor pig herds is seeing big welfare benefits for sows, piglets and the staff managing them.

Fawley Farms, near Christchurch in Hampshire, which runs 12,000 sows over 15 sites, is using the tent with batches of animals from its nucleus herd of 400 pedigree Landrace sows.

Traditional farrowing huts are being used for the rest of the animals in the herd, so the results can be compared side by side.

Terry Ledbury, production manager, says the tent is of the company’s own design and incorporates 12 traditional farrowing huts, which he wanted to use as the business already owns 3,000 of them.

Advantages of a farrowing tent

The open-sided tent is placed in the centre of a 60sq m paddock and huts positioned six on one side of the tent and six on the other.

Each sow has access to a wedge-shaped individual paddock on the outside of the tent. A passageway runs down the centre which allows staff to check on pigs and sows while remaining under cover.

A number of management and welfare advantages have been identified, with two batches of pigs – equating to 240 sows – having been through the tented system, according to Mr Ledbury.

“In the past when we’ve had periods of hot weather, with temperatures reaching 28-30C, then the temperature in [outside] huts can reach 40C, which causes serious welfare issues. The tent makes a real difference to the temperature and seems to be at least 6-8C cooler.

“With traditional huts, the sows also tend to lie outside by the water trough if they need to keep cool. In the tent, where they have shade, they are more likely to lie in the hut. This means the piglets are being suckled and not getting dehydrated.”

One of the main reasons for testing the tent with the nucleus herd is that staff are required to take samples, such as DNA, from the sows on a regular basis, says Mr Ledbury.

This could be a “hideous” job in the middle of winter when dealing with individual arcs, all spread at least 20m apart.

The tent not only offers a nicer working environment to take samples, but it is also quicker to check individual litters every day.

“Staff are very happy to work in the tent. This is important, as in very wet winters we were losing some staff due to the conditions. It is really helping with staff morale.”

Another big advantage of the tent, which cost about £5,500, is that the farm is using half the amount of straw, as they are finding they don’t need to straw up as often to protect the piglets, says Mr Ledbury.

This also looks to be helping reduce mortality rates. “There is less straw so there is less opportunity for the piglets to get under the straw and then for a pig to lie on them.”

Performance data for the pigs is not yet available, but Mr Ledbury believes that the results will be encouraging. “The piglets we have weaned look superb. I think we are weaning heavier pigs.”

The trial, which is ongoing, is being partly funded by Bpex’s Innovation Fund.