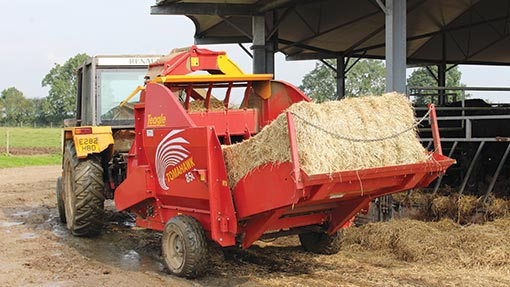 Investing in a feeder bedder has not only substantially reduced the time taken to bed up beef cattle, it has also halved straw use on one Bucks farm.

Nick Hawes runs 160 suckler cows and finishes all his calves at Briar Hill Farm, near Steeple Claydon. Most cows are Aberdeen Angus-cross, with a small nucleus of pure Angus.

The farm is a mixed arable/beef enterprise, with cattle run on a grazing-based system and finished on a home-grown barley-and-bean ration. Cattle are finished at 22-27 months.

There is a mix of buildings – a 30m roundhouse plus existing covered loose yards from when the farm was a dairy unit seven years ago, before Mr Hawes bought the farm and established his beef herd.

Like many other beef farmers, he bedded down the yards by hand. “We first started using bales and it was taking too long, especially with the Hestons, which don’t roll out like round bales. We were also using too much straw.”

So in 2007, he invested in a Teagle Tomahawk T8080SC straw shredder and 18 months ago he upgraded to a newer, higher-output T8500SC model.

“The benefits of a mechanical bedder were soon apparent, with straw use falling by about 30%.”

Bedding also requires less labour, as it is now a one-man job. “It used to take two people – one on the loader tractor with a second person needed to open the gates and stop animals escaping. Straw is now blown in from outside.”

He estimates that it has halved labour and has enabled him to bed every day rather than every two to three days. “Taking a little-but-often approach has improved animal health and cleanliness.”

There are also other benefits from the more even covering of straw. “We used to get wads of straw that made the muck more difficult to handle.

“With the new system the muck breaks down more easily and spreads better.” He spreads muck on his cereal stubbles and the 180ha of cropping provides the straw.

Achieving a better spread is particularly important on pasture, as this avoids rejection of grass by cows, he adds.

But it’s not just bedding; the chopper is also used to feed silage. “We are currently chopping and feeding round-bale silage along the feed barrier.”

The T8500SC high-capacity feeder bedder Nick Hawes currently uses has a capacity of 4.5cu m and can spread straw up to 25m.

It has a bale chamber 150mm wider than the standard 8100-series models, as well as a larger-diameter fan that, according to the manufacturer, offers a greater blow distance and enables bales to be loaded slightly more easily.

Minimal maintenance is required – herd manager Martin Keeves (pictured on the right with Nick Hawes) simply greases the chopper up weekly and checks the bed chain tension and adjusts if needed. Blades last about a year.

Straw is blown into the 30m-diameter roundhouse, plus 25m into the older sheds.