The research, carried out by Harper Adams University, Shropshire, used Holstein and beef cross Holstein calves and compared bulls and steers reared on a cereal-based diet. 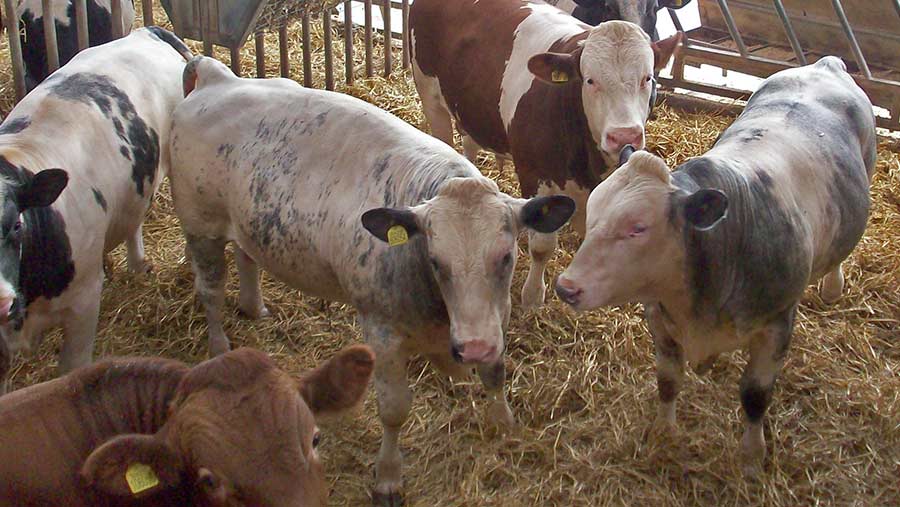 In April 2016, the retailer claimed that switching from bull to steer beef would improve meat quality and consistency in some of its products.

“We set out to assess whether that was the case and, as well as production performance, we looked at eating quality and consistency with the help of AHDB.

“Since the trial began the retailer has reversed its decision and our findings back that move as the right one for a number of reasons,” Mr Marsh says.

At 22 weeks old they were divided into two groups of 17 calves – one group was left entire, the other calves were castrated by a vet.

On that ration, bulls recorded slightly higher daily feed intakes, but they grew faster, at an extra 0.06kg of daily liveweight gain (DLWG).

They also achieved slaughter liveweights that were 16kg heavier than the steers, which meant overall feed conversion ratios for the bulls were better.

For every kg of carcass gain the bull group consumed 9.7kg of dry matter, whereas the steers needed 10.26kg DM (+0.56kg) to produce the same result.

When the carcass was examined the bull group recorded a higher killing-out percentage of 51.6% than the steers yielded, at 50.6%.

The resulting average bull carcass was 299kg, an additional 13.4kg over the steer group’s average. 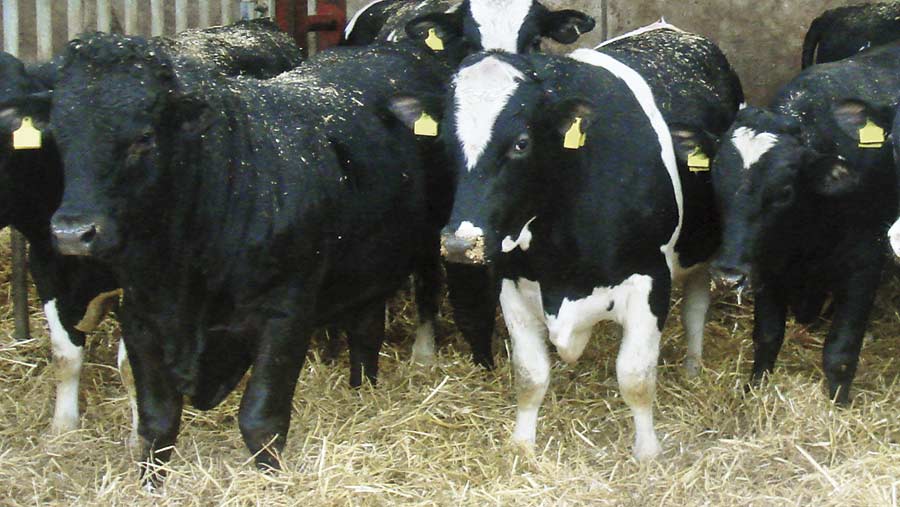 “The better growth performance of the bulls means they were slaughtered eight days earlier than the steers,” Mr Marsh explains.

“Scaled up over an average commercial herd this extra efficiency would result in both financial benefits and producing beef with a far lower carbon footprint,” he adds.

As well as the faster growth, the most valuable part of the carcass, the eye muscle, was almost 18% larger in the bull carcasses at 81.0sq cm compared with 68.8sq cm in the steers, contributing to a higher carcass value.

However, bulls recorded significantly lower fat classifications of 2+ against the steers which scored 3-/3=. Carcasses classified for conformation R- to O- at ABP, combined with a fat classification of 2= or 2-, receive further deductions of between 10-20p/kg.

“So this had negative effect on some of the bull carcass values compared with the steers, which had a higher fat classification overall and tended to have more marbling,” says Mr Marsh.

With the higher carcass weights and faster growth rates, gross margins of the bulls averaged £302. In terms of carcass value that represented £25 a head more than the average for steers (£278 gross margin).

“The financial benefits of bull beef are significant and give the farmer more chance of producing a product that can compete with the rising challenge of poultrymeat, which is gaining popularity as a cheap alternative protein source,” Mr Marsh says.

“If, however, you have problems handling young bulls then steer beef is a viable option.”

Work carried out by the AHDB tested the beef for a range of characteristics, including toughness and colour.

The toughness of meat is assessed by measuring the amount of force it takes to shear through the steak.

It is then compared against a scale ranging from 1 – very tender – to tough at 5.5.

“The current average value for a sirloin steak found on supermarket shelves is about 3.1,” explains Mr Marsh.

Both groups on the trial fell into the mid-range, with the steers recording 3.03 and the bulls significantly tougher at 3.58.

“Although the meat from the bulls was tougher it was still well within the range deemed acceptable by the retail trade,” says Mr Marsh.

“It is worth emphasising that more than 60% of beef consumption is mince anyway, so tenderness across the whole carcass is less important than it appears.”

The supermarket claims that a move to steer beef would improve consistency also seem to be unfounded.

“In fact, the range in tenderness scores was lower in the bull group than in the steers, indicating that the bull beef was a more consistent product,” Mr Marsh says.

One of the potentially off-putting traits for bull beef is the colour of the steak, with shoppers preferring brighter, red-coloured steaks.

Bulls are more likely to produce incidences of a “dark cutter” – the result of a lack of glycogen in the muscle caused by stress prior to slaughter. It can be seen in up to 10% of bull carcasses, according to statistics from 2009.

However, just one animal in the bull group was recorded as a dark cutter, although the meat from the steers was significantly lighter in colour.

“Although this is a potential negative to bull beef, the effect can be lessened by careful management of the bulls to reduce stress ahead of slaughter,” Mr Marsh adds.