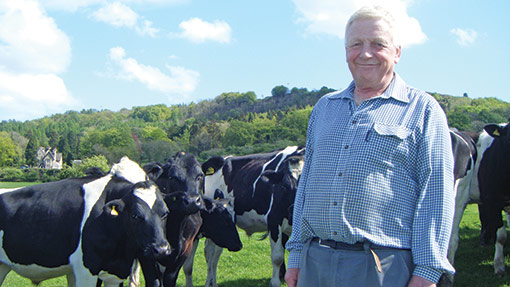 Brothers Ben and Adam Pullen, aged 64 and 69, respectively, are far from easing into retirement, with planning permission for a new cattle shed granted, nearly three years after switching from dairy to beef.

After being shut up with TB for eight years, the decision to switch to a beef enterprise came almost immediately after the dairy herd of 180 British Friesians went clear.

“Sixty days after we got the all clear we had a well-attended dispersal sale and started the beef enterprise with excitement and a new lust for life,” says Ben Pullen (pictured).

See also: How one farmer is achieving amazing gains on dairy bull calves

Provenance of the 10-day-old calves is key to their success. The current herd of 770 pure- and cross-bred British Friesians come from two West Country farms: Yeo Valley’s Holt Farms, Somerset, and the Tortworth Estate, South Gloucestershire.

“All calves are organic and cared for extremely well. No vaccinations are given, but they all get plenty of colostrum.

“We have very few problems with health, but have to be careful in the autumn because of pneumonia.

“The calves are closely monitored, but – touch wood – we have had little trouble due to the quality of the buildings and hutches they’re raised in.” Mr Pullen says.

“To me the price is less important than health status and quality of the calves. I’m prepared to pay a premium as I consider I have the best source of calves, which saves money in the long run and prevents problems down the line.”

As an approved fattening unit, the Pullens can continue to buy in from both sources, even if they are under TB restriction, providing they’re tested every 90 days.

Calves are bought all year round, at 15-20 a week, but this slows up in winter and summer. They arrive as soon as their passport is back at about 10 days old.

“They are kept in hutches or individual pens and fed 2.75 litres of milk substitute once a day. We can have 80 calves on the bucket at any one time,” says Mr Pullen.

Calves are weaned at 56 days into groups of 20 and are moved into straw yards containing an ad-lib feeder of the same calf ration until they’re 12 weeks old.

After this they’re moved on to a 16% protein ration. (See table). All young calves are offered wheat straw and not introduced to silage until they’re five months old.

Bullocks are castrated at three to four months of age before being turned out along with the heifers at four months old. They continue to be fed 1kg barley a day for two to three weeks, until they become fully adjusted to grass.

“The system is designed to be simple. After weaning and adjusting to grass at turnout, the cattle stay on grass or grass silage until 20 months of age.”

From the beginning of March until late autumn, animals are set-stocked on 100ha permanent pasture. The 100-year-old mix of natural grasses are incredibly productive and the cattle don’t damage the land, says Mr Pullen.

“There are no concentrates whatsoever until fattening. In winter, the stores receive only silage,” he says.

“Our philosophy is to grow all feed [grass and maize silage, wheat and barley] on the 243ha farm, to avoid buying in food where possible,” he adds.

From 20 months the cattle receive a blend of maize and rolled wheat, and either continue to graze or receive silage indoors – depending on the time of year and grass quality.

“The Angus-cross heifers come back with an average deadweight of 300kg, they finish at two years or before and also grade O+4L,” he adds.