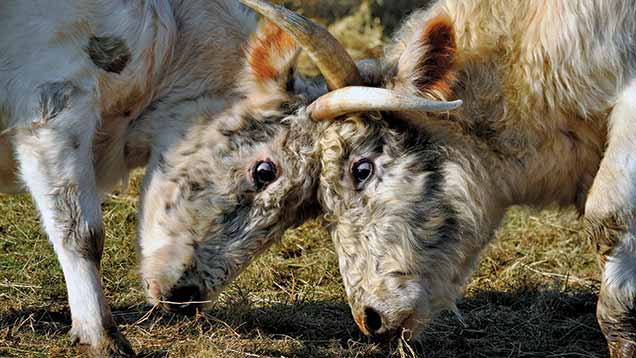 With no passports, ear tagging or other mundane jobs such as castration and worming, the wild cattle of Northumberland will appeal to many Farmers Weekly readers.

The fact that they really are wild – there’s no human intervention at all apart from a little hay if they are reaching starving point – is something their new custodian had to hear to believe at her interview.

Ellie Crossley is the first female warden of the Chillingham wild cattle.

“As they have never been selectively bred, they are a lot smaller than domestic cattle and don’t possess a lot of traits that we would associate with modern-day cattle.”
Ellie Crossley

“At first I imagined there must be some intervention, but because they have such an amazing immune system, it is very rare for them to become ill or die young,” explains 25-year-old Ellie.

“The bulls very occasionally cause each other injuries when they are fighting over the cows, but that’s about it. They won’t accept weak calves into the herd; actually killing them or just leaving them to die. Only the strongest bulls mate with the cows.

“When the herd was a lot smaller, there would have been one king bull. However, now that the herd has reached 100, there are too many cows for one bull to serve and too many younger bulls for him to fight off.

“Now we find that we have between six and eight dominant bulls that all have rights over the cows. On days when a cow or heifer is bulling, it is very noticeable because the dominant bulls all start putting on displays and sparring with each other.

“They paw at the ground, rub their faces in the dirt and make low-pitched growling noises at each other.”

Chillingham cattle are not ear-tagged, passported or recorded on any cattle database.

They don’t receive any vaccinations or individual yearly TB tests, so their meat can’t – under any circumstances – go into the food chain.

“We don’t even know most of their dates of birth,” says Ellie. “When one of our animals dies, their carcass is taken somewhere discreet within the park to be buried.

“Being wild animals, when they die of old age they tend to take themselves off somewhere quiet to die anyway.”

Ellie’s appointment was made by the Chillingham Wild Cattle Association, which is the owner of the herd that has existed in 120ha of parkland next to Chillingham Castle since the 1300s.

It is believed the cattle were always kept for sport rather than meat and milk.

The Grey family who owned the castle (Earl Grey tea was named in honour of them) used to invite their friends, family and important people to come and hunt their rare cattle.

Originally this would have been on horseback with packs of dogs, spears and swords; moving on to guns later on.

“The cattle are highly territorial and aggressive, which meant it was always guaranteed to be an exciting hunt, which is one of the reasons they were left wild and never domesticated,” says Ellie.

Ellie started her new job in January and had until Easter to get to grips with the herd, as that is when the park opens for tours and private parties where people can see the cattle for themselves. The 100-strong herd are dangerous at all times.

“I’m getting used to doing on-the-spot health and safety assessments,” says Ellie, who is no stranger to the danger of wild animals, having been attacked by a stag while shutting up the family hens at the age of 11.

Rather than put her off, the experience made her determined to work with animals.

“I can glance at a group now and work out who might have trouble making a dash over a fence if needs be.

“Sometimes I take groups inside on foot, but other times we look at the cattle from the other side of the fence; a large part of doing the tours is down to gut feeling. There has to be such a lot of respect for these cattle.”

The tours are an important part of Ellie’s job, as it is her role to raise the profile of the herd, which is run as a charity – a separate entity to Chillingham Castle.

She also has to roll her sleeves up and manage the cattle’s environment; checking fences and walls which are so vital for the herd’s biosecurity status.

Biosecurity concerns did, in fact, prompt a small number of the cattle to be sent to a secret location in south-east Scotland in 1967.

This second herd is now up to about 30 in numbers and gives some hope in the fight against extinction if the core numbers are ever struck by a disease such as foot-and-mouth.

Ellie previously worked for the Hedge Project, an organisation dedicated to rare breeds and their grazing.

Before that, she was with the National Trust looking after its Ruby Red and British White cattle at Studland, also in her home county of Dorset. Prior to that, she’d gained a diploma in countryside management at Kingston Maurward College.

“It is quite an isolated job, but I love it,” says Ellie. “I trained on a ‘normal’ beef farm and had presumed that I would end up working on a commercial holding. To find myself among these beautiful cattle is a real privilege.

“One of the first things I noticed was that they don’t mob you for food like the other cattle I have known.

“When I have fed other cattle it was always a struggle to get through the gate, but these ones only ever come across for some hay when they are starving; when there is so much snow that there is no grass.

“The second thing I noticed was the noises they make. They are really primitive sounding. The bulls have a very low-pitched guttural bellow.

“There is also a really loud screech which is quite eerie when you are out in the dark. They are very intelligent, stunning-looking animals with mottled markings.”

One of the most rewarding parts of the job, Ellie says, is finding a new calf. Although they are not tagged, Ellie tries to keep a record of the sex of all new calves.

“The cows go away from the rest of the herd to have their calves,” she explains. “They then leave it, pretty much like a deer leaves her fawn – just coming back for it to feed.

“They are very good at hiding the fact they are pregnant; it is pretty impossible to tell which cows are in calf. They just don’t seem to show like other cattle. The calves are the most pristine white colour; absolutely beautiful.”

Over the years, any weak calves born with genetic defects as a result of inbreeding were not accepted into the herd.

“They get rejected and die, which means they are not able to pass on their weak genetics,” explains Ellie. “This means inbreeding is now not an issue because there are very few weaknesses left within the herd.

“We only get very strong, healthy calves being born. Because they have been inbreeding for so long, the animals here are all genetically identical and the calves receive the same DNA from their dams and their sires.”

Chillingham wild cattle are completely unrelated to any other breed known to us today.

“As they have never been selectively bred, they are a lot smaller than domestic cattle and don’t possess a lot of traits that we would associate with modern-day cattle,” says Ellie.

“It is thought that a few Chillingham bulls were taken out of the park to contribute to the White Park gene pool, but because White Parks have been so selectively bred – as most domestic cattle have – their genetics are completely different.

Ellie believes all cattle farmers would enjoy seeing the herd.

“While I appreciate the demands of modern-day farming are completely different, there is something refreshing about seeing nature run its true course,” says Ellie.

“The economics of farming means we have moved so far away from trusting the old stockman’s instincts that something will ‘come right’. These cattle remind us of a time when farmers didn’t routinely reach for an injection.”