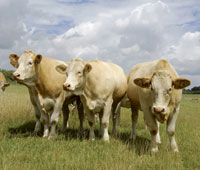 Dual-purpose breeds may be becoming more popular among certain dairy producers, but using multi-purpose genetics has as much of a place in beef production.

This is according to Simmental breeder and UK and Northern Ireland agent for Bavarian Fleckvieh Genetics, David Hazelton.

“German and Austrian Fleckvieh are essentially Simmentals. There are various different types of Fleckvieh meaning they can be selected for beef or milk, depending on specific breeding criteria.”

However, beef producers can draw on certain characteristics of the breed to achieve improved milk yields without compromising beef qualities. Fleckviehs are involved in a fully fledged dairy and beef programme with bulls tested for weight gain and feed conversion.

For Mr Hazelton who farms at Dungannon, Northern Ireland, improving milk yields in his 20 cow Simmental herd, was the main reason for introducing Fleckvieh genetics.

“I wanted to improve milk in the herd and Fleckvieh fitted the bill perfectly.” Mr Hazelton started by importing AI straws from three bulls.

“There are still plenty of Simmentals with good milk figures, but introducing Fleckvieh genetics could be the answer for breeders that have run into problems with milk production,” Mr Hazelton stresses.

In fact one of Mr Hazelton’s Simmentals, Ranfurly May 22 sired by a German Fleckvieh, won Armagh Show Simmental champion 2008. She was praised for her “beefyness” and lots of milk.

“May was so milky we reared three calves on her in 2008 and her calf, Ranfurly Winkie W8, was a first prize winner at Stirling this February, selling for 5500gns.”

“It’s a known fact when you select for muscle in any breed you are going to lose milk,” he says.

“I found with Canadian Simmental polled genetics, the milk just disappeared – calves were not getting enough milk and were appearing undernourished.”

But, since introducing Fleckvieh genetics, milk yields have increased, udders are looking better and calves are doing well.

And for Oxfordshire beef farmer, John Rixon, Lopemede Farm, Thame, the main driver for introducing Fleckvieh into his 200-cow herd of pedigree Simmentals was polled genetics.

“There are few polled Simmental genetics available in the UK so we decided to use Fleckvieh semen to try and breed polled heifers.

“Because we farm commercially we are always trying to cut costs and make life easier.

“De-horning is not the best job and with the possibility a vet may have to be used to de-horn cattle in the future, cost is also an added factor.”

Fleckvieh also offered the potential to improve milkyness and calving ease in the herd, he says.

When selecting Fleckvieh bulls, Mr Rixon chooses individuals with a good balance between meat and milk and good overall conformation. “Any bull must look good so I select good, long bulls, not excessively muscled so milk is not compromised.”

The thorough Fleckvieh testing regime implemented by Denmark and Germany was the main attraction for Lincolnshire beef farmer Brian Lundy.

“In the UK there is no testing station for Simmentals – by using proven Fleckvieh genetics we are improving the reliability of our stock.

“As pedigree breeders, my main aim is to breed an animal to make profit for the commercial man,” says Mr Lundy who farms his 25 cow herd of pedigree Simmentals at Caistor Moor Farm, Market Rasen.

“Feed is the main cost for livestock farmers, so producing an animal that has good daily liveweight gain and feed conversion efficiency is key.”

And because all Fleckvieh undergo thorough testing for these criteria, reliability is improved.

“Using Fleckviehs also allows us to introduce more polled genetics and produce cows that are well balanced for meat and milk.”