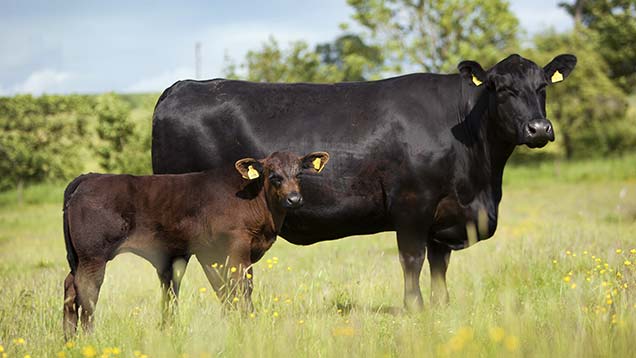 The Lawsons were delighted when their Aberdeen Angus cattle won the Eblex Better Returns Programme award for the most improved herd in 2012.

It is given for achieving the most genetic gain for commercial characteristics during a 12-month period.

The accolade is a reflection of the family’s hard work and commitment, since the 40-cow herd was established in 2005 at South Farm, Hallington, near Newcastle.

It followed the purchase of 10 in-calf heifers from Angus breeders, the Massie family of Blelack, Aberdeenshire.

Fortunately, Alan Lawson and his son Steven see eye to eye on pedigree breeding, with their focus firmly on the traits they themselves seek.

Their initial judgement is made on visual appearance, with estimated breeding values (EBV) and scanning results also taken into account.

“Our ideal bull would have decent width and length, with ease of fleshing and four good legs to carry him,” says Alan Lawson.

“He would weigh roughly 1,100kg at two years old, which is important because native breeds have to compete with larger continentals in the marketplace.

“Milkiness is also critical; our herd is rated well above average for this trait.”

Father and son also share a similar opinion on EBVs. “They are valuable, but they should not be used in isolation.

“The ease-of-calving figures can be misleading, because accuracy levels are only 30% for some bulls.

“We tend to dismiss any information with an accuracy of less than 50%, although we would use a bull with a low figure if we really liked the look of him.”

“Top of the list for our commercial customers is 400-day growth, as it has a direct bearing on profitability.

“Longevity also affects financial performance, so cow families must have durability. Our oldest cow is 12 and still producing a good calf each year.”

Ultrasound scanning has been used for the past decade, mainly to assess the genetic merit of 12-month-old bulls.

It measures back fat, intramuscular fat and eye muscle. Bulls are given an official weight at the same time and their scrotal circumference is noted.

“Scanning can produce some surprises, with bulls that look as if they will score low having high figures and vice versa,” he says.

“It is just another tool for checking the herd is on track and we wouldn’t discount an animal on scan results alone. Good locomotion is also essential.”

One proud moment came in 2008, when Hallington Walter, a son of AI bull Blelack Prince Consort, won the overall breed championship at Carlisle and made 10,000gns.

A prolific sire of Hallington females, Walter has a milk EBV of +21, with a terminal sire index of +40 and a self-replacing index of +55.

Other notable home-bred sires from the mainly spring-calving herd include the 17,000gns Hallington Edition, used over the heifers before being sold last year at Stirling, where he was reserve intermediate champion. He is by Nightingale Proud Jake.

Semen is rarely purchased from AI companies, with the Lawsons preferring to buy privately.

On average, three bulls are used across the Angus herd each year, with the surplus marketed at society sales or sold to private buyers.

Breeding females have not been sold to date, but a small number will be forward at a society sale at Stirling this autumn.

The Lawsons are careful to avoid overfeeding, which they feel may lead to disappointing breeding bull performance in a commercial setting.

Pedigree status is crucial to the success of the 95ha mixed farm, which also supports a pedigree Charolais herd, says Mr Lawson.

“A farm as small as ours would struggle to survive with a commercial suckler herd, but the sale of breeding bulls makes it viable.

The perfect animal will probably never be bred, but it is a goal that we will continue to strive for.”