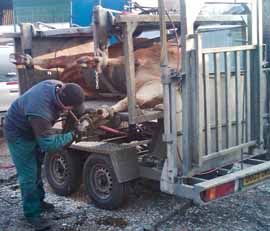 According to Bryan Wilson, who runs a suckler and store finishing system near Stafford, foot care in beef herds is no less important than it is for dairy animals.

“We trim our cattle’s feet because they need doing, it’s as simple as that,” says Mr Wilson, of Whitecross Farm, Haughton. “When a cow is in pain she won’t come into heat or will fail to hold to service and you just won’t get the growth rates in fattening animals. The issues we see in beef animals are no different to those in dairy herds.”

Those issues include overgrown hooves, sand cracks and digital dermatitis. Laminitis is a problem too, leading to accelerated hoof growth of the walls and long toes. As the cow’s toes begin to grow out, her weight becomes distributed to the back of her heels. An abnormal cow will toe-out in the rear feet and her weight won’t be evenly distributed over all four claws.

Lameness is seen most commonly in the hind feet, particularly in the outer claws. Routine trimming, says Mr Wilson, will keep claws at the correct length and sole thickness to maintain a good foot angle and even weight distribution in the claws. Correct functional trimming will alleviate pain in infected claws and promote healing.

Proper foot trimming is the only means to correct the problems associated with overgrown claws. Regular preventive foot trimming reduces lameness because subsequent claw diseases are prevented and lesions are detected at an earlier stage.

Mr Wilson’s policy is to book a professional foot-trimming contractor when he has a group of about eight animals that need attention. When he spots a foot problem in an animal, he adds it to the contractor’s list.

“I give him plenty of notice and wait until I have a group to make it worth his while,” he says.

Safety is paramount because beef animals are not handled as often as dairy breeds. For this reason, good handling equipment is essential.

Although Mr Wilson’s contractor has his own crush, there is a permanent cattle-handling system at Whitecross Farm, built by Mr Wilson with help from EBLEX.

A holding pen leading to a circular forcing pen means cattle can be moved smoothly into a curved and sheeted raceway. The sides are enclosed to block out distractions. The raceway straightens ahead of a crush, allowing animals to see other cattle moving forward and encouraging them to follow.

By salvaging materials from the farm, the only new item Mr Wilson had to buy was a non-return race gate fixed near an access door at the far end of the handling shed. A squeeze crush, converted from manual to hydraulic operation, is simple to operate.

Mr Wilson, who has Limousin and Belgian Blue cattle, says the system makes the task of handling stock both quicker and safer.

He regularly exhibits cattle at agricultural shows and says foot trimming has an important role to play in making his cattle look their best. “It makes cattle stand better – they stand as they should stand.

“If their feet are overgrown they have a tendency to stand on their back feet.” He will trim the feet of show cattle as young as nine months when they need attention.

Although EBLEX says lameness in the beef herd is not as common as it is in the dairy herd, it encourages beef farmers not to ignore foot health. Mary Vickers, a senior beef and sheep scientist at EBLEX, says it is as important to look for the cause of foot problems as it is to treat the symptoms.

The cause can be diet-related or perhaps the yard or housing area needs scraping more regularly. Cattle might be standing around in wet or stoney gateways or in slurry for long periods.

“Farmers need to look at the cause of any foot problems rather than just treat the symptoms, solving the problem is essential,” says Dr Vickers.

“In intensive finishing systems it will probably be the case that if everything else is right feet won’t have to be trimmed too often.”

Treating lameness should always be a priority as prompt treatment of lame animals can help with a quicker recovery and avoid severe lameness.

A good and competent foot trimmer can go a long way to improving cow mobility, but when the problem is diet-related or linked to disease or housing, the advice of a vet or nutritionist should be sought.

Bulls’ feet should be trimmed about two months before they are due to work because poor foot health can impact on semen production.

Footbaths will help harden feet and minimise the risk of infection. “Some producers who have had digital dermatitis in the herd footbath regularly and this will really keep on top of the problem,” says Dr Vickers.

Digital dermatitis is an infection found most commonly on the skin of the interdigital space or above the heel. The organisms associated with it thrive in slurry. The appearance of the lesion changes as the infection progresses through different stages.

Housing is a major risk factor because contact with slurry is crucial to its development. Cattle at pasture are also susceptible when the weather is wet.

Mr Wilson has a number of 20-year-old cows in his herd and he says cows will last longer and fattening cattle will grow better when digital dermatitis is kept at bay.

“We fatten a lot of cattle. Digital dermatitis can be very costly when it’s not treated – cattle won’t grow because they are in pain” he says. “You will get more out of a cow when you look after her feet.”

He only has a small number of dairy/beef cross cattle, but these animals can be the most susceptible to foot problems. “Foot issues are more common in the dairy herd and crossing these animals with beef breeds can be a source of problems in beef herds,” says Dr Vickers.