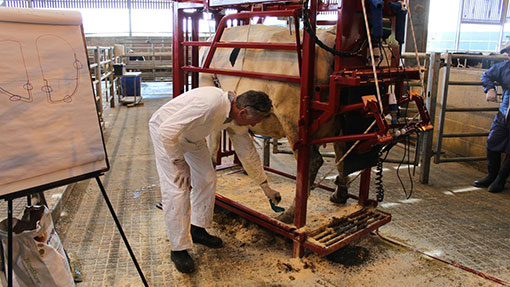 Best practice when hoof trimming was one of the central topics at the large herd seminar in Tortworth, Gloucester, last week. Rhian Price reports.

The measuring stick for foot-trimming efficacy needs to change, one leading hoof trimmer has warned.

“Too many times I find the quality of foot-trimming is measured by how many cows [trimmers] can do in a day. Instead we should be asking: ‘What can we do to prevent lame cows?’” said Karl Burgi, a hoof health consultant from Wisconsin.

“Whole-herd trims are not best for the cow. I think sometimes it benefits the trimmer more,” Mr Burgi said.

Therefore, he said it was more advantageous to “time trim” every cow and heifer – close-up to calving, in early lactation and during other lameness trigger periods – to ensure claws are in the best possible shape to prevent lameness.

“Whole herd trims are not best for the cow. I think sometimes it benefits the trimmer more.”
Karl Burgi, Wisconsin hoof health consultant

For example, in-calf cows and heifers should be trimmed between three to ten weeks prior to calving, he suggested.

“If cows are in good shape during the transition period digital dermatitis [risk] is lower.

“If a heifer doesn’t have digital dermatitis [DD] the day she calves she is about 750kg [of milk] ahead of the one that has DD,” he added.

Mr Burgi said there were also a lack of follow-ups being carried out on lame cows, which was a major cause for repeated cases.

One of the advantages of regular trims is follow-up checks can be carried out to determine treatment efficacy, he added.

“We don’t do enough rechecks on lame cows and six weeks later she is lame again.”

He said whole herd trims risked “hoof trimmer fatigue”, which led to overtrimming and more chronically lame cows. In fact, he said up to 80% of the cows he assessed were overtrimmed.

“Most of the medial claws [I see] are overtrimmed,” which Mr Burgi said led to the development of white line lesions.

Instead, he advised no more than 70 cows should be treated daily and the focus should be on modelling the lateral claw to balance it with the medial one.

When conducting functional trims he said the hoof wall shouldn’t be trimmed past the point of the toe.

“The wall is like the foundation. As soon as you take it away you don’t have the strength there anymore,” he added.