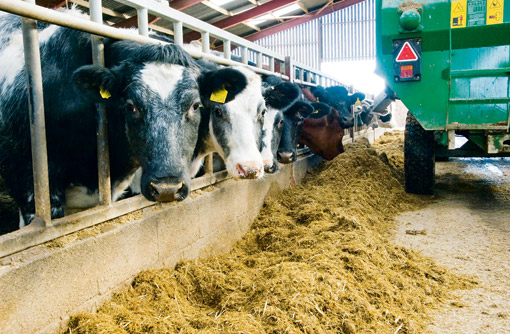 Huge cost savings could be made by finishing dairy bull calves off forage. Jeremy Hunt reports

Gloucestershire beef producer Paul Westaway has been assessing the ability of black and white bull calves to reach a marketable weight of 550kg deadweight by 15-months-old on a feed regime that cuts the amount of bought-in feed from the 2.5 tonnes used on a conventional cereal-based system to around one tonne.

Even at the early stages of the trial, when the batch of 30 Holstein bulls had been on the forage regime for just five months, the first indication of the significant cost savings were evident.

“That compares with a bought-in finishing concentrate giving us 12.5% ME and 16% protein and costing £230/t,” says Mr Westaway.

“McDonalds have been concerned about the high cost of rearing Holstein bulls on a cereal-based diet and in discussion, and through our connections with Blade Farming, we suggested evaluating a forage-based regime.

“Our own farming system is very much forage-based and through the experience we’ve had with Aberdeen Angus x Holstein bulls we felt there was potential to look at a similar system applied to pure Holsteins,” says Mr Westaway.

“It’s not sustainable to continue finishing black and white bulls on cereals alone – and I’m sure it’s a system that’s not producing much margin for many of those who are doing it.”

Convinced that Holstein bulls will finish on a high-quality forage-based diet supplemented with under one tonne of cereals, Mr Westaway agreed to host the trial.

Ashley Bright of FAI Farms in Oxford, Phil Hadley of EBLEX and Colin Hare of Countrywide have been involved in setting up the management system and feed regime for the McDonalds-sponsored trial, which has been based on 30 pure-bred Holstein bulls sourced by Blade Farming. The calves were conventionally reared to 12-weeks-old and were them moved to the Mr Westaway’s farm for the trial. The calves were gradually introduced to the forage diet over about 10-14 days.

“At the five-month stage the bulls – which were loose-housed in straw yards and bedded up every-other day – were well on target in terms of growth rate and in meeting the cereal consumption of under one tonne, reports Mr Westaway.

At this point in the trial, the bigger cattle were about 300kg and achieving weight gains of 1.15kg a day from a once-day feed. The bulls were being fed 7kg of forage, which was a mix of grass, lucerne and red clover, plus 7kg maize and 2.5kg concentrate.

However, this is a system that will depend on feeding high-quality forages and not one that will achieve the performance needed by using basic grass silage, says Mr Westaway.

“It’s not rocket science to grow these high-quality forages, but they are critical. The maize is providing the carbohydrate and lucerne is giving us the protein.

“We precisely record daily feed intakes of the group and weigh anything that’s left over in the trough, although at the five-month stage they were virtually clearing up everything they were given.”

A ring feeder providing ad-lib straw is also available and the bulls were taking about 0.4-0.5kg a day.

“This trial will hopefully highlight a new opportunity for British beef producers. There will be about 800,000 Holstein bulls born in the UK this year and we’ve got to find a use for them. We can’t go on disposing of them as though they had no value.”

Want to find out about Paul Westaway’s farming enterprise in Gloucestershire or interested in rearing black and white bull calves for meat production? Then the Beef Expo farm walks and event on Wednesday 23 May and Thursday 24 May at the Three Counties Showground, Malvern, Worcestershire, may be of interest.