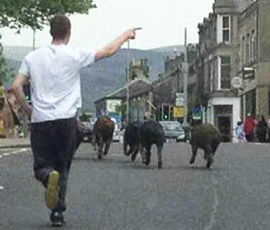 This is the surreal moment when a group of runaway pigs were caught on camera roaming through a town centre.

The six hogs brought traffic in Glossop town centre, Derbyshire, to a standstill as they raced along the High Street before fleeing in different directions.

The fugitive pigs had escaped through a gap in the fence of their holding pen on Monday afternoon (25 May).

John Mettrick, who owns a butcher’s shop on High Street West, was left alone to man the shop as staff rushed out to snare the runaway swine.

“We had every available member of staff that we could trying to round them up,” he told the Manchester Evening News. “We took our own trailer down and eventually we managed to get them all but they were scattered all over the place.

“One of them decided to go to the loo in Norfolk Square and as one of the lads went to apprehend it, he stood in it and ended up on his back. It was eventually captured in the storeroom of Esso Service Station and the other five were in various yards around Glossop.

“We got them all in the end but the lads were absolutely exhausted. It certainly caused much amusement in the town centre.”

Mr Mettrick praised the quick-thinking actions of members of the public who helped round up the pigs.

“We had loads of people ringing up. The office upstairs was like pig headquarters. The pigs were no worse for their experience, but obviously it’s something we don’t like to happen and we will be reviewing our procedures.”