When it comes to developments in the pig sector, selective breeding and estimated breeding values are held up as two of the technologies which revolutionised the industry.

However, the latest developments in pig breeding mean the next steps for the industry could be bigger than ever – and even harder to imagine.

“Right now is one of the most exciting times in pig breeding,” says Craig Lewis, genetic services manager for pig genetics company PIC.

See also: Pig developments over the past 50 years

“The pig sector has always been at the forefront of making improvements in animal breeding, but as we move towards 2030 it will arguably be the most rapidly moving period of innovation we have ever seen.” 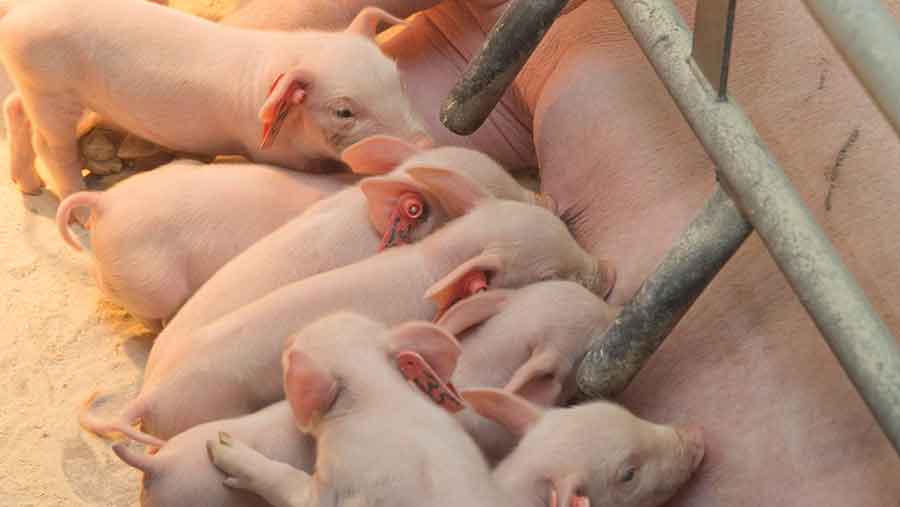 The reason for the industry’s potential revolution is the development of genomics, technology which refines the way an animal’s genetic potential can be predicted.

The system analyses DNA for genomic variations, known as SNPs, which are compared against a bank of genetic information. That information can then be used by breeders to enhance particular traits.

“Five years ago I’d have said that the current genomic technology was science fiction, but it’s developing so rapidly that even looking five years into the future is extremely difficult,” says Dr Lewis.

“The way it works today is by using markers across the genome to identify true relations with animals across a pedigreeship. It isn’t about just measuring traits, it’s about refining the true degree of relationships.”

The distinction is important in pig breeding, because by having a clearer picture of the degree of relationship for specific traits, such as feed conversion or back fat, you can get a more accurate picture of the estimated breeding values of individual animals – and a better understanding of which should be selected for breeding.

At a farm level, those developments mean an increased rate of genetic improvement, which can have significant impacts on a farm’s bottom line.

“Some traits are impacted more than others – in some traits accuracy will increase by 150% while others will be minimal,” Dr Lewis says. “Sex-limited traits, for example, such as reproductive traits, will be easier to get improvements on.

“But every year, those improvements will mean pigs have a greater profit potential.”

Since implementing the technology in 2013, Dr Lewis says PIC has achieved a 35% increase in the rate of genetic improvement in its animals. That increase in potential is worth about €56 cents (50p) per pig in a system. What’s more, the improvement is compounded year-on-year as genetic benefits are cumulative.

While the potential for significant genetic and economic gains are there, Dr Lewis says selections need to be made responsibly, taking into account biology, welfare, economics and ethics.

“It’s very important for a genetic provider to understand the consequences of selection,” he says.

“Back in 2012 we said good pigs could wean 30 pigs per sow per year, and that at current rates of genetic improvement by 2062 that would reach 54.

“But you don’t want to go too fast on total born if it just increases mortality, they need to reach slaughter.”

Ian Gillies, Rattlerow Farms’ AI and genetic production manager, says while prolificacy is important, aiming for ever-larger litter sizes should not be the sole focus for the future of the UK pig sector.

“The emphasis should be on producing more uniform piglets at birth,” he says. “Progeny that is strong and robust with the potential to thrive and perform efficiently throughout their lives.”

While some breeders may be hinting at 40 pigs per sow per year, for UK farmers it would be more realistic to produce 33-35 piglets with viable birth weights.

And while genomics has a significant value to the sector, selective breeding still has an important role to play in breeding programmes, he adds.

“What an animal expresses physically often supports its genetic value and these characteristics must be considered. A good example is sow/gilt teat lines. Dams selected for higher teat numbers do tend to rank highly in statistical evaluations and these physical characteristics are now routinely earmarked within selection criteria.”

Pigmeat quality will also be an area of focus in future as retailers drive the industry to improve the consistency of finished carcasses and pork’s eating quality, Mr Gillies says.

“If we can improve the quality and taste of our product via genetics, while maintaining traits that support higher welfare standards, then that might help secure market share,” he adds.

Dr Lewis says the ethical consequences of breeding developments can’t be ignored either.

“As underlying genotypes change, the nutrition, health and infrastructure also has to change,” he says. “There are evolutions we need to make to help producers extract the potential in the system. Linked to that are welfare and societal concerns, too.