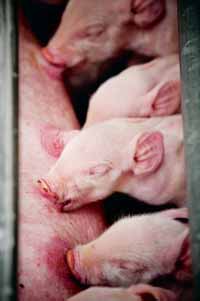 Good colostrum management is one of the main ways of improving farm profitability, according to Philip van den Brink, of Dutch company Zarkos-Smith Associates and SwiNco.

“Its important to better piglet survival rates – but when you’re not getting colostrum into piglets, you can forget it.”

Ideally producers should be raising 12-13 piglets a pig and to do this sows will need at least 12 active teats – any less and culling should be considered. Piglets should also double their weight in the first week of life. When they are not achieving this, it says a lot about milk production.

“A piglet is more likely to die when they don’t suckle quickly. Research has shown 90% of piglets survive when they go immediately to the udder after birth and suck.”

A farmer should check on the farrowing process every two hours and mark the first-born piglets. Weak piglets should be placed at the udder as soon as they are born and put under a lamp when necessary at two hours old.

“When the total litter is born, close in the four to six first-born/heavy/full piglets for two hours and let the later-born/small piglets drink colostrum. After this period give all piglets access to the udder and then repeat this process once.”

Mr van den Brink said rescue decks offered an excellent opportunity to save weak piglets that would normally starve and die – something which is an increasing risk with increased productivity.

“One of my clients installed six decks in 2007 and a further six the following year. Over this time the number of piglets weaned a sow a year rose from 27 to 31.1. Early mortality rate also dropped from 8.8% to 6.9%.”

“When you start piglets off young enough on the rescue deck you can put weight on and create a high value pig,” he said.

To ensure piglets have received enough immune protection they should only be cross-fostered after they have been with their dams for 24 hours.

French vet, Yannig le Treut, explained that colostrum is rich in white blood cells (part of an animal’s immune function), which are initially produced in the dam’s gut and tonsils. “When a piglet suckles on its own mother, white blood cells from the dam go into the piglet, These cells then automatically know where to settle in the piglet. However, this only happens when the piglet suckles from its own mother.”

Each piglet should receive 100g of colostrum for every kilogram live weight from his own mother to allow the passage of these important cells.

Supplementing with fish oil could give great benefits

Feeding fish oil to sows may have gone out of favour, but increasing supplementation, particularly in the final three weeks of gestation, could yield significant benefits.

According to nutritionist Phil Baynes, Baynes Nutrition, when insufficient fish oil is included in the diet, the sow will be unable to build up important fatty acids for the developing piglet.

“Omega 3 or n-3 are important elements during gestation. Generally, the n-6:n-3 ratio should be about 6:1.”

“EPA is known to lower inflammation and have calming properties, which could help reduce behaviour such as tail biting. It is also a precursor to DHA.”

DHA is the most abundant omega-3 in the brain and retina and is a major component of physiological functions of the body.

Research has shown that inclusion of fish oil, particularly in the final three weeks of pregnancy, decreased the time taken for piglets to access the teat, increased weight gain and reduced post-weaning checks.

“These piglets were more equipped for their environment, having better eye and motor neuron function.” As a result they got up quicker and were less likely to be laid on. Fish oil also increased gestation length and brain development.

Linseed oil does offer an alternative source of omega-3, however, according to Dr Baynes, fish oil is the most efficient way of getting fatty acids into pigs. However, not all fish are the same.

“Farmed salmon offers the best source of DHA, which is the main component we are interested in and can be included in compound feed or home-mixed feeds.

“Oil is by far the most cost-effective way of including fish in the diet – 3kg of oil costs about £4 and has the same efficacy as 50kg of fish meal at £55.”