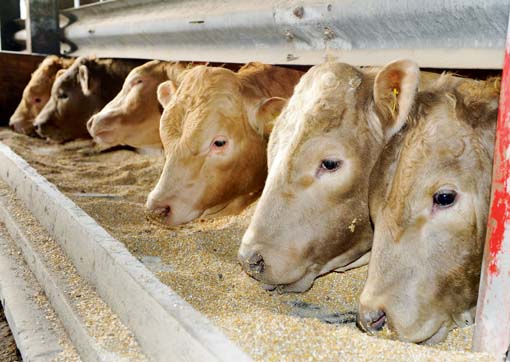 The two most critical periods in the annual production cycle of a suckler herd are during bulling and pre-calving. Get them both right and you should exceed the target of a 95% calf crop with a 365-day calving interval for a herd with a compact calving period of nine weeks, says beef specialist Simon Marsh.

“A spring-calving cow should be in lean condition and have a body condition score of 2. Cows above score 2.5 have a significantly higher incidence of dystocia, especially when carrying continental-bred calves. Cows below condition score 1.75 can lack strength at calving and produce poor quality colostrum,” says Mr Marsh, senior lecturer at Harper Adams University College, Shropshire.

Cows in the herd of Peak District farmer Simon Frost – who is hosting the Farmers Weekly/Harper Adams Beef Focus herd – were weighed and condition-scored at weaning and again at pre-calving. The cows have been wintered on restricted silage and straw.

“The pre-calving weight and condition score was recorded at 604kg and 2.08 respectively (see Table 1). The range in cow condition was relatively small, with 85.4% of the herd scoring 2-2.25. Results showed only 8.3% of the herd was below that range and 6.3% above the range.

Increasing feed intake in the run-up to calving is sometimes recommended as a way of boosting colostrum production, but this isn’t undertaken in Mr Frost’s herd because it would lead to high levels of colostrum being produced. That’s a situation that would, in turn, be difficult for newly-born calves to cope with – especially as the cows are half Holstein-Friesian and therefore very milky, says Mr Marsh.

Calving began this spring on 10 February with the herd’s 25 replacement heifers. The main herd started calving three weeks later, enabling the first-calf heifers to have some extra time to grow frame and gain body condition before going to the bull on 1 May with the rest of the herd.

The Charolais bulls used at Hopping Farm have top 1-5% Terminal Indexes, with a focus on calving ease, growth and muscle EBVs.

Simon Frost says: “We put the heifers to a Charolais bull, which is something I know few suckler producers would ever contemplate. Most would use an alternative easy-calving breed, but the bull we’re currently using on heifers – Littlebovey Altra – has a Calving Ease Direct EBV of +2.3 and a top 5% Terminal Index.

“He has proved to be easy calving, which confirms his Calving Ease Direct EBV. I intervene less when calving heifers than I do when calving cows.”

During the bulling period, all service dates are recorded for individual cows and the service sire is noted. This provides a predicted calving date for individual animals and is used – in conjunction with visual signs of the onset of calving – to be ready to move cows to one of the individual straw-bedded calving boxes.

“We only assist if necessary,” says Mr Frost. “On average calves take their first intake of colostrum within 30 minutes of being born and we always make sure we’re there to supervise this. If a calf has any difficulty we’ll use a stomach tube.”

Mr Marsh agrees the timing of the first colostrum intake is essential. “There are many causes of calf mortality, but one of the major ones is an inadequate intake of good-quality colostrum. It’s important to achieve a target of two litres of colostrum intake within six hours of birth – an intake level that a calf can achieve through 20-25 minutes of effective suckling.”

Once mothered-up, the cow and calf is moved into a straw yard, but is turned out as soon as weather and ground conditions allow, helping to relieve pressure on accommodation and reduce straw use.

First and second-calved heifers are vaccinated against rotavirus three weeks prior to calving. Any cows calving their third or more aren’t vaccinated, on the basis that they should have developed immunity, which can be passed to the calf through colostrum.

Cleanliness in the calving boxes is vital, says Mr Frost. “We pressure wash and disinfect every three weeks to minimise disease problems, which can often occur with calves born late in the season.”

The navel of new-born calves is treated on both sides and then again after 24 hours.

Ensuring cows have an adequate mineral status – especially copper and selenium – is an essential part of the management at Hopping Farm, which is in a limestone area.

“High levels of soil molybdenum cause serious problems with copper lock-up, so as well as receiving two boluses twice a year, in spring and autumn – to provide copper, selenium and cobalt – cows have year-round access to molassed mineral buckets with a high copper specification, including chelated copper.

“Average intake is 55g a cow a day, but when cows don’t receive this level of copper supplementation, the coats soon start to develop a red tinge. Having an adequate selenium status has also eliminated retained cleansings,” says Mr Frost.

The grass silage offered to the calves has an analysis many dairy farmers would strive to achieve, says Mr Marsh. Analysis: Dry matter 50.8%, protein 13.6% and ME of 11.6 MJ/kg DM.

Intakes average about 4kg a bull a day and problems with acidosis are non-existent.

On arrival at the finishing yards the bulls are fed 4.5kg of barley mix twice a day. After two weeks this is gradually increased to 6.8kg and then to 9kg a head a day. The finishing ration is fed to appetite twice a day in troughs, ensuring bulls always have an edge to their appetite, compared to feeding on a hopper system. Heifers are fed lower levels of barley to grow frame and start on 3.1kg of barley mix, which is gradually increased to appetite by six weeks prior to slaughter to achieve carcass weights of 290-320kg. The first bulls of the current crop have just been slaughtered and full details on bull and heifer slaughter performance and FCRs will be given in a subsequent article.

The silage costs appear low, but this is because they are only the variable costs of making big bale silage at Hopping Farm, which include fertiliser, sprays, baling, plastic and wrapping costs. If the fixed costs of making silage at Hopping Farm are included then it’s costed at £37.08/t (£81.86/t DM for 45.3% DM silage) thus increasing the cow winter feed costs to 83.8p a day.

* Treat navels at birth and 24 hours 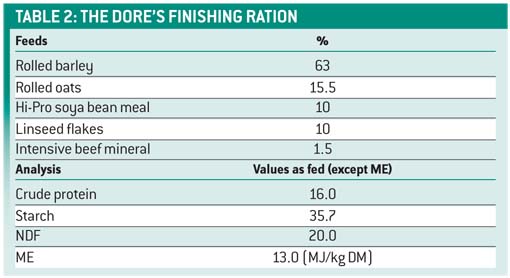 Calves are sold at weaning in October to Alan and John Dore of Home Farm, Glapwell, near Chesterfield, and intensively finished. Last year the bull calves recorded an impressive carcass weight of 438kg at 447 days old.

The Dore’s finish about 600 continental bulls, steers and heifers each year, with the majority bought as suckled calves at 350-400kg.

Creep feeding of the calves at Hopping Farm begins in August and increases to a maximum intake rate of 1.5kg a calf prior to weaning in October.

“Calves are well used to concentrates by the time they go to the Dore’s farm, but they aren’t fed ad-lib. The key is to continue to grow frame and lean carcass, especially with the heifers,” says Mr Frost.

Two weeks before weaning the calves are vaccinated to minimise respiratory disorders. Backs are clipped out and calves treated for internal and external parasites.

This is a unique approach to finishing, says Mr Marsh. “Many nutritionists would advocate a ration containing only 14% protein, using straights such as rapeseed meal and not the ‘luxury proteins’ such as Hi-pro or linseed.”

The Dore’s believe suckled bulls from Mr Frost – with the potential to grow consistently in excess of 1.5kg a day to carcass weights of 438kg by 14.6 months old – need highly digestible by-pass protein sources to maximise the deposition of lean tissue. The inclusion of oats takes some heat out of the ration – oats being higher in fibre and lower in starch compared with barley.