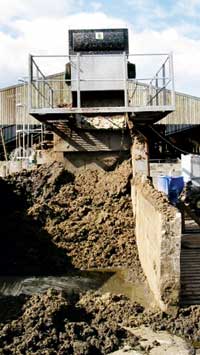 Getting the most nutrient value from slurry is vital, given rising fertiliser costs and NVZ regulations.

Slurry can be worth £273 a hectare to the average dairy farmer if it is used correctly.

With the cost of bagged fertiliser now at its highest recorded price, farmers are being encouraged to stop treating home-produced slurry and farmyard manure as a waste product, but to instead use it correctly as a means of producing cheap grass.

According to Tom Bell, technical specialist at Kingshay, organic manure can supply a large proportion of the nutrients needed for a growing grass crop, not just nitrogen, but potash, phosphate, magnesium and sulphur too.

Treating slurry as a fertiliser

By using slurry as a fertiliser rather than a waste product and applying it when required by the crop, significant savings can be made.

Mr Bell calculates applying three treatments of slurry a year to silage ground on a standard dairy farm would provide 222kg of nitrogen/ha, a total saving a hectare of £273, based on the current price of purchased fertiliser.

He bases his figures on a farm requiring 290kg nitrogen, 61.8kg phosphorus and 218kg potash.

In a time of spiraling input costs, these savings cannot be ignored, says Mr Bell.

“The mental ethos of farmers must change to that of organic, where manure and slurry is seen as a valuable farm asset, not a waste product to be spread when it is convenient. Correct use of on-farm nutrients is integral to producing cheap grass.”

He says organic sources of fertiliser should be treated in the same way as inorganic forms, applying where possible at peak periods of grass growth and demand, and when field conditions are right.

“Farmers would not apply ammonium nitrate on water-logged or frozen ground, so why would they apply slurry?”

A better understanding of the nutrients needed by grazing and silage crops can help farmers maximise returns from purchased fertiliser and reduce the money they waste in producing grass they don’t need.

Changes were made last year to the fertiliser recommendation RB209, published by DEFRA.

Emphasis has moved from producing the optimum quantity of grass from swards to a system-focused approach, in which fertiliser application rates are adjusted to produce the quantity of grass needed for individual production systems.

Stocking rates, milk yields and concentrate inputs all have an influence.

Under the new recommendations, a three-stage process enables farmers to understand their requirements for nitrogen on an individual field basis, both for silage and grazing ground.

Determining the soil nitrogen supply status of every field is the first stage, followed by an assessment of grass growth.

In the final stage, farmers identify the nitrogen requirements for their level of production. These calculations can be made by referring to the tables in RB209.

When and how to apply slurry

May and June are the main months for nitrogen uptake, therefore nitrogen should be applied before and during this period of rapid growth.

Applying slurry between February and April instead of between November and January will increase fertiliser availability by 25%, although this figure is influenced by the dry matter of the slurry.

Application method can have a significant impact on the percentage of nitrogen available, says Mr Bell.

Surface application of manure can result in up to 65% of the total nitrogen being lost at certain times of year, compared to 45% losses through shallow injection. 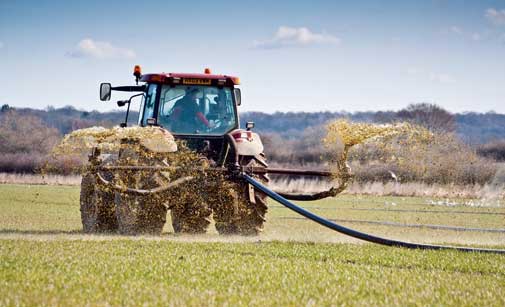 Applying slurry by surface application in winter will result in high levels of nutrient leaching and run-off, but the economics of injecting slurry through the winter are difficult to justify because of the poor nitrogen availability, Mr Bell explains.

“Injection in spring and summer will increase the availability by 15% when compared to surface applications, where 75% of the nitrogen is lost as ammonia into the atmosphere,” he says.

“Not only will money be saved in terms of bagged fertiliser, but it will allow for stock to graze swards sooner, within seven days of application compared to 28 days from surface application. In addition, the mechanical action of slurry injection acts as aeration to the sward, reducing compaction and pruning lateral roots.”

The nitrogen available from slurry is directly linked to its dry matter, so keeping rainwater and parlour washings out of a slurry store will reduce concentration and increase its value.

Livestock farmers can also enhance the nitrogen value in slurry by treating it with inoculants, according to the latest research from Lancaster University’s Lancaster Environmental Centre.

According to its research, an average 150-cow herd could save more than £3400 of nitrogen retained in 200 days of slurry produced over the winter housing period.

Maria-Fernanda Aller, of the Lancaster Environmental Centre, says the treated slurry used in the trial resulted in a threefold improvement in total nitrogen value and an increase in the proportion of organic nitrogen relative to ammonium nitrogen. “The proportion of organic nitrogen in the treated samples was 57% and in the untreated samples this value was 43%. Therefore slurry nutrient value improved following treatment,” says Dr Aller.

Liz Russell, of EnviroSystems, says the findings of the Lancaster University study confirms that increasing organic nitrogen by more than three times helps to retain soil nutrients and prevent their leaching, thereby enabling farmers to further reduce unit input costs and exploit the potential of their land.

“The inoculant also proved to be of value in reducing the levels of harmful greenhouse gases emitted through retention of the carbon in the treated slurry,” she said.

Ceredigion dairy farmer, David Phillips, has calculated that treating slurry in his 500,000-gallon storage tank with an inoculant is contributing to annual fertiliser savings on his maize crop of about £800.

Mr Phillips, who runs a 250-cow pedigree Holstein herd at Trebared Farm, Cardigan, says the inoculated slurry has been enhanced to the extent that he no longer applies artificial fertiliser to 60 acres of maize, a crop which has been grown in the same field for 10 years.

“We used to apply 50kg/acre ammonium phosphate down the spout, and a further 50kgs N/acre top dressing. However, since we’ve started to apply the inoculated slurry to the maize fields in the last six years, we began to realise that we were able to grow a high-quality maize crop without any purchased fertiliser,” he says.

“We initially did our own trials, and applied a portion of the area of maize sown without any fertiliser and found that yield was the same as that area treated. The results gave us the confidence to stop all fertiliser applications.”

“We can now depend totally on slurry for N, P and K. We are confident the inoculated slurry is helping to improve the soil’s residual N and we are also taking samples of soil for analysis for P and K indexes, which are being maintained at between 2 and 3,” he says.

Another new technology that is helping farmers to get the best out of their slurry is mechanical separation.

Dry matter content has a direct connection to nitrogen content, therefore the drier the slurry the higher the concentration of total nitrogen.

Mechanical separator systems can reduce the volume of storage required for solids by 20-30%, and the liquid can be applied to grassland or arable crops by a low-cost irrigation system. Solids extracted from slurry, meanwhile, can be stockpiled and applied to fields by conventional manure spreaders.

For some producers, this may be enough to avoid having to extend conventional storage facilities to cope with NVZ spreading restrictions or herd expansion.

Most separators work by sweeping slurry across a screen that allows the liquid to drain through while retaining the solids. Others use screws that exert more pressure on the material to extract more moisture.

Becky Floate, of The Dairy Group, says the biggest advantage of separators is that it makes slurry easier to apply. “The separated liquid doesn’t crust or block the equipment used to apply it – like injectors – and the solids can be stored as farmyard manure until it is needed,” she says.