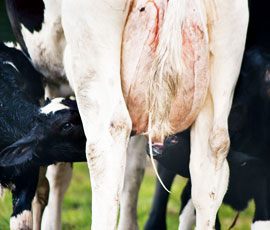 Getting the right start to a calf’s life through proper management of colostrum is vital to securing an animal’s long-term health and productivity, writes Caroline Stocks.

Without access to colostrum within the first few hours of birth, an animal can be consigned to a life of increased infections, susceptibility to pneumonia and even problems in lactation.

It is a risk which vet and DairyCo Cumbria and Lancashire extension officer Karen Lancaster says can be overcome through planning and herd management.

“Calves have no innate immune system, which means they are born without protection against disease. The first thing they get to protect them is colostrum,” she says.

“As soon as they are born their gut is quite porous, which allows them to actively absorb immunoglobulins – the antibodies in colostrum.

“But their gut starts to close after 12 hours and by 24 they can’t actively absorb it. Getting it into them quickly is very important.”

Ms Lancaster says without the initial feed of colostrum, it can take between three to four weeks for a calf’s immune system to start functioning. “All through that period they are exposed to bacteria and illness and we see problems with gaining weight and weak calves. Research also suggests it affects calves later on, making them more prone to pneumonia and affecting lactation,” she adds.

While timing is key, quality of colostrum is also an important factor, Ms Lancaster says.

“As well as transferring immunoglobulin to the calf, colostrum also has lots of energy, which is different from the milk you get from a cow later on. To get the best quality, a cow needs to be in really good condition at the time of calving. If it’s healthy with good body condition it will give the best colostrum.”

An instrument called a colostrometer can help measure the quality of colostrum, she adds. If it is dense and contains a high amount of immunoglobulins, collect extra to freeze as emergency supplies (see below). If it is of poorer quality, use stored colostrum or – as a last resort – a colostrum replacement.

“Replacers are of incredibly variable quality,” she says. “The levels of antibody vary, but even if you get one with a good level, it is not specific to the bacteria on your farm. Colostrum from your own farm is always best.”

Conail Keown, dairy development advisor at the College of Agriculture, Farming and Rural Enterprise (CAFRE) in Northern Ireland, agrees timing and quality are key, but getting the right volumes of colostrum in a calf is also paramount.

“Lots of research points to calves needing 10% of their bodyweight for the first intake of colostrum. I work with Holsteins and the standard calf needs between one-and-a-half to three litres,” he says.

“What’s also important is the continuance of feeding colostrum. The first six hours are important, but ideally the first 10 feeds should be targeted with colostrum. The quality from the dam will reduce over that time, but the milk is still providing vital antibodies.”

Recent research suggests about 40% of calves left to suckle do not get enough colostrum. So to ensure the calf receives the right amount of colostrum, Mr Keown says farmers should take it from the cow after it has calved and feed it to the calf by hand or via a feeding tube.

Taking colostrum from a cow after it has calved also allows a farmer to pool the liquid to build up stocks for later feeds, and helps to improve the quality of colostrum from heifers who have not had as long as other cows to build up immunity to bacteria in the herd.

In addition, having a pooled supply of colostrum means calves from cows with Johne’s disease can also have access to colostrum.

“If you have Johne’s in the herd it’s possible it might be shed into the colostrum, or it might get into it via faeces on the cow’s teats,” adds Ms Lancaster.

“Carrying out regular Johne’s testing, using colostrum from low-risk cows and having extremely high levels of cleanliness will all help in the battle of giving calves the best start in life.”

Colostrum from your own farm is best for your calves, so we encourage farmers to take extra and freeze it so they know they have the quality, says Ms Lancaster.

“Make sure you harvest it as quickly as possible after calving. As soon as a cow calves it has an udder full of colostrum, but as it starts to produce more milk it waters it down.”

Before putting it in the freezer, producers are advised to think about how they are going to use it on their farm.

“You need to be able to defrost it quickly to feed a calf. Lots of people used to freeze it in cartons, but that causes problems when you come to defrost it,” she explains.

“You have to defrost it slowly as putting it in the microwave ruins the immunoglobulins. We now recommend using zip-lock freezer bags – they have a large surface area and can be defrosted quickly in a bucket of hot water.”

While some people store colostrum for up to a year, Ms Lancaster says it is best to label the bag clearly so you know when it was collected and use the older supplies first.

“If you’re going to freeze it, ideally know the Johne’s risk of the cattle, and make sure it’s labelled with the date and the cow’s ID so you know if any health problems relating to that cow arise, you can take its colostrum out.”

• Consider feeding the calf by bottle or tube rather than waiting for it to suckle. This way you can ensure it takes on the right volume of colostrum

• Give calves the best quality colostrum you can, by ensuring the dam’s health is as good as it can be ahead of calving

• Cleanliness is vital as new-born calves have no immune system. Ensure cows are on fresh bedding when they calve and their teats are clean so risk of bacterial contamination is reduced.

If you had visited Brighthams Farm, West Sussex, six years ago you would have found the Nash family buying in replacement heifers. These days, following a revamp of the farm’s heifer rearing system, there is a surplus of replacements and last year 20 in-calf heifers were sold from the farm.

Herd manager Tony Brooks says: “We had a really bad year in 2006-07 when pneumonia cases went through the roof. So after that we had to make changes, and I would say the most important thing we have changed is that we are now very strict with colostrum.”

Once Johne’s was discovered in the herd a few years ago, all cows were tested and infected cows were red tagged. Colostrum is now selected from the better cows – based on the results from colostrum testing – and frozen to then be given at a rate of three litres a calf.

Mr Brooks explains: “By testing the colostrum, we realised that our cows weren’t very good at it. So we have collected the best we can and we give every calf three litres of the good stuff, rather than six litres of watered down stuff.”

Kevin Beatty runs a 220 Jersey herd in Carlisle, Cumbria. He says he has become ‘ruthless’ in his calf and colostrum management regime to ensure herd health is maintained.

“I bought 200 cows recently and 10% of them had Johne’s disease,” he says. “I culled the positive cows and now I am testing the remaining cows’ milk and their blood to make sure they are clean.

“It’s vital the disease doesn’t spread in my heard, so if anything shows up, replacement calves will be snatched away and put on a clean cow. And if we think the calf has consumed any infected colostrum we will cull it straight away.”

He adds: “Johne’s only shows up in cows once they’re three years old, so we keep good records of the calf. That way we can go back and check history and that of its siblings if the disease shows itself.”

With clean cattle, calves are left to suckle with their mothers for the first four feeds – 24 hours – to ensure they have plenty of colostrum.

“As long as a cow is clear, we leave them alone. I haven’t found snatching them away is beneficial.”

The calves are then put on automatic feeders with powdered milk – a system that has saved costs and proved successful for calf management.

• Factsheet 1: Colostrum – getting the right start