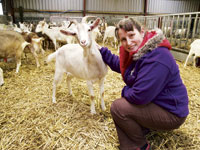 A dairy goat producer who sells her billy kids and cull stock to Asian and Caribbean outlets believes there is huge potential for growth in this market if goat meat could be promoted alongside lamb, beef and pork.

Loraine Makowsky-Heaton produces healthy-eating goat’s milk products from a herd of 200 goats, but refuses to cull her billy kids at birth. “We would rather they go for meat than get culled at birth, which is what happens to most male kids on commercial dairy goat farms,” says Ms Makowsky-Heaton, who runs a herd of Saanen, Anglo Nubian and Toggenburgs and experimental cross-breds.

“There is demand for the meat from restaurants and people are beginning to realise it is tasty and healthy alternative to other meats.”

One of her Asian customers is looking to source between 10 and 100 goats a week. “We know we can sell goat meat, the market just needs educating,” says Ms Makowsky-Heaton. “We have a goat meat producers’ association in Wales, but it would need money to market the meat and someone would need to be employed to do the marketing. I would like to see Hybu Cig Cymru (Meat Promotion Wales) given the remit to promote it alongside other red meats in Wales.”

Prices are comparable to premium lambs, but the carcass of a dairy goat is smaller. The age Ms Makowsky-Heaton slaughters her goats depends on the customer, but most are kids, up to the age of 11 months. Her Asian customers, however, prefer stronger meat from an older goat, so cull female goats are sold to this market. “We cull female goats up to the age of six, but we would also look at culling younger females that aren’t milking as well as they should be.”

All the male kids are castrated at birth for ease of management. They are fed lamb creep nuts, low in sugar because of the susceptibility of goats to urinary calculi. “Some of the feeds you buy off the shelf can be quite high in molasses so we always go for more expensive feeds,” Ms Makowsky-Heaton explains.

Management of the herd is largely similar to that of sheep. They are prone to the same diseases, but are browsers rather than being grazers which can make managing the grass a problem. When Ms Makowsky-Heaton reseeds she includes a herb mix to make the ley more interesting. “If you can make a ley interesting then goats will graze,” she says. The goats are milked twice-a-day through a 12:6 herringbone parlour, installed so it can be doubled up.

They get an 18% protein concentrate in the parlour, according to yield. Average lactation is between four or five, although some can go on longer. During winter the goats are loose housed on straw and fed hay or haylage. The goats are slaughtered at the Cig Calon Cymru abattoir in Cross Hands.

Ms Makowsky-Heaton’s main enterprise is producing luxurious hand-made chocolates, fudges, cheeses and yogurt smoothies under the “Kid Me Not” brand.

She moved with her family to the 20ha (50 acre) Ffynnongrech Farm at Talley, Llandeilo, in 2002. The land had not been worked for several years, but the farm’s holiday cottages provided a source of income while plans were put into place to grow the goat enterprise.

By the end of the first year goat numbers had increased to 20, all milked using a hand-milker and bucket. Then came the moment when the seed for the “Kid Me Not” brand was sown. Ms Makowsky-Heaton’s daughter, Amy, then four-months-old, had severe eczema to the point where doctors recommended a course of steroids. Ms Makowsky-Heaton instead put her on an exclusive diet of pasteurised goat’s milk and within two weeks her eczema had cleared.

When Amy was weaned off milk, Ms Makowsky-Heaton started to make her treats using goat’s milk, including fudge. It was this product that launched the “Kid Me Not” range. Within months Ms Makowsky-Heatonhad purchased a container and equipment from America and production started at Ffynnongrech Farm. She later installed the herringbone milking parlour.

Yogurt production followed and, after increasing goat numbers, she found herself in a position where she was dumping milk. A chance conversation with the owner of Carmarthenshire Cheese Company led to an agreement that he would make branded “Kid Me Not” cheeses on her behalf.

To learn more about goat production and opportunities it offers visit the Dairy Event and Livestock Show at the NEC, Birmingham, on Tuesday 7 and Wednesday 8 September. For more information click here.