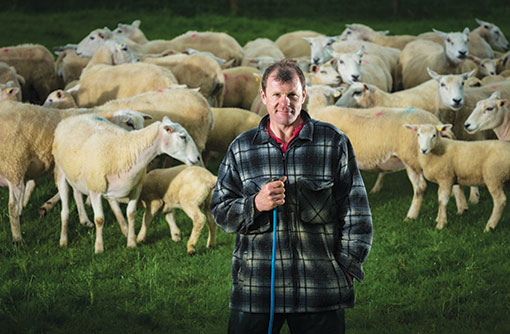 One Northumberland sheep producer is showing that a clear focus on grassland management and picking a breed that can thrive off grass can help make a business more sustainable.

Relying totally on grass and forage and eliminating bought-in feeds is the crux of running a profitable sheep production system, according to Northumberland sheep producer Duncan Nellis.

Back in the 1990s the family was running about 850 Mule ewes at their Thistlehaugh Farm, near Morpeth, but even in years when prime lamb prices were considered to be good, the amount of cash having to be re-invested every year in flock replacements was a major drain on income. It triggered a re-think.

“We wanted to take hold of our own sheep breeding objectives. As well as wanting to eliminate the cost of bought replacements, it was clear health issues were becoming more important and we didn’t want to always be at the risk of buying-in other people’s problems,” says Mr Nellis, Farmers Weekly’s Sheep Farmer of the Year finalist 2012.

Getting lamb growth and profit

Now Mr Nellis runs a flock of 1,600 Lleyns that last year earned him a gross margin a ewe of £94.

The bottom 25% of the flock is crossed with Hampshire Down and Charollais tups, but the remainder stays pure.

The first lambs to go are those by the Hampshire Down and this year there was a batch that gained an average 360g a day and were finished by 62 days. The average finishing time is 73 days, with lambs sold deadweight at a target weight of about 19kg.

“To get this level of lamb growth out of a bag wouldn’t be possible without some serious issues,” says Mr Nellis. “We don’t have any pregnancy toxaemia problems and we believe it’s because we don’t feed any concentrates.

“Our system is designed to secure our future as sheep producers because we’re not at the mercy of the grain market or the fertiliser market and we don’t have to spend income on replacements.

“We want to be profitable, but we do not want to rely on the SFP to do that. We certainly feel more in control of the business and even though lambs were £13 a head back last year compared with 2011, I think we’ll still be OK. It wasn’t a disaster for us.”

The Mule flock was traditionally managed and ewes were fed up to 1kg of concentrated pre-lambing. Lambs were sold both deadweight and through the ring, but new ways of improving flock efficiency and profitability were always being considered.

An all-straw diet with higher concentrate feeding was tried while some of the Suffolk- and Charollais-sired ewe lambs out of the Mules were retained with the intention of producing a higher-value prime lamb.

“There was too much slack in the system and not enough money coming into the family business. We were building up for a major change in the way we did things – and initially that’s what led us to switch from the Mule to the Lleyn.

“We were impressed with what we’d seen of the Lleyn, but as well as recognising its potential as a commercial breeding ewe it was a breed that would enable us to retain our own replacements and so remove the annual cost of having to buy-in every year. We could see a lot of advantages to running an enclosed flock” says Mr Nellis.

Making the most from grass

At the heart of Mr Nellis’ sustainable system of sheep production is grass management: “We’re far more focused now on keeping our grazing in a vegetative state for longer compared with how we used to farm. We want to make the optimum use of the grass we can grow.

Mr Nellis says he’s got a more mobile approach to grass management, operating a system of controlled grazing with electric fences and using the 130 suckler cows as part of the rotations.

In 2005 the decision was taken to farm organically and by 2007 the farm achieved organic status. “Going organic was the big driver that encouraged us to look at an all-grass system that relied heavily on red and white clovers and encouraged us to stop feeding concentrates.

“We’re now getting very close to an all-grass winter system for the ewes, although we do still feed some red clover silage towards the end of the winter and will provide blocks if the weather is really bad.

“Grass is hugely underestimated in terms of its feed value for sheep. We analysed our winter grass at the end of last January and we’re seeing protein levels of 19.3% and 11.2 ME. About 25% of the farm is ridge and furrow and even these pastures were about 11 ME and 17% protein.

“Feeding 1,400 ewes out of a bag on a diet of that quality would be pretty expensive. And once we get into spring grass we know it’s absolute rocket fuel,” says Mr Nellis.

Summer grazing management for the flock is a combination of set-stocking and electric fencing. The current winter grazing system is based on a four-day paddock regime, with sheep grazing up to an electric fence and with a back fence also in place. “It’s not really labour intensive if you can get them into batches of up 400-600 ewes.

“After Christmas we’re allocating 1.8kg of dry matter a head a day to feed a 65kg ewe. About four weeks after tupping we do tighten up the grazing a bit and allow them to eat off half the allocation from the area they’re given. We then move them on to fresh ground so that there’s a little bit of cover left on and we can come back to it again in the new year. We also grow brassicas to supplement the grazed grass,” he adds.

The farm, which is fully EBLEX monitored and costed, has a current stocking rate of 11 ewes/ha all year round.

When the weather stays kind there’s enough grass on the farm to graze the ewes without having to resort to feeding silage. But all ewes are sheared in batches about two months before lambing and housed for two weeks before being turned out again, so some silage will be needed for this period.

Mr Nellis admits that 20 years ago he wouldn’t have thought it possible to manage a commercial ewe flock relying on grass alone and no concentrates. “But why not?” he says. “Grass can support sheep when there’s enough of it and it’s of the right quality.”

The farm doesn’t use dual-purpose leys, but they must have a high white clover content. Grazing leys now contain more winter active species such as tall fescues and cocksfoots and no early heading rye grasses are sown. Re-seeding is also triggered by the emergence of too much meadow grass creeping into the sward and other unwanted native grasses. Mr Nellis says most leys last for between five to seven years.

“White clover blends are used at 2.5kg/ha, but we find that grazing management has a big effect on clover sward content. Red clover is used with a ryegrass and perhaps some timothy for conservation and aftermaths for finishing lambs.”

Mr Nellis is convinced running a closed flock has its advantages. “We monitor every stage of the business in terms of performance and costings and all ewes are individually recorded. This means we can take out any ewes we believe aren’t performing on our system so we can concentrate on the genetics within the flock that are most suited to the way we do things.”

MORE ON THIS TOPIC