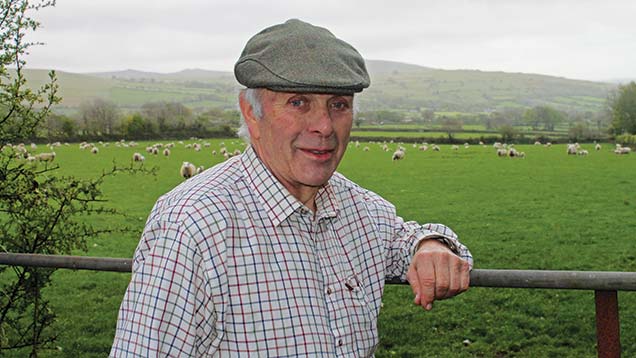 An upland sheep farmer in Devon has dramatically increased grassland productivity and lamb growth rates with a new system of overseeding poor pasture.

George Hill, who keeps 500 Texel ewes at Kingsett Farm near Mary Tavy on Dartmoor, had previously struggled to get reliable results from reseeding.

“Last time I got a contractor in it almost all failed, which made it very expensive,” he says. “But with this new direct overseeder I have no doubt whatsoever that it will work.”

The slot seeder sets the grass seed in rows 7.5cm apart and no more than 1cm deep, and then covers it back over with individual rollers, making for reliable soil/seed contact even on bumpy or uneven ground.

Trials have shown it boosts germination and distribution to about 96%, compared with below 40% and 80% respectively with a tine harrow, broadcast spreader and rear roller.

So far Mr Hill has oversown or resown 16ha of the 136ha farm – which runs up to 320m above sea level – and plans to roll that out as grazing numbers allow. “I did the worst two fields first – they had almost reverted to moorland so had virtually no grazing value at all,” he says.

He spread 4cwt/acre of granulated lime in July last year – to combat the acidity of dead grass after it had been sprayed off with glyphosate – before burning the matted foliage off on 19 August.

“On 20 August we drilled a mix of high sugar grasses – and then it didn’t rain until 29 September. We really wondered if it would grow but after the rain it just took off.”

Mr Hill grazed the fields until November, and then turned out 100 ewes and lambs on to 6ha from 28 March. “It had no fertiliser until 17 April when we applied urea, and we grazed it for a week on, a week off for four weeks before shutting it up for silage. I just can’t fault it – the grass puts the rest of the farm to shame.”

With fertiliser and calcified seaweed trials being held on the farm, when the grassland was tested in mid-March, it tested at a D value of 76 and metabolisable energy of 12.1MJ/kg DM. “The old pasture wouldn’t have been worth much more than straw,” says Mr Hill.

Last year, he happened to graze neighbouring fields – one of which had been drilled with high sugar grasses and the other of which hadn’t – with comparable groups of lambs.

“They grazed it for eight weeks and went to slaughter on 28 January. The average weight on the old grass was 18.37kg, with 15 grading at E, 15 at U, and eight Rs,” says Mr Hill. Fat classification comprised 31 head at grade two, and seven at 3L.

In contrast, the group grazing the high sugar pasture weighed an average of 23.47kg, with 28 grading E, 15 U and three R. The fat classification was also higher, with seven at grade two, 35 at 3L, and two at 3H.

“It’s clear we’re losing a lot of performance because of the poor grass we’re growing,” says Mr Hill. “It cost me £130/acre to reseed, including the seed, drill and lime. Plus I spent £10/acre on applying fungicide to keep flies away after using the glyphosate. I think output will increase fourfold so it should pay back within a year and last about seven.”

Mr Hill plans to graze his best lambs on the new pasture to finish them faster – and is even experimenting with his breeding to produce a lamb with higher performance.

“About 25 years ago I was speaking with a New Zealand breeder and recommended a three-quarter cross between a Romney and a quarter German milking sheep. We’re now importing them back to the UK as Highlanders,” he says.

“But they’re too big for our system, so I’m developing a three-quarter cross using a Dutch Texel instead. Dutch Texels are really hardy little things, but they’re a bit too small – the German milking sheep adds size and a very sweet, marbled meat. You should get a lambing percentage of 180% and carcass classifications of U and E.”

Mr Hill has produced his first three-quarter cross lambs this spring, and hopes to persuade high-end supermarkets to carry out taste tests with the aim of developing a premium market. “I think they’re the sheep of the future for this type of grassland,” he says.