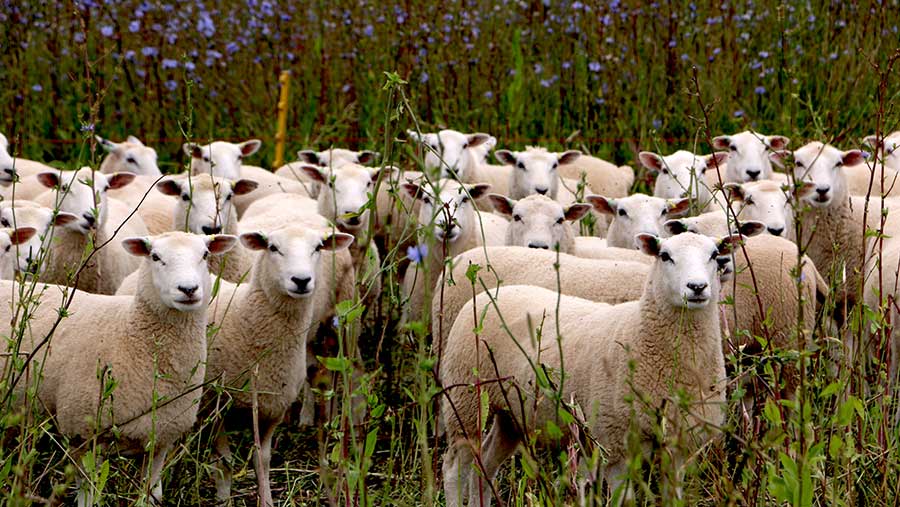 They key difference that sets mob grazing apart from rotational grazing is that paddocks are rested for longer and are grazed at much higher grass covers.

This has multiple benefits for the plant and soil structure, helping to build more resilience in periods of wet and dry weather. It can also be beneficial for stock; reducing worm challenges.

We find out more about the technique and speak to a farmer practising it.

Q. What is mob grazing?

Mob grazing is an intensive rotational system that sees high stocking densities of livestock moved regularly (every one to three days).

Q. How does it differ from other forms of grazing?

It increases grass use by 28% to 78%, compared with set-stocking, according to the AHDB. However, grass use would be higher in non-selective mob grazing because animals eat all the biomass available in the area. Whichever system you opt for is down to personal preference.

Q. What grass varieties can be used?

Pastures can be made up of herbal leys or permanent pastures.

Herbal leys are preferable because they aim to replicate traditional pastures with a diversity of clovers, grasses and herbs, and with deep roots they are more resilient to weather extremes.

Choosing a herbal mix that suits the system is important, he says. For example, the ley sown at Honeydale suits the light, dry, calcareous soil which is prone to drought.

Herbal leys should be sown between April and August, when the soil temperature is over 8C to ensure all the species germinate. Fast, early clover growth will quickly cover the ground and help protect it from drying out.

Mr Wilkinson also sows buckwheat at 20kg/ha (8kg/acre), which acts as a nurse crop and releases phosphate into the soil.

Q. What are the benefits of mob grazing? 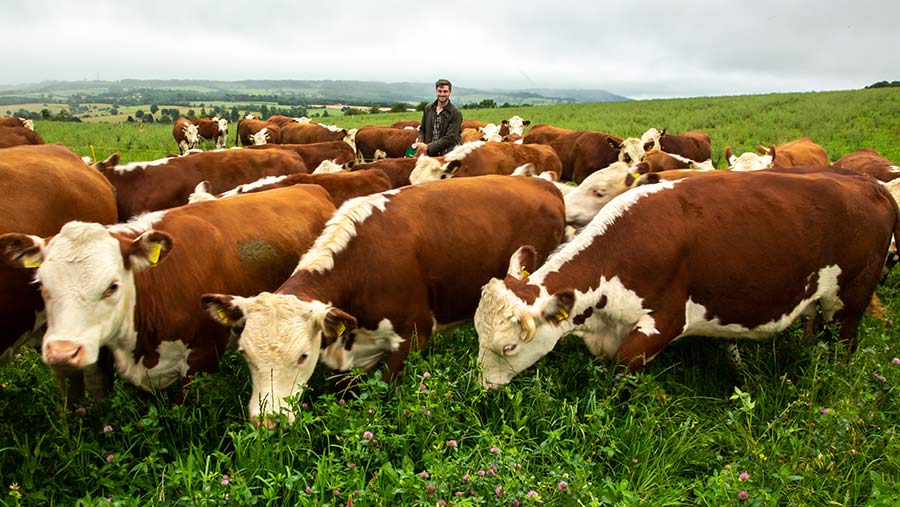 Ian and Cathy Boyd are achieving growth rates of 1.32kg/day by mob grazing their herd of pedigree organic Hereford cattle on herbal leys.

The farm has 45 pedigree Hereford suckler cows which calve in the spring. They are mob grazed from April and calves are weaned at nine months. Cows are outwintered on diverse leys and supplemented with hay. Progeny are fed haylage indoors from November until the following spring.

The following year they are mob grazed, followed by suckler cows on the platform.

Growing cattle are turned out to graze in April in mobs of 54 and are followed by another group of 56 youngstock (one to two years old) on paddocks between 0.4ha and 0.8ha. They enter tall grass covers of about 30cm and are moved every 24-48 hours, leaving a residual of at least 10cm.

“In the spring we want to ensure there is enough cover for at least one cycle of grazing before we turn the cows out,” says Dale Webb, farm manager. “We rest the pastures for about 30 days when the grass is growing, extending up to 90 days when the growth slows – to give the grass longer to recover.”

They use herbal leys comprising a cocktail of ryegrass, Timothy, cocksfoot, plantain and chicory, to name a few. The farm is currently in the higher-level organic Countryside Stewardship scheme, which helps to cover herbal ley establishment costs (see “Establishment costs”).

“The legumes work well for fixing nitrogen and the clover provides a good source of protein,” says Mr Webb.

From the end of May to early July 2020, the cattle averaged a daily liveweight gain of 1.32kg on herbal leys alone.

Although weights stall over winter due to the slower winter growth, they compensate in the spring to finish at 24-30 months at an average of 535kg liveweight.

The farm also grows 40ha (98 acres) of cereals and he says the herbal leys are helping in the fight against blackgrass.

“Since using herbal leys, blackgrass is not an issue. The deep roots improve drainage, making the ley more resilient, as well as pulling up nutrients from deeper in the soils. Visually there is a big difference in soil structure and there are a lot of worms.”

Herbal leys are undersown into arable crops such as barley in April and grazed once established after harvest.

In comparison, arable ground which hasn’t been undersown with a herbal ley has notably worse soil structure, he says.

Another advantage of mob grazing herbal leys is that it has reduced wormer use. “Birdsfoot trefoil and sainfoin have high tannin levels [which disrupt the parasites’ life cycle],” says Mr Webb. “We move the cattle every day so the worms are left on the pasture and the cattle are not returned until the parasite cycle has finished.”

“It is also better for stock management. It’s easy to see if an animal is ready for slaughter or unwell, given the high stocking rates and frequent movement.