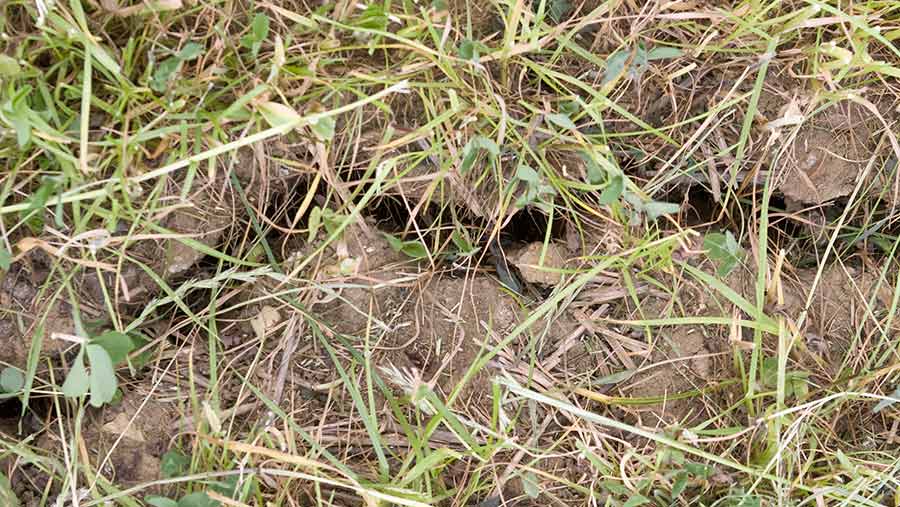 Grass seed sales have spiked over the past six months following reseeding efforts on farms to repair scorched and patchy leys after the 2018 summer drought.

Seed merchant and grass breeder Germinal has reported a 50% rise in sales. Mild autumn conditions allowed reseeding as late as November in some areas.

See also: How to maximise your farm’s spring or autumn reseed

However, due to persistently dry conditions, some grassland didn’t establish, with some farmers drilling too deep in a bid to capture moisture. Others were caught out by leatherjackets, with spray treatments no longer available.

“The temptation last year was to drill deeper because some people thought they needed to get closer to the moisture deep down,” she said.

“But the deeper you go the cooler it gets and perennial ryegrass needs a soil temperature of 5-6C to get growing.”

Italian ryegrass grows at 3C while clover needs 7C. Depths of 2cm can leave you with 80% establishment, and seeds sown at 6cm can result in lower establishment rates of just 20%, trials have shown.

With a range of situations and challenges presenting themselves on UK farms, soil and grassland consultant Nigel Howells, of Nigel Howells Consultancy, stresses that it is vital to know your soil health before spending money on seed, fuel and labour.

With some farms looking to replenish feedstocks, Mr Howells says cereals and wholecrop mixes might be an option. Drilling a 75% rate of wholecrop with barley and peas and 100% rate of a perennial ryegrass variety could work well.

“This will provide shade and shelter for the young grass crop,” he says. “You can take the wholecrop in July and then graze or silage the ryegrass underneath.”

He says cereal/wholecrop mixes undersown with ryegrasses should be harvested 10 weeks after sowing so the pasture can thrive in late summer and not be shaded out.

With no spray treatments available for leatherjackets it is important to assess if they are the reason why your grassland swards are patchy, says Mr Howells.

“They are laid as cranefly eggs between July and September and eat grass roots and stems, and April/May is when most damage and activity occurs,” he says.

“If you’ve had poor grass regrowth then the chances are leatherjackets won’t be a problem as their habitat is grassland.”

The best advice is to have a break crop to disrupt the fly’s life cycle, he says. Brassicas or a fast-growing Italian ryegrass are good ways to do this before returning to grass.

Mr Howells recommends digging a test hole and inspecting the top 5-8cm of soil. If the problem is bad, it’s best to let the birds feed on them after inversion ploughing.

Other issues farms may face this spring

Nigel Howells advises: Lots of farms are suffering from shallow compaction from livestock and tractors. A lack of worm casts can be a giveaway that your soil is short of air and oxygen.

If you think shallow compaction is an issue then aerators can be used when soils are damp and drying – avoid doing this after heavy rain.

Most shallow compaction is in the top four inches, so getting the fins of the aerator down six inches should suffice and if the soil is drying it will create cracks deeper than that.

Nigel Howells advises: Basic soil tests are a good start, but a more detailed Albrecht test can be used across similar fields. This works out not just what is present in the soil, but what is available to plants and can cost as little as £10-£11/ha.

Fertilise accordingly, making sure phosphate and calcium are provided to give the plants the best start they can get. Calcium is needed for plants to access nutrients, and phosphate is needed to drive root growth.