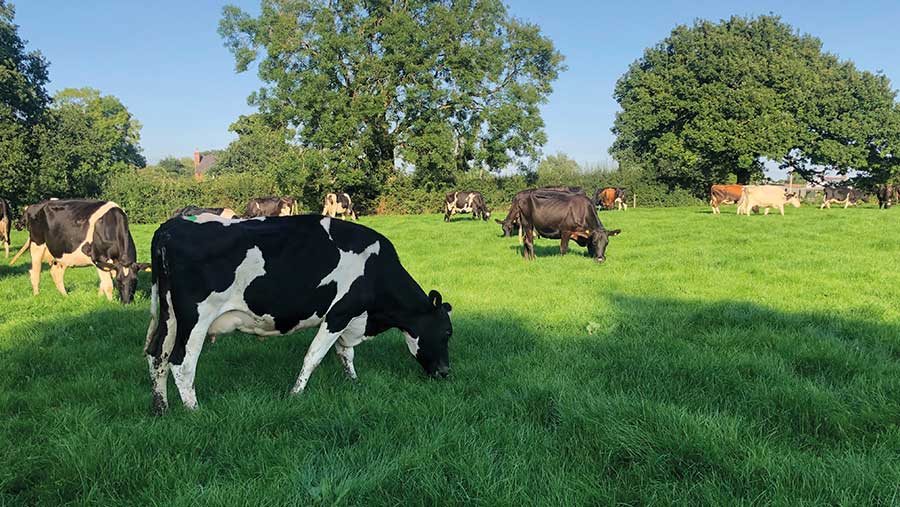 Careful budgeting of grass through the autumn is central to the success of the dairy farming system at Clive Hall Farm near Winsford in Cheshire, where owner/manager Phil Asbury describes the autumn rotation as “spring in reverse”.

This indicates the precision with which he manages his autumn grazing, to make the most of late-season grass and extend his grazing season.

Milking 210-head of mostly Friesians and some Jersey crosses, he aims to graze 60-65% of the farm between 7 October and 7 November. The remainder is grazed from 7 November until average farm covers reach 2,250kg dry matter (DM)/ha.

This mirrors the first round of grazing in spring, which is targeted to run across the whole 64ha (158-acre) grazing platform from 10 February until 10 April.

This conventional approach builds a steep grass wedge – in other words, a succession of paddocks ready for grazing, with the highest covers at more than 3,500kg DM/ha and the last building up to this level over the weeks ahead.

Plate metering continues weekly, forming part of the farm’s participation in Forage for Knowledge, AHDB’s grass monitoring project. However, it is essential through the autumn months when every action is taken to maintain grass growth rates and extend the herd’s grazing.

These crept up to 2,350-2,400kg DM/ha at the beginning of September when the reduction in daylight hours is said to make another cut of silage unlikely.

With demand from the spring calving herd now standing at 55kg DM/ha a day, Mr Asbury predicts covers will build through September to reach an average across the farm of 2,600kg DM/ha at the beginning of October.

This sets up the system well for the final round of grazing, when grass is budgeted carefully to take the herd through to late November.

“I prefer to have a bit of grass stacked up at that time of year as you don’t want to end up feeding silage or extra corn, which is so much less economical,” he says.

With limited housing, he employs several tools to stretch the grazing season without eating into next spring’s feed.

“If the infrastructure and management are right, you can generally get through the wet weather,” he says.

The farm is closed for winter at an average cover of 2,250kg DM/ha, although with milder winters, some swards can increase to 3,200kg DM/ha before turnout.

“This may be more than ideal, but it provides us with a safety net for spring, and I know I can carry heavier covers on this farm,” he says.

There’s only a low chance of frost or snow, so less chance of winter kill, he adds.

“However, these decisions are very farm-specific, and you really need to know your farm and your facilities.”

An alternative: creating a flat wedge

The idea of building a steep wedge has been challenged by grassland consultant, Andre Van Barneveld from Graise Consultancy, who advises a different approach.

His primary target, of achieving a ‘flat wedge’, is said to give optimal pasture availability, utilisation, and regrowth in the following spring, while maximising pasture intakes in autumn. The approach sticks broadly to many existing principles but fine-tunes the detail.

Disadvantages of building a steep wedge

He says high grass covers through the last grazing round (anything over around 3,300kg DM/ha) are not utilised efficiently and decline in feed value as the base of the sward turns pale and stemmy.

Furthermore, if paddocks are missed from grazing altogether – which is not uncommon as the weather breaks in the autumn – high covers don’t carry through the winter well, potentially decomposing at the base. This compromises the quality and utilisation of grass in the first grazing round the following spring.

Grazing high autumn covers also puts pressure on cows in milk, even in late lactation. Dry matter intakes will inevitably decline while both the digestibility and metabolisable energy of the grass consumed will be lower.

The argument for building a ‘flat wedge’

Against this backdrop, Mr Van Barneveld advocates managing the last grazing round by allowing pre-grazing covers to rise from around 3,000kgDM/ha at the end of August to around 3,300kgDM/ha by the start of the last rotation. He also works with a shorter, more condensed last rotation closer to 40 days (from 10 October to 20 November, location-dependent).

However, this may mean taking some paddocks for surplus silage in September if paddocks are at risk of exceeding the cover targets – something that’s anathema to many livestock producers.

He says the traditional target of grazing 60% of the platform in October and 40% in November still applies, while the target average farm closing cover on around 20 November for most farms should be 2,150-2,200kg DM/ha in as flat a wedge as possible.

Benefits of building a ‘flat wedge’

He says producers who have tried the flat wedge approach have raised their output, preserved ground conditions, lengthened their grazing season, improved their opening covers the following spring, and gained the worthwhile financial benefits of producing more meat or milk from grass.

This article forms part of the AHDB Grass Campaign which aims to help producers make better use of home-grown grass swards, both grazed and conserved