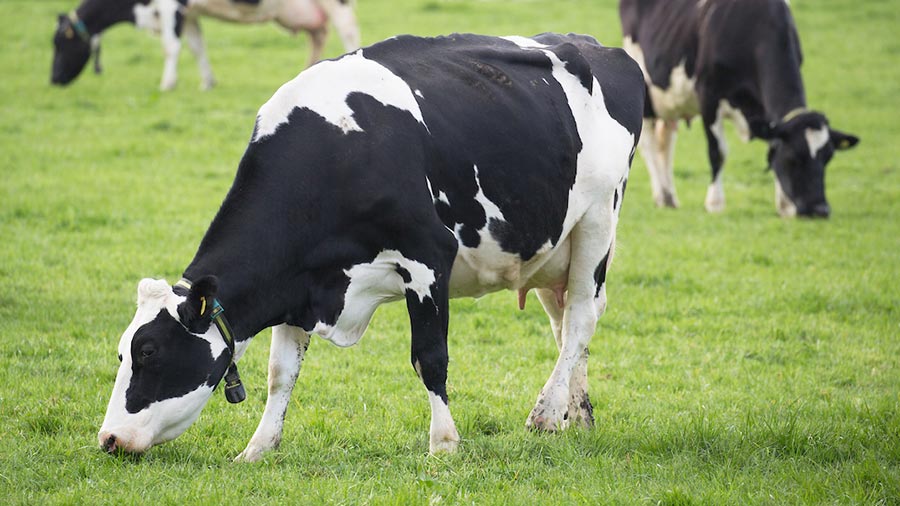 Bloat, also known as ruminal tympany, is a build-up of gas within the rumen and reticulum due to a failure to eructate (belch). Bloat may be considered primary or secondary.

Primary bloat is caused by the formation of a stable foam within the rumen.

This foam traps the gases of fermentation, preventing gas pockets from coalescing, resulting in a build-up of gas within the foam which the animal is unable to expel.

Certain soluble leaf proteins are thought to contribute to the formation of this stable foam.

Pastures of red clover, white clover and lucerne have the greatest propensity to cause bloat, but grazing cereal crops, rape and young grass can also result in bloating.

Secondary bloat is where the animal cannot eructate owing to physical obstruction of its oesophagus by, for example, a tuber or a root. This article will focus on primary rumen bloat.

Sam Cottam, Synergy Farm Health, provides advice on how to treat bloat and avoid cases in the future.

Bloat incidence is highest during the spring and autumn – corresponding to lush, leafy pastures containing high levels of soluble proteins that are rapidly digested.

It is greater following the interruption of grazing, for example, following a storm, or housing overnight, after which cattle graze more intensively.

The severity of clinical signs varies enormously. Bloat is a common cause of apparent sudden death in cattle.

When bloat is observed:

Control strategies include grazing management to accustom cattle to pasture and the strategic use of antifoaming agents or surfactants.

The safest method of control is to avoid high-risk grazing during high-risk periods; consider allocating such pastures to silage if alternative grazing is available.

If high-risk pastures are to be grazed, cattle should be fed high-fibre forages, such as hay, before turnout.

This ensures that cattle do not gorge on the new pasture and intake of the at-risk forage is initially reduced. Feeding hay also has the benefit of stimulating saliva production.

The role of saliva is not fully understood, but it appears to reduce the risk of bloat occurring.

This may be because of its dilution effect on rumen contents or its buffering capacity.

Strip grazing limits the amount of high-risk grazing and ensures that a greater proportion of the entire plant is consumed, “diluting” the intake of soluble proteins found in plant leaves.

Forages should still be offered before turn-out to reduce the likelihood of cattle breaking through the electric fence.

While individual drenching may be appropriate for cases of mild bloat, it is not a practical prophylactic strategy. If strip grazing is initiated the pasture may be sprayed with oil emulsified with water.

Adding oils to concentrates at a rate of 120g/day fed before turnout is a reliable method of administration.

Establishing productive pastures that have low bloat potential is a longer-term strategy. In practice, a maximum inclusion of 50% clover with grasses is a sensible compromise for grazing.

Also consider the addition of other legumes with low bloat potential (owing to their high tannin levels which bind soluble proteins) into the pasture seed mix, for example, 10% sainfoin or birdsfoot trefoil.

Acute bloat is a veterinary emergency – in serious cases, the vet may cut into the rumen to reduce ruminal pressure.

In less severe cases a stomach tube may be passed, attempting to find larger pockets of rumen gases which are then released. However, in the case of primary bloat this is often unrewarding.

Passing a stomach tube allows an antifoaming agent, such as vegetable oil, to be administered. Commercial anti-bloat remedies often include an additional surfactant (compounds to lower the surface tension).

More than one animal is likely to be affected and as such the herd should be removed from the offending pasture.

Each month, we’ll be bringing practical advice from an XLVets practice on a range of different subjects.