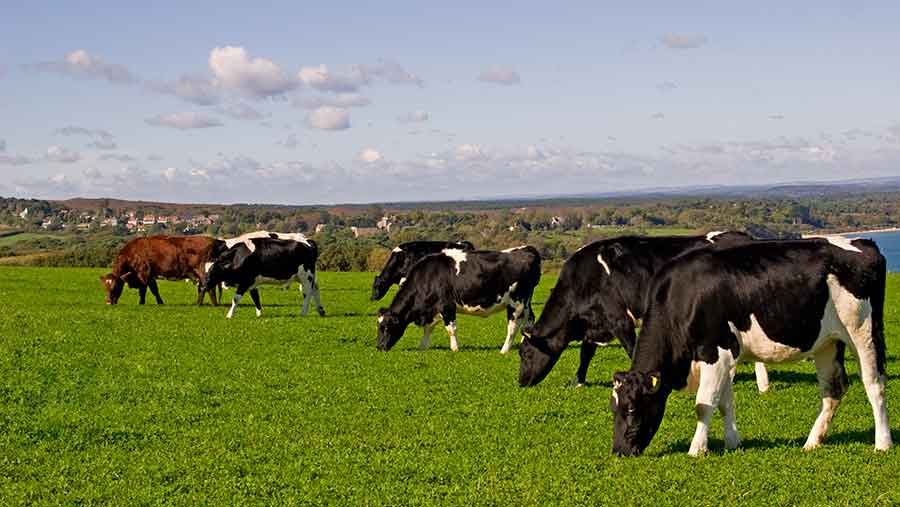 Feeding spring-calving cows grass clover can increase milk solids by 58kg a cow throughout the lactation, resulting in an additional €232 a cow (£200), a three-year Teasgasc study has found.

Researchers at Clonakilty Agricultural College, County Cork, say feeding a grass and white clover mix on the milking platform has resulted in an additional €720/ha (£630) because of the extra milk yielded when compared with feeding grass alone.

Lead researcher Brian McCarthy told delegates attending a tour to Clonakilty, one day ahead of the Positive Farmers conference on Tuesday, 10 January, that the difference in milk yield was driven by higher animal dry matter intakes, aided by higher-quality feed.

Positive Farmer’s conference co-founder Mike Murphy believes the research is “the most valuable experiment” he has seen in his lifetime.

Dr McCarthy says: “This means the fibre in the rumen doesn’t take as long to break down and passes through the rumen faster, driving intakes.”

As part of the experiment, 30 cows were rotated around four areas made up of 20 paddocks. The four areas were sown with one of the following:

Cows were stocked at 2.75/ha and nitrogen was applied at 250kg N/ha across all areas.

Animals entered paddocks at grazing covers of 1,300-1,500kg DM/ha and swards were grazed down to heights of 4cm, with a target of 300kg supplement fed a cow.

Bloat is a build-up of froth in the rumen that a cow can’t expel. The risk is typically higher on a clover diet because the rumen is working faster and gases are being produced quicker than the cow can expel them. Here are some steps to beat it:

One main disadvantage to the grass clover leys was grazing deficits in the spring caused by poor winter growth. This resulted in a difference in opening farm covers of 267kg DM/ha between grass-only and grass clover paddocks in 2015-16.

On average, grass clover leys grew at 2-2.5kg DM/ha over the winter, but grass almost doubled this at 5kg.

“Some of the clover paddocks lost cover over the winter if they had a high clover content,” explains Dr McCarthy.

This meant cattle on these paddocks had to be housed by night for four to six weeks at the beginning of the season in February and March.

Over these two consecutive seasons cows were fed 145kg DM extra silage an animal – roughly the equivalent of a bale, which costed an extra £30 a cow.

However, despite the extra costs in early spring, which amounted to €46 a cow (£40) for extra labour, seed, feed and bloat prevention oil, overall net costs benefits still amounted to €594/ha (£522), according to researchers.

“If anything is losing clover [<30%], try to close them first so they grow well over the winter. Try to graze high-clover fields [>30%] at the end of the last rotation so you use the material that is there and it doesn’t have the chance to decrease.”