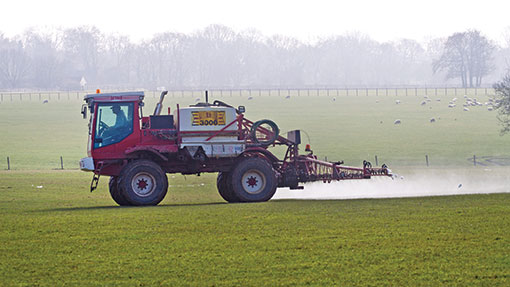 Late April is the key time to tackle docks to get the most from your grazed pasture and silage. Gemma Claxton takes a look how.

Dock infestations of 10% can reduce grass yields by the same amount and result in poorer silage quality. But achieving a successful kill with herbicides relies on applying them at the right time.

This means sheep and cattle farmers should be assessing dock growth regularly in the coming weeks.

Grassmaster Charlie Morgan says when looking to kill docks with herbicide, growth needs to be new this year and vigorous. The weed needs to be fleshy and the timing of application needs to be right.

He suggests the end of April on grazed pasture and three to four weeks before planned silage cutting on closed-up fields. But timing of treatment will vary depending on geographical location and stage of growth the product of choice targets. Farmers must read the product labels carefully, he adds.

“Farmers need to be assessing growth stages of the docks now. The temperatures have been right for growth since the second week in March. And as most farmers have been out with fertilisers, the weather and the added nutrients will boost dock growth.” says Mr Morgan.

According to IBERs research, dock infestation can cause significant losses in yield, says Mr Morgan.

“There can be a 10% loss from a 10% infestation and as farmers improve grassland management, total yield losses increase.”

“Many farmers have improved yields from 10t DM/ha yield to 14t DM/ha, which means potential losses will increase from 1t DM/ha to 1.4t DM/ha,” he explains.

Docks also have a 40% lower feed value than ryegrass, so farmers will make poorer silage and potentially have to supplement livestock with extra concentrates over the winter, significantly increasing feed costs, says Mr Morgan.

Deciding when and how to control docks can be a balancing act, especially if clover is present in the ley. The benefits of nitrogen-fixing clover will only outweigh the damaging effects of docks on yield and quality of pasture up to a point.

“It would be nice if we could leave the clover – but even with clover-safe products, the herbicide will still check its growth. I can live with 10-20% of docks, but as soon as a field reaches 20% coverage, this very quickly becomes 40% due to seeding,” says Mr Morgan.

He says it’s better to have all grass, rather than grass, 15% docks still present, with clover.

“When you hit that percentage, it just doesn’t stack up financially. Clover can always be reintroduced, but make sure you don’t go in too early or active residual herbicides may kill it off.”

Use of a break crop could also be useful to help eradicate docks. Short Italian ryegrass is a highly competitive species that is fast-growing and high-yielding and can be sprayed regularly, says Mr Morgan.

And while intensive grazing will keep docks at bay as they will be eaten, the only way of eradicating them is by spraying, says Mr Morgan.

Explaining how the past six months have affected dock growth, Mr Morgan says every year is different in terms of soil temperature.

“This year has been mild so docks have been growing most of the winter season and are at an advanced growth stage in comparison with last year.”

“The wet weather has led to more poaching and any patch of bare ground has the potential for a dock seed to germinate. And the compaction that’s been created means the dock’s strong tap root will outcompete against grassroots for nutrients, allowing it to dominate.

“Plus, soil nitrogen levels are lower because of the increased rainfall so grass will be weaker. Dock seeds can survive underwater for up to four years.

“All of this means docks are in a strong position to dominate this year. They are earlier and farmers need to hit them right.”

And with older docks being carried through the winter, plus new ones germinating this year, farmers might need to hit them twice (usually end April/May and again three to four weeks before second- or third-cut silage, when they begin leafing up again), he adds.

One of the biggest ways docks infest fields is in slurry and it’s not just because of the seeds that have gone through the animal, says Mr Morgan.

“Muck heaps also need to be turned and composted well to allow heat distribution throughout to eradicate seeds,” he adds.

This year’s Grassland & Muck event is focusing on managing grass to maximise energy output, including control of broad-leaved weeds – a theme that is central to Yara’s new GrassPrix competition.

Ten farmers are competing to produce the highest energy yield (ME/ha) from silage by focusing on varieties, nutrients and general management.

Visitors to the Grassland & Muck event can find out how to maximise yields and profits on their farm by attending the technical forums.