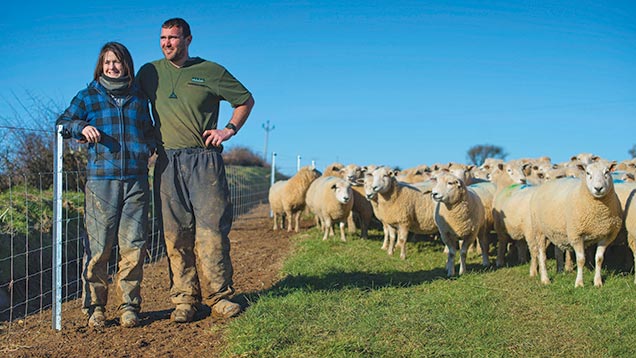 Trefranck Farm, which sits on the edge of Bodmin Moor, Cornwall, has been taken from one extreme to another since New Zealander Matt Smith and his Cornish wife Pippa took over the farm from her parents, Jimmy and Sheila Kempthorne, 18 months ago.

Mr Smith admits coming to the UK to farm certainly wasn’t his dream. But with the future of the 300-year-old family farm hanging in the balance – as Mr Kempthorne wanted to retire – the pair decided to give it a go.

The traditional Suffolk and Texel cross Mule flock and Hereford-cross suckler herd was a far cry from what Mr Smith was used to in Ruawai, where his family farm and where he worked as a shearer.

So as soon as the duo began the takeover of the farm in 2013-14, they wasted no time in converting it to a low-cost, New Zealand-style system.

First on their list of things to do was change the breed by buying in 122 Lleyn ewes and seven Lleyn rams from Derek and Cindy Steen, Lockerbie, and 270 Romney ewes, predominately full-to-broken mouthed.

Mr Smith explains. “The main thing I was interested in was the genetics. I wanted something that was going to produce a good carcass, have a good lambing percentage, but was not over the top prolific.

“I knew the Romney as a breed so I was starting in my comfort zone.”

Mr Smith says they decided to pick Romneys and Lleyns as their aim is to produce a solid half-bred animal.

“The Romney cross Lleyn is what I’m trying to breed, which will hopefully produce long-bodied lambs with good conformation and also get a good lambing percentage,” he says.

The Lleyn rams are put across both the Lleyns and the Romneys.

The aim is to run a low-cost system that enables the Smiths to have a good life and one that is profitable.

“We want to have a life, and while we want to be proud of our stock, we are not bothered about making the most in market.”

Last year, even though they were just at the start of their journey, the ability to “have a life” became no more apparent than at lambing time, as Mrs Smith explains.

“Last year my dad still had 220 ewes and we had our ewes, which made lambing interesting. Dad was lambing indoors and was in the lambing shed almost 24/7, whereas Matt was lambing outside, with a challenging spring, and only went out at daybreak and dark to check on stock.

“That meant he could get on with fencing during the middle of the day. Matt and dad are literally two opposites of farming,” she says.

Mr Kempthorne would also push lambs on with cereals when the price was right, but that was something Mr Smith was keen to stop, knowing he could get decent growth rates from grass alone.

Last year he finished all lambs off grass, with some lambs finishing at 12 weeks old weighing 16kg deadweight.

“We were making more with these 16kg lambs than we were taking them to 21kgs,” he says.

However, to finish lambs off grass a complete overhaul of grassland management is taking place.

The plan is to run a three-day shift rotation to encourage regrowth. Lambs will run in paddocks for the first two days followed by ewes, which will go in and “tidy up”.

To get a rotational grazing structure in place, the couple have so far spent £50,000 fencing the farm, and they are only halfway there. They are also making water available in every paddock.

Mr Smith says: “We have got to get great growth rate out of lambs so it’s worth the investment. We are currently getting all the boundaries tied up and are breaking fields into 1-2ha paddocks.

“We are starting at the back of the farm and working forward, that way it actually ensures we make it to the front of the farm.”

Mr Smith has also set about improving pasture quality. He is operating a minimum tillage system.

To prepare ground for reseeding, Mr Smith starts by spraying with glycophosphate and then goes in with a subsoiler. A power harrow is then used at a depth of 6in followed by an Einbok airseeder.

He is reseeding with a premium grazing ley as well as tonic plantain. “We are using plantain as it is high in tannins, which means it is self-drenching, has got a great ME value, grows at quite low temperatures and is really good for lamb growth rates.”

The plan is to reseed on a seven-year rotation. They also plan on growing fodder beet for strip grazing to keep costs down.

Lime will also be applied this year to improve pasture quality. “This year we are going to chuck 2t of lime on the ground as the pH is so low. We are also using a 20/10/10/10 fertiliser that contains sulphur, which we are low in. This will help kickstart growth,” he adds.

All lambs get shorn and weaned at the same time in mid-June. “We shear, vaccinate for clostridial infections and weigh lambs all at the point of weaning. This means we only have to handle them once.”

Ewes are also shorn twice a year in early May and September. “Romneys produce a lot of wool so we shear them twice using a winter comb, leaving about 2-4mm on them.

“Their wool is also worth £1.30/kg and shearing helps increase their metabolism. It also makes it easier to condition score ewes over the winter and means we don’t get ewes on their backs,” he says.

The Smiths’ grand plan is to build ewe numbers by retaining ewe lambs. The aim when all the paddocks are in place is to take the numbers up to 1,300-1,500 ewes across the 138ha farm.

All ewes are EID tagged, which will aid their decision when selecting ewe lambs for their breeding flock.

“After two to three years we aim to be very selective in the ewe lambs we hold back. We hope people will be sourcing the Lleyn cross Romney for their low-input commercial flock,” Mr Smith says.