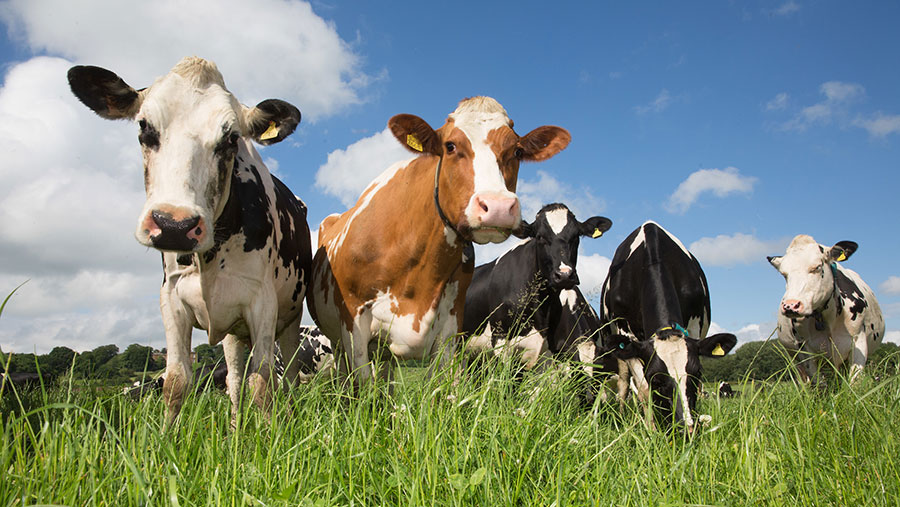 In the north of the country in Scotland and Cumbria, cold and drier conditions have meant grass growth has slowed, but on the whole, growth rates remain ahead of the curve after a fantastic start to the spring season.

As we come into the peak growing of May and June, farmers are already starting to look at how they can manage excess grass by closing up paddocks and taking cuts of silage.

And with the breeding season fast approaching, our dairy farmers look to cow condition and fertility.

As is normal for us in April, we seem to have hit balance day and become stuck – growing just about enough grass, but not much in the way of surplus.

Although ground conditions are good, a few late frosty mornings are managing to take the shine off spring growth.

On the positive side, the recent dry spell means grazing is clean and grass use is good, although with average covers static at about 2,000kg DM/ha, supplement feeding is still higher than ideal for mid-April  and will reduce as soon as we see growth comfortably exceeding demand.

Milk volume is as expected, although total milk solids seem to be just slightly stronger than last year. About two-thirds of this spring’s heifer calves are already outside learning to graze while also being fed milk once a day.

As we move towards mating, attention turns to cow condition and fertility as it all starts again.

What a difference a month can make. With only 3mm of rain and cold night temperatures, grass growth has started to slow and freshly drilled grass leys and swedes will soon need some rain to keep them going.

Nitrogen was applied at 50kg/ha across the farm as soon as ground conditions allowed, which has helped produce swards upwards of 2,500kg DM/ha for ewes with lambs in early lactation and fresh calvers.

Outdoor lambing with the dry conditions went very well. I was particularly impressed by the multiples lambing in the plantain/clover fields.

We found high survivability and ewes milking akin to the favourable trials in New Zealand, which is one of the reasons we have started growing it.

The herd were on/off grazed a lot during March as the ground was saturated. Some damage was caused, even with limited grazing time.

We have had a dry two weeks and have started to correct pasture damage. I have taken this opportunity to stitch some herbs into existing leys (sainfoin/chicory/plantain/yarrow/burnet/sheep parsley) with our scratch seeder.

The paddocks are then flat rolled and slit. I try to get all of this done by day three after grazing to limit the effect on regrowth.

The flat rolling alone takes four days’ growth out of my budget, hence the low growth on the last measure.

Average farm cover is about where I want it coming in to peak season. I am now entering paddocks at 2,600-2,850kg DM/ha and nailing them out to 1,500kg DA/ha in preparation for the breeding round.

It has been a fair spring with good growth and manageable weather conditions.

Excellent recent grazing conditions have allowed us to have cows out day and night and we finished feeding silage on 27 March.

This meant we finished our first grazing round on 7 April – slightly earlier than normal.

We are now allocating 16kg DM a cow a day of grass and have cut concentrates to 1kg a head, fed in the milking parlour.

This cake is high in magnesium and is upped to 2-3kg a cow a day in bad weather to reduce the risk of grass staggers, something we are very aware of in the second grazing round.

Grass growth is much higher than normal for this time of year than normal, meaning some paddocks will probably be taken as silage later this month.

Lambing has almost finished in just over two weeks, with only 40 ewes left to go now.

The weather was wet and warm to start with, which provided ideal grass-growing conditions. Grass quickly came away and some fields showed covers of 2,000kg DM/ha in late March.

Unfortunately it turned colder and drier in the last week and grass hasn’t grown nearly as well. We now have average cover of about a 1,700kg DM/ha (still much better than last year though).

We have not applied fertiliser yet, but it might be necessary to apply some to the fields that were grazed by hoggs over the winter to give us a bit more grass pre-rotation.

The ewes and lambs are all turned out at grass as soon as possible after lambing. They are stocked in small groups over the whole farm (mainly to prevent poaching, but it helps with mis-mothering too).

They will be mob-stocked after vaccination to allow rotational grazing to kick off when the lambs are all old enough.

The red clover has held up well and clover growth is starting to show through well now that the grass has been grazed down.

We are hoping to cut silage on here once the ewes are on rotation. Some of our fields are still very wet, but the grass mixes chosen last year designed for wet ground are proving their worth by remaining much less poached than some other, more open mixes.

It has been a lovely spring in Northern Ireland. We have an average cover of 2,242kg DM/ha – that’s 12.2 days ahead of normal and a growth of 26.9kg/ha/day. Although this figure is low, we are still dealing with some large covers of grass.

The new weather station has revealed that although we are believed to live in the warmest and driest part of NI, this is not the case, with other parts being drier, warmer and seeing more growth.

However, we are not the coldest or wettest either.

The stocking rate is increasing every day. An early cut of clover was taken last week at sevn bales/ha – a novel sight in early April.

Last spring’s reseed has fantastic potential. Unfortunately, there is a tremendous crop of thistles – too many to spot spray – so I may have to risk my clovers.

We are fast approaching the awkward time of year when grass growth goes berserk and it is difficult to get on top of.

What needs to be done is exactly what these Grass Watch farmers are doing – measuring and recording.

They know exactly when they can shut paddocks out for silage by using a computer programme to predict what their farm covers will look like at different growth rates in the coming weeks. And because they have measured for a number of years they will have a very good idea of what the average growth has been for that period over the past few years.

This historical data allows them to make decisions with confidence and a fair degree of accuracy. If shutting fields off for silage compromises the grazing, it doesn’t happen.

Also, shutting fields off in stages also makes it easier to recreate a wedge after silage, as the fields will be at different stages of regrowth.

If you do cut all your silage at once, you need to start grazing them when the covers in the first fields are suboptimal, otherwise the covers will be too strong on the last silage fields you graze.