Lambs are finishing earlier on a diet of grass and red clover since a Ceredigion sheep farm swapped set stocking and creep feeding for paddock grazing.

The Davies family sold 100 more lambs pre-weaning this year compared with 2019, and at heavier weights, too.

Bleddyn Davies, who farms with his parents, John and Audrey, attributes this directly to improvements in both grass utilisation and quality through grazing mobs in 2ha (5 acre) paddocks.

“The regrowth is excellent, it is more like silage aftermath,” says Mr Davies.

“Because the grass doesn’t get damaged or overgrazed as it does with set-stocking, it comes back stronger and the lambs finish well on it,” he adds.

The change of approach at Blaenglowon Fawr, near Llandysul, was prompted by concern about the impact of Brexit on the sheep sector.

Poor performers were removed, with numbers scaled back to 880 Welsh and Welsh cross Aberfield ewes and ewe lambs.

Changes were also made to the way the grass and flock were managed.

The fields at Blaenglowon Fawr are large – some are 9-12ha (22-30 acres) – and when sheep were set-stocked there was often a grass shortage prior to housing.

“The sheep had the run of the place and this meant grass growth was slow growing in the spring.”

Although this data is currently uploaded to Excel, the next step is to use Agrinet.

Each paddock is grazed by a mob of 230 ewes and their lambs three to four weeks after lambing. They are initially set-stocked at turnout, a system which is also used at tupping.

Paddocks are rested for 120 days over the winter, with sheep not entering the fields they graze pre-lambing until May.

Pregnant ewes stay at grass until 10 days before lambing – previously, it was three to four weeks.

Mr Davies has worked out that grazing each paddock for three to four days works best for his system, balancing production without the stress of moving sheep every day. 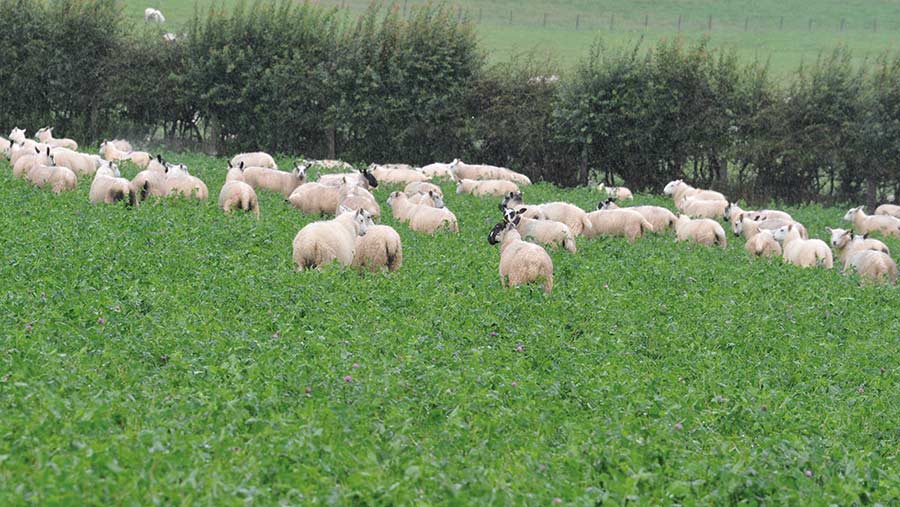 By mob grazing small areas, he is growing more and better-quality grass. It is even reducing worm burdens, with fewer treatments now needed.

“We have only wormed lambs twice so far, at six weeks old and prior to weaning, and we think this is because they graze the swards differently and are picking up fewer worm eggs,” says Mr Davies.

The changes made to grassland management have resulted in fertiliser use being cut by two-thirds.

An average of 15t had been applied across the 121ha (300 acre) holding during the growing season, but 5t is now used.

“This year has been a good one for growing grass, but even without the weather on our side, we would have needed much less fertiliser because we have seen a higher density of clover in the sward and the old leys have increased in productivity,” says Mr Davies.

Lambs would previously have been creep-fed in September, to push them for sale, but red clover now does that job.

By mid-August, 210 lambs from the Welsh and Welsh cross Aberfield flock had been sold to Dunbia on the Taste the Difference scheme at an average of 96 days to slaughter and an average weight of 18.3kg.

The performance of the farm this year has given Mr Davies confidence the system can work in multiple weather conditions – even during the dry spell in May, grass supply was sufficient.

Mr Davies has yet to calculate the financial value of the cost savings, but he says they will be very favourable, even when balanced against investment in grazing infrastructure.

“We feed no concentrates to the lambs, and the ewes get less because the housing period is shorter and they don’t need to be supplemented at grass because there is plenty of food in the fields for them.”

Increased grass production has prompted a rethink on stock numbers because the farm now has the capacity to carry more.

“We can push up numbers and this will increase our efficiency,” says Mr Davies.

He reckons some tough years lie ahead for the sheep sector if a Brexit trade deal is not struck.

“For us, it is all about the grass that we can grow to save on costs and our efficiency, to find the right balance between production and costs.

“Paddock grazing has made me realise that some of the costs we had before were not a necessity – it has shown me the true value of grass.”

A new application window for Prosper from Pasture runs from 26 October to 26 November 2020.

To be eligible to apply, applicants must have a recent Nutrient Management Plan, and if they need assistance with this, they are advised to contact their Farming Connect development officer.