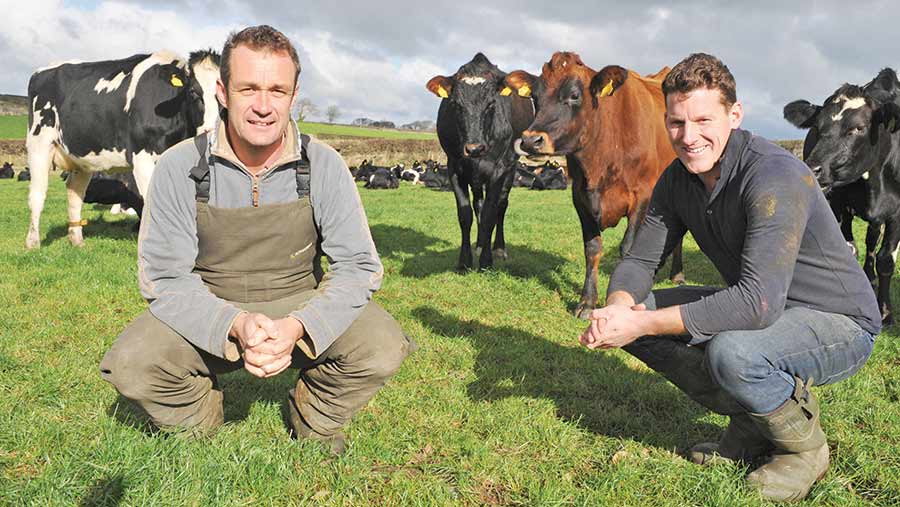 Reseeding up to 15% of paddocks annually has resulted in one dairy enterprise producing more than two-thirds of its milk from forage.

Richard Rogers and his former employee Gethin Roberts sought to unlock the full potential of grass production at Tre Ifan when they converted the 90ha Anglesey farm from beef and sheep to dairy.

In 2014, the decision was made to convert the farm to a grass-based spring block-calving unit, allowing Mr Roberts, who had worked for the Rogers family since leaving college in 2006, to become partner in the new enterprise.

Central to the conversion was an intensive programme of reseeding – 20% of the farm was ploughed in the first year and 10 to 15% has been reseeded every year since.

Although the poorest performing paddocks are taken out of the rotation, it was initially a challenge to sacrifice any grass due to its effect on grazing availability in the short term, but the drive to improve leys has paid dividends.

“You have to forego grass in the short term, but by taking a long-term view on grass quality the rewards are now there because grass performance has improved considerably in the reseeded paddocks,” explains Mr Rogers.

The best paddock is producing 17-18t/DM/ha and the farm average is 14.3t/DM/ha, achievements that resulted in the partners winning the British Grassland Society’s 2018 Grassland Farmer of the Year award.

But the partners are confident they are able to grow 16t/DM/ha on average.

Since 2014, 70% of the farm has been reseeded with high sugar Aber grass varieties that match the system and climate.

For ease of grass management, a tailor-made seed blend is mixed with varieties with a similar heading date.

Soils are tested every two years and, from the middle of March to the beginning of October, a blanket dressing of nitrogen is applied every three weeks totalling 250kg/ha a year. 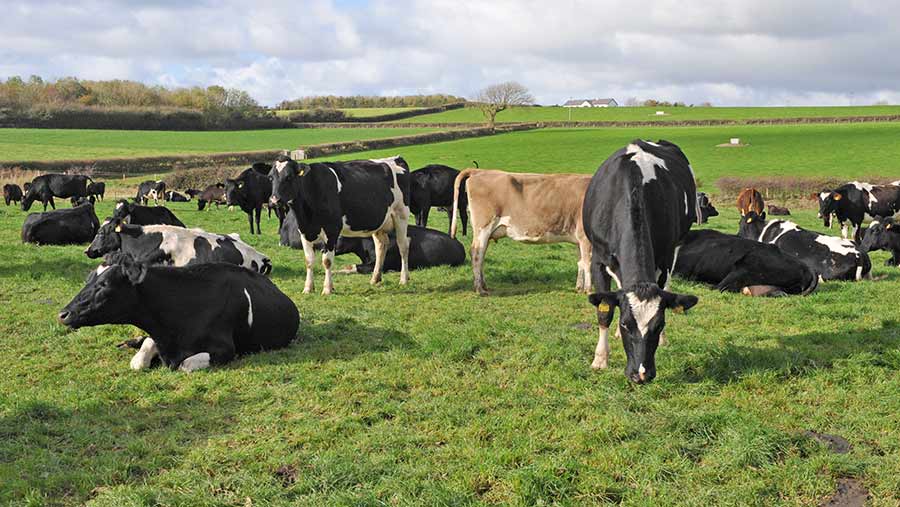 Emphasis is placed on prolonging the grazing season, reducing feed costs and increasing animal performance as a means of increasing output and profitability.

Good grazing infrastructure is key to this and results in a longer grazing season and more grass included in the cow diet.

A network of tracks has been laid, a new water system installed and a slurry lagoon constructed.

All 90ha of land is accessible to the 24/48 Waikato herringbone parlour therefore the total acreage represents the grazing platform.

The herd is made up of 360 New Zealand crossbreds, bought as heifers, with many sourced from Ireland and some from fellow spring calver Rhys Williams, who also provided his expertise and knowledge to guide the conversion.

Milk was first sold from Tre Ifan in February 2015 but less than a year later the enterprise came under pressure when milk prices tumbled.

It was a difficult year, not least because Mr Rogers had invested heavily in a new woodchip-fired CHP unit at another of his farms, Cefn Dderwen, to diversify income streams.

“It was a difficult year, we were lucky to still have the beef and sheep as a source of income, but coming through a year like 2016 gave us confidence in our ability to control costs,’’ he says.

Another challenge presented itself in 2018 with an exceptionally cold spring and very dry summer conditions, but cow condition and milk production were maintained, aided by supplementary feeding from mid-June.

Silage and blend were mixed in a feeder wagon that Mr Rogers had used in his beef enterprise, and fed in the fields.

He calculates the additional feed added around 1ppl to the cost of production but concedes it was a year to toss aside the rulebook and insists maintaining cow body condition and upholding milk production were priorities.

“We were not willing to sacrifice milk output or cow condition – in difficult years, you must be willing to spend.

“If we hadn’t we would have been dealing with problems two years down the line rather than taking a financial hit from putting in extra feed.”

Cows receive 1.6t/DM of silage and hay during the winter, inclusive of the shoulders of the season and the winter period, with 1t of high-quality silage fed in the autumn and spring shoulders and 600kg fed in the form of hay or roughage in winter dry period.

Silage is produced on contract by one of the Rogers’ family’s other businesses.

Hay, offered in bunkers with the silage, is added to the winter ration because it is very cost-effective, produces less slurry and is healthy for the rumen, says Mr Roberts.

To maximise milk production from the grazing platform, heifer calves are reared at Tre Ifan for four months.

Once they hit 100kg they are contract reared at Cefn Dderwen and then returned to the farm as in-calf heifers, three months before calving.

Mating starts on 1 May, with tail paints applied for the five weeks leading up to this. The herd is inseminated over a six-week period before bulls are introduced for four weeks.

The six week in-calf rate is 93%, with cows calving in a 10-week block from 7 February.

Fertility is underpinned by good body condition and cows are Metrichecked to identify any that have endometritis, twice or sometime three times before insemination, with the first check 28 days after calving.

Despite the challenges, the farm performed better than others in 2018, Mr Roberts believes, with overall grass production only decreasing by less than 1t/ha.

“We have been luckier than a lot of areas as we came out of the dry spell quicker than most.’’

The 2016 milk price crash could have dented his confidence, but Mr Rogers turned this negative into a positive by converting another farm to dairy.

Bodrida neighbours Tre Ifan and three generations of his family have farmed there.

The farm is stocked with 250 cows and milk was first produced there in February 2018, but cow numbers will increase to 280 this year taking the stocking rate from 4 cows/ha to 4.5 cows/ha on the 65ha grazing platform.

This has been made possible because three-quarters of the farm was reseeded after the sheep flock was sold in 2017.