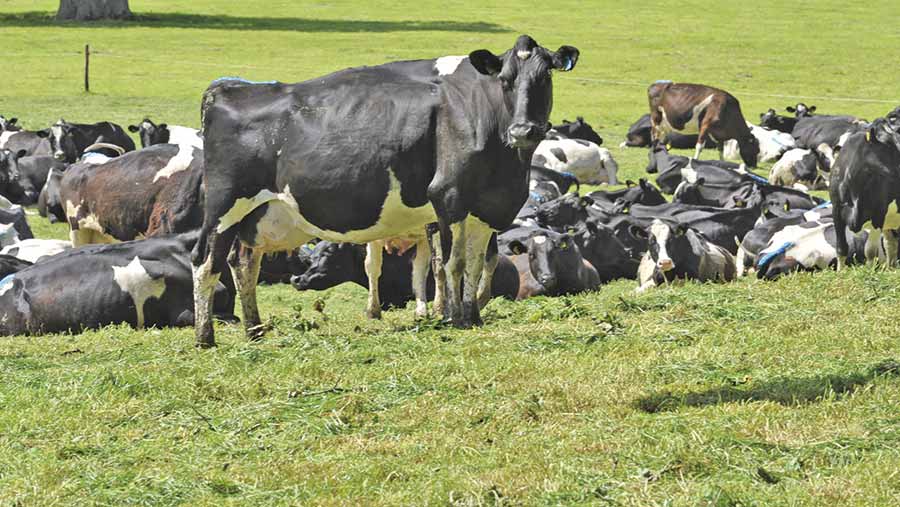 Stocking the milking platform at 4.71 cows a hectare is a risky approach on a low-cost grazing system but a Ceredigion dairy farm is proving it is achievable with excellent grassland management and strategic feeding of silage.

The Jenkins family – Aeron and Glenys and two of their sons, Eurig and Irfon – have grown their spring-calving herd from a 110-cow flying herd in 2003 to 420 New Zealand Friesians.

Key to this has been to grow as much grass as possible on the 90ha grazing platform at Pentrefelin Farm, near Talsarn. Last year’s average was 10.8t DM/ha.

See also: How grazing strategy can control parasites in cattle

With such a high stocking rate, growth rates must be on target almost every day of the rotation to ensure satisfactory pre-grazing covers.

To provide greater accuracy of grazing allocation, all fields have been mapped by Grasstech. This process threw up some interesting anomalies.

“We had been calculating allocation using IACs maps but these are not accurate, the actual field sizes are always much smaller,” says Eurig, British Grassland Society 2016 Grassland Farmer of the Year.

“One field which we had considered reseeding was actually two acres smaller. Now that we have this information and the cows are getting the correct allocation, it is clear that the field wasn’t underperforming.”

Because the grazing platform is heavily stocked, phosphorus (P) and potassium (K) levels are at indexes 2 and 3 so only nitrogen is applied, at 390kg/ha (312 units/acre), with sulphur added to the May and June applications.

“Last year, I fertilised the whole platform once a month but this year I am following the cows around the rotation,” Eurig explains.

The tractor GPS system is linked to the fertiliser spreader which also has weigh cells allowing precise application rates irrespective of forward speed.

“GPS is one of the plus points,” says Eurig. “There is no overspreading, we always come back with more in the hopper than we expect.”

Eurig measures all the paddocks weekly and processes this data using Agri-net to give an accurate picture of grass covers and growth.

The role of pre-mow grazing and reseeding

To maintain quality and growth, paddocks that are growing faster than demand are pre-mown for grazing or taken out of the rotation for big bale silage.

“We like to pre-mow or bale every field once. We took 60 bales off the grazing platform last year because of surplus and one field was taken out of the rotation for reseeding,” he says.

That field, one of the least productive, was reseeded with mixture of high sugar grasses and Timothy-grass.

Eurig says he included Timothy-grass because it grows in colder, wetter conditions – the annual average rainfall at Pentrefelin is 203cm.

“We need grass on the shoulders of the season, anyone can grow grass in the summer.”

He doesn’t favour direct drilling. “It is either good enough or needs ploughing.”

A harrow and aerator are used to keep swards productive and dirty water is spread on paddocks in the summer post grazing.

Some of the leys at Pentrefelin have been established for more than 30 years and cows will produce as much milk from these as from the reseeds.

All the fields are closely matched in terms of production. “We don’t have a high percentage of reseeds but if they are producing milk for the tank that is all that matters,” says Eurig.

This season, cows grazed from 20 February for three hours a day for two weeks after calving but, due to wet conditions and a high concentration of cows calving, half the milkers were then grazed at night and the other half during the day.

“We didn’t want to turn 340 cows out day and night and we were heavily stocked and a bit short of cubicle space so this system worked well,” says Eurig.

However, in a typical year cows get 12-hour allocations of fresh grass, with rotation length varying depending on grass supply and demand, with the herd running on 23-day rotations.

“The amount of concentrates fed varies from year to year, depending on the milk price and the cake price; no year is the same. We might feed 6kg a day in the spring but we are currently feeding 3kg,” explains Eurig.

“We are not afraid to put in silage in the summer if we are short of grass and we also feed silage from the beginning of September, between 2-3kg a day to extend the grazing round.”

Grass and silage is analysed and any mineral shortfalls added to concentrates at the feed mill. “They get 100g/day of whatever minerals they need at that point in time, if they are getting 2kg of concentrates or 6kg they will still get those 100g,” says Eurig.

Silage is produced from off-lying rented ground – last year 3,000 800kg bales were made.

The system relies on rented ground – the total area farmed is 290ha; some is subject to a farm business tenancy agreement and a proportion of grass is let annually.

“Security of tenure is an issue but I respect my landlords and they respect me, they understand what we are trying to achieve,” says Eurig. “We are not afraid to apply lime if we have got the land the following year.” 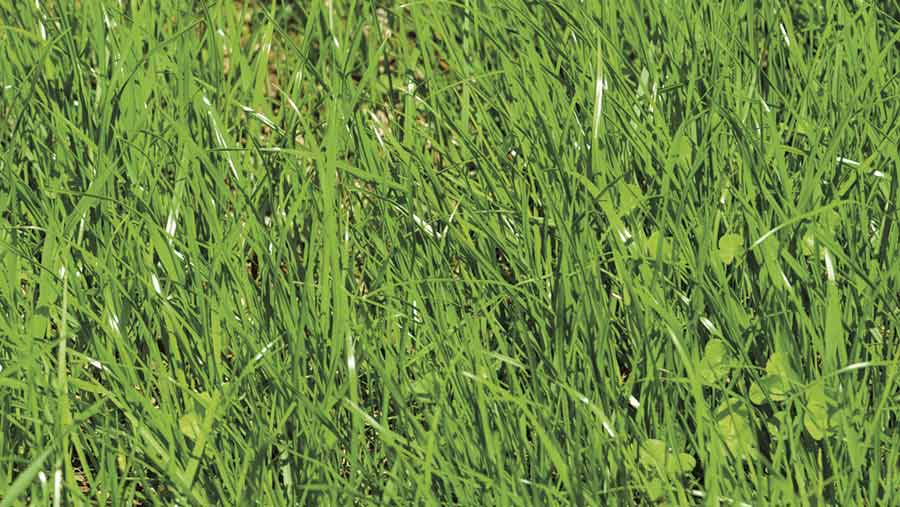 Some of the rented ground is used as deferred grazing for heifers, with grass conserved from mid-August to build covers.

Slurry is pumped to this land from a million gallon store which was installed in 2010.

The fields are divided into 0.3ha blocks with electric fencing. Heifers are given a fresh paddock every day, although this increases to twice a day – 7am and 5pm – when conditions are wet. As the season progresses and the heifers get heavier, the paddock size increases to 0.45ha.

“We had been running a group of 140 but this was too big because we weren’t getting the growth rates. We now have groups of 70-80,” says Eurig.

If conditions get too wet heifers are supplemented with concentrates.

During a wet period earlier this year growth rates dropped to 0.3kg/day so 3kg/head of concentrates was fed. As a result growth rates increased to 0.9kg/day.