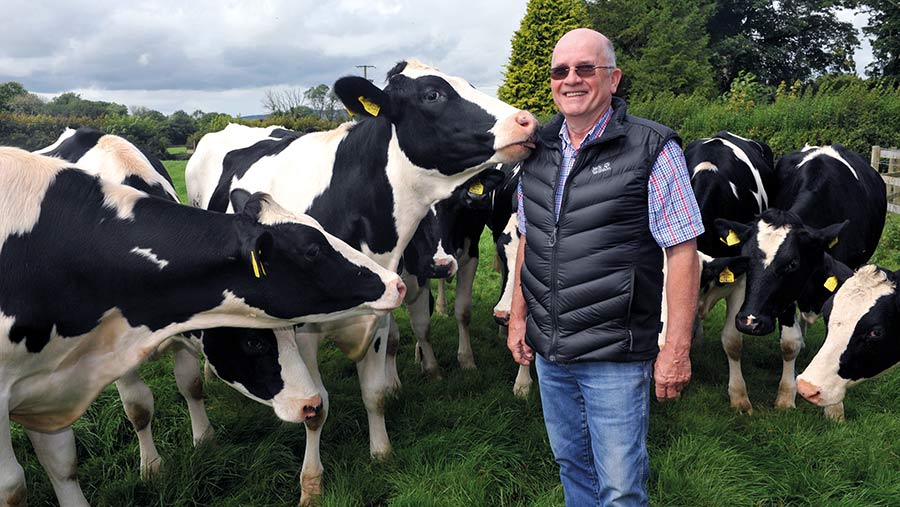 Keith Williams reseeds all fields about every eight years and that, together with cutting grass when it is young, are key to producing silage that can supply all the energy and protein requirements of growing animals.

Mr Williams’ approach to growing good-quality leys, coupled with attention to detail at harvesting, produced the winning entry in the 2020 All Wales Big Bale Silage competition – 30 years after he won the equivalent award for clamp silage.

See also: More on grassland management in our Know How Centre

“It is not rocket science. You have to plant good-quality seed, you must be prepared to cut grass young and it must have a high D [digestibility] value.

“I don’t want to cut old grass that has been there for donkeys’ years,’’ says Mr Williams, who farms 81ha (200 acres) at Haverhill Farm, Spittal, with his wife, Helen.

The Williams’ sell two crops of standing silage to a neighbour, totalling 97ha (240 acres), and make about 950 big bales of silage a year as winter fodder for the 160 heifers, which range in age from 12 to 23 months.

About 7ha (17 acres) of barley is grown on contract annually to provide an opportunity for reseeding with intermediate and late-heading ryegrasses with a high D value.

“These varieties will wait for you for a while, but if you have grasses that head too early, you are in trouble, especially when the weather is changeable,’’ says Mr Williams. 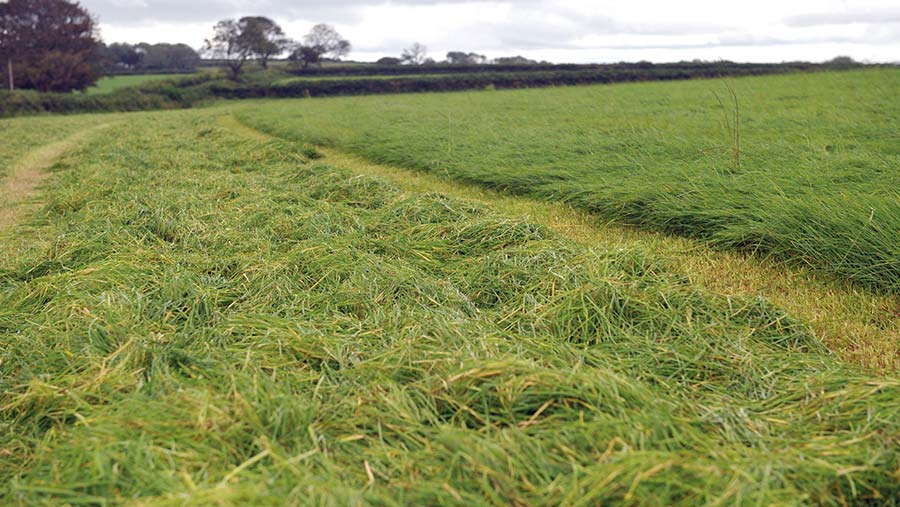 As an experiment, a short-term ley was planted in 2018.

“We decided late in the year to reseed, and I don’t like direct re-seeding so we used a short-term seed mix,’’ he explains.

That ley is performing well, but to capture the quality it must be cut every four to five weeks.

No clover is used in the seed mixes because sprays need to be used to control docks and these would kill clover.

Prior to first cut, 112kg/ha (45kg/acre) of nitrogen and slurry is applied.

This is followed immediately after harvesting with 90kg/ha (36kg/acre) of N via an after-cut fertiliser product.

The first cut of big bales in 2020 was taken on 20 April – cutting dates depend on the year, he doesn’t have a set date.

“I don’t look at the calendar, I look at the grass, the weather forecast and the rotation – do I need to take a field out to have it fit to graze by a certain date.’’

“I don’t mow until I know he can bale. The worst mistake you can make is to mow 30 acres and then find out the contractor can’t get to you for a few days,’’ he says.

Mowing is done at midday with a mower conditioner, when the grass sugars are at their highest, followed quickly by tedding.

“I don’t mind following the mower with the tedder, I like to spread the grass out as soon as possible,’’ says Mr Williams.

The grass isn’t chopped before it is baled because cutting it unchopped has never caused a problem with fermentation and conservation.

The crop is baled within 48 hours with a Fusion baler, with six layers of wrap. 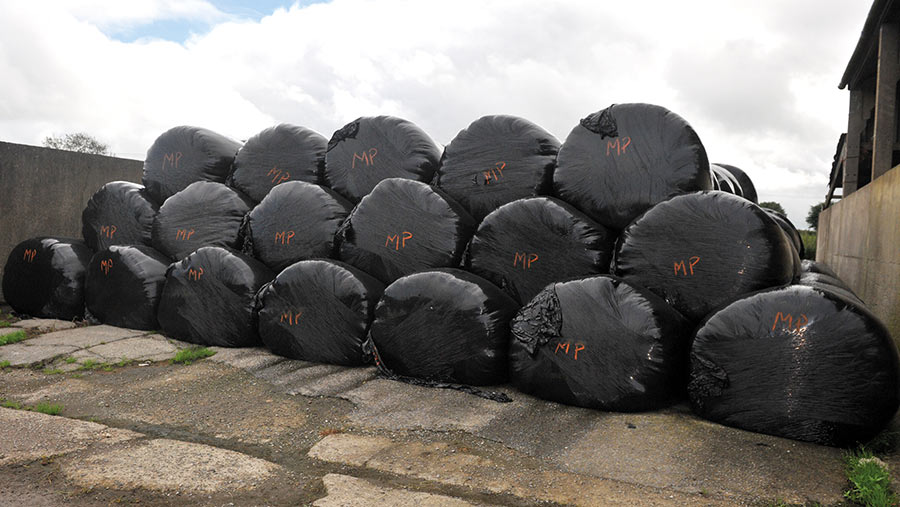 Although it costs more than wrapping with the standard four layers, Mr Williams says it results in less waste and he doesn’t use an additive, so this offsets the cost.

These are stacked on their side, because his bale handler is designed for that rather than a preference over upright stacking; the bales are stacked within hours of baling.

All bales are marked to identify which field they have been harvested from.

“It gives you some interest in the winter, to see how the silage feeds out according to the conditions it was harvested in and the ley it was grown from,’’ says Mr Williams.

“I like to see a bale looking as close to grass as possible.’’

For feeding out, Mr Williams uses a bale feeder that unrolls the bales after they have been unwrapped; he feeds five bales a day and says this system speeds up feeding compared to dropping them into ring feeders.

“It makes it easier for the cattle to eat the silage; we get less wastage.’’

He always has the bales analysed and the quality is so good that he has never had to use supplementary feed.

“If you have soil contamination from molehills, it is not only going to be dangerous to the animal at feeding out, it will spoil the silage,’’ says Mr Williams.

One hundred tonnes of lime is applied on 25% of the farm’s acreage every year, to maintain an average pH of 6-6.5.

To graze off surplus grass after the end of the cutting season, up to 600 tack sheep are introduced.

Mr Williams says he has learned a great deal through his membership of the Federation of Welsh Grassland Societies.

“I have always used the same principles for making good silage and have learned all of those things through being a member of the North Pembrokeshire Grassland Society.’’

There are many variables that must combine to produce good silage, but Mr Williams says there is one determining factor.

“Luck with the weather, that’s what you need.’’

Heifer growth comes from the quality of the grass grazed in the summer and the silage fed in the winter.

Heifers from the year-round calving herd he rears for arrive on farm at 12 months and leave at 23 months, on the point of calving.

They are housed on silage from mid-September; this allows them time to settle on silage three to four weeks before they are served with sexed semen.

“If they have time to settle down, you get much better conception rates,’’ says Mr Williams.

Mr Williams receives a daily fee per head; although the agreement is not based on growth rates, all heifers achieve the target weight of 350kg or higher for serving at 15 months.