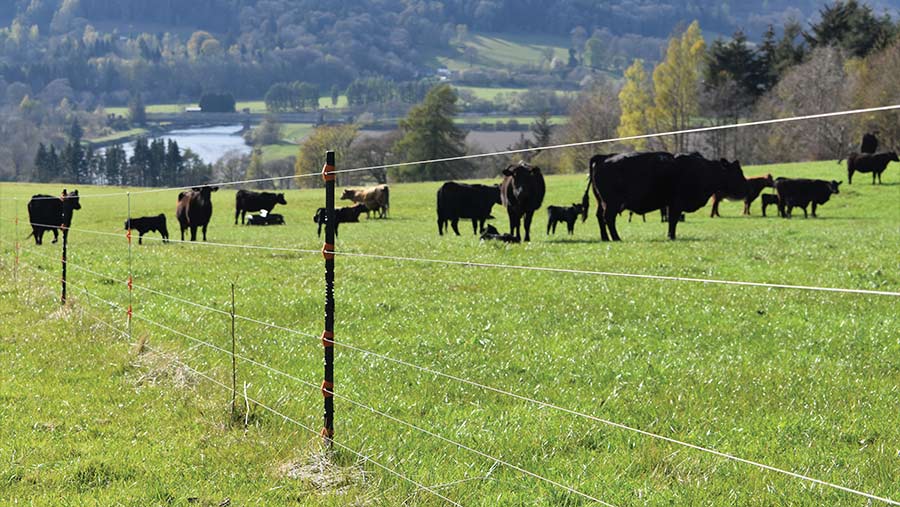 Fencing in-bye land and rougher hill ground has enabled Scottish beef and sheep producer Alex Brewster to lift stock units by 51.2 and give up 40ha of rented ground.

Since switching from set stocking to rotational grazing about seven years ago lamb weights have lifted by 3kg a head, but driven by his Nuffield Scholarship, recent improvements have focused on building soil organic matter and improving pH through holistic management.

This sees cattle at Rotmell Farm near Dunkeld, Perthshire, mob-grazed in groups of 150-180 ahead of sheep and fields rested for 30-90 days.

“We now know through modern science that pH is driven by the health of the soil microbes and your cowpats have a fairly high pH, so you can lift it using cows.

“I’m using the cow to feed the ewe. The cows break up the rougher pasture and, by opening up the sward and allowing time for regrowth, this produces better feed for the sheep.” 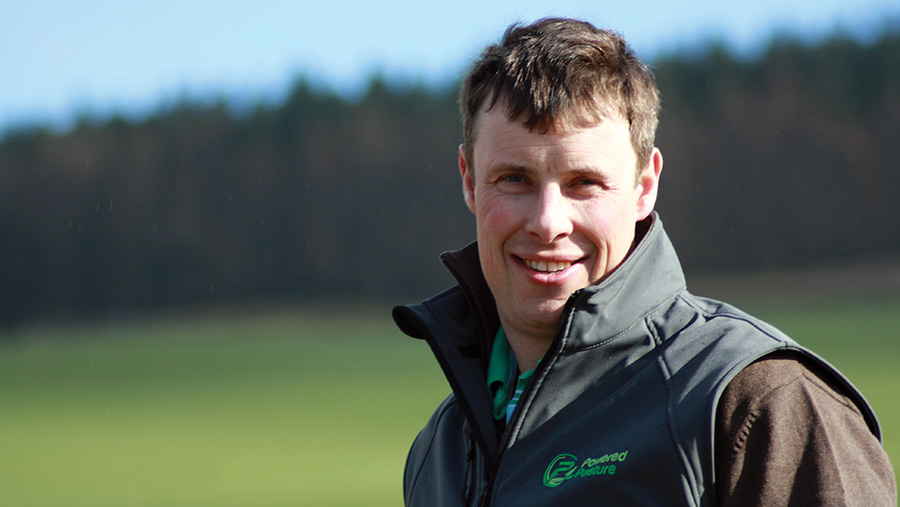 To facilitate this, in-bye pasture has been split into 10ha blocks and further sub-divided into 2.5ha paddocks using electric fencing.

When Mr Brewster began improving upland ground seven years ago he found it difficult to source equipment, and his company, Powered Pasture, was born out of a necessity to import higher quality electric fencing components, with Rotmell becoming a test bed for solutions.

Electric fencing has been connected to stone walls using insulated irons drilled into stone. Mains electricity is used to power the fences ,along with two 50 joule energisers, with a third being installed later this year.

A gravity-fed hill loch located at 1,300ft keeps header tanks replenished, and 4km of 50ml medium-density polythene pipes (MDPE), which have been dug into the ground to prevent freezing, supply mobile troughs.

Mr Brewster’s ethos is to “optimise the performance of the system” and build farm resilience.

“We can’t control the weather, but we can manage how resilient we make the farm. I’m trying to improve root depth to give me more access to soil moisture and build longer diverse covers to capture run-off,” he says

Root depth of in-bye pasture now extends to three-quarters of a meter below ground, which Mr Brewster says is a sign of improving humus.

“As we provide more rest, even in rougher country, the plants express themselves more.”

This is paying dividends in better animal performance. Growth rates of youngstock have lifted and, because stock classes are rotated to take account of parasite lifecycles, disease burdens have been reduced.

“We used to have a coccidiosis challenge annually in lambs, but we have not had that for three years now,” he says.

On average the farm receives 80cm of rainfall annually, but the biggest challenge at Rotmell is soil temperature, notes Mr Brewster.

He is trying to combat this, by going into the winter carrying higher grass covers to give the soil essential frost protection which accelerates spring regrowth.

The paddock layouts have evolved over time, as Mr Brewster admits he did not allow enough flexibility in the initial build back in 2014.

These were redesigned by year two. Initial pipes used for water were also too small to cope with increased stock demands.

“The lesson learned from that was huge. We didn’t anticipate the uplift in stocking numbers we were going to get. You have to be quite flexible,” he advises.

He is now beginning to improve a 500ha block of hill ground by splitting it into 12-16ha blocks. The aim is to temporarily subdivide these into 0.25ha paddocks potentially and move stock on eight-hour shifts.

This will allow better optimisation of grazing.

Farming new entrant Rhidian Glyn and his wife Elen took on Rhiwgriafol Farm, Machynlleth, in 2014 and aim to maximise grass utilisation and minimise sward damage through infrastructure and planning. 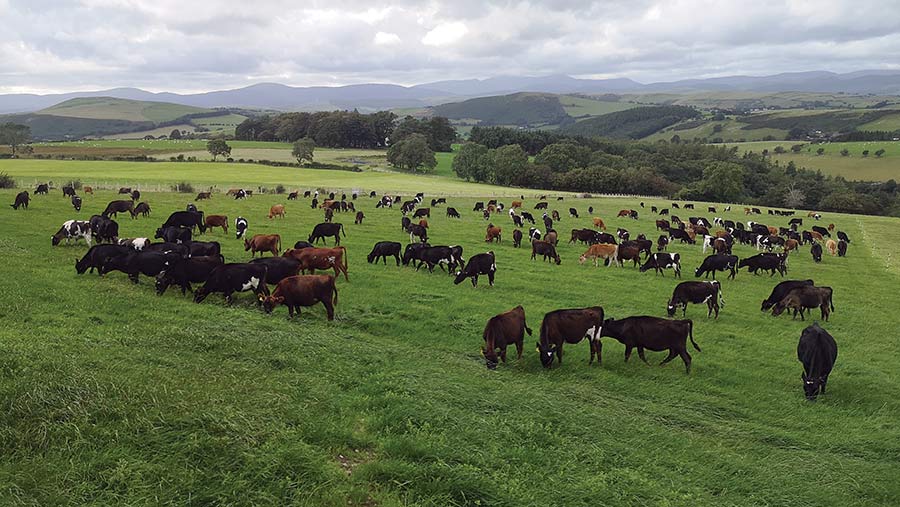 “It was quite well maintained previously, but set stocked. Just by subdividing some of the bigger parcels of land, we have improved productivity,” Mr Glyn explains.

Initially the farm was stocked with only sheep, but the increased grass growth has been key to enabling Mr Glyn to pursue a cattle-rearing enterprise.

He now takes batches of KiwiCross heifers and rears them to 20 months.

Division and infrastructure
“We rotationally graze the bulling heifers, and the sheep to a certain extent, but less religiously,” says Mr Glyn, who has worked with James Daniels of Precision Grazing to create paddock grazing systems.

Two 13ha blocks and one 11ha block have been split into 1ha paddocks. The aim is to put heifers into paddocks when grass measures 2800 kg dry matter (DM)/ha and get them to graze to a residual of 1500 kg DM/ha.

“We split the first 32 acre (13ha) block in a project with Farming Connect and the improvement and extra stock that ground could carry was unbelievable, so that’s I why I have continued,” Mr Glyn explains.

“It’s hard to quantify the benefits, but the first year we fed 40t of concentrate to the sheep and last year we fed nine tonnes.”

Mr Glyn has laid a network of alkothene pipe to ensure water availability for each paddock and uses:

Reseeding
Typically, 10% of the in-bye ground on the farm is reseeded each year, but there are some older swards that have been improved enough by grazing and, therefore, don’t require reseeding.

“We can’t touch the hill, but there are 220 acres (89ha) of lower ground and every year we put 10% of that to swedes before returning to grass,” Mr Glyn says. “But we’ve got leys that are 35 years old and still productive.”

The sward is sprayed off before being direct drilled with the swedes. The following year the ground will be rotavated to create a seedbed before a grass mix is broadcast.

Because only 10% of the farm is reseeded each year, Mr Glyn opts for a long-term mix, Preference, from Field Options.

“I’ve been playing about with herbal leys, adding chicory and plantain to the grass mix. Last year, we did four acres (1.6ha) and it worked well for finishing lambs, so this year I’ll be doing 20acres (8ha),” he says.

Grass is fertilised early with 40kg nitrogen/ha applied around the end of February into early March, which allows for a second application after the first round of grazing.

And every year, a third of the farm is soil sampled, so phosphate, potassium and lime can be applied accordingly.