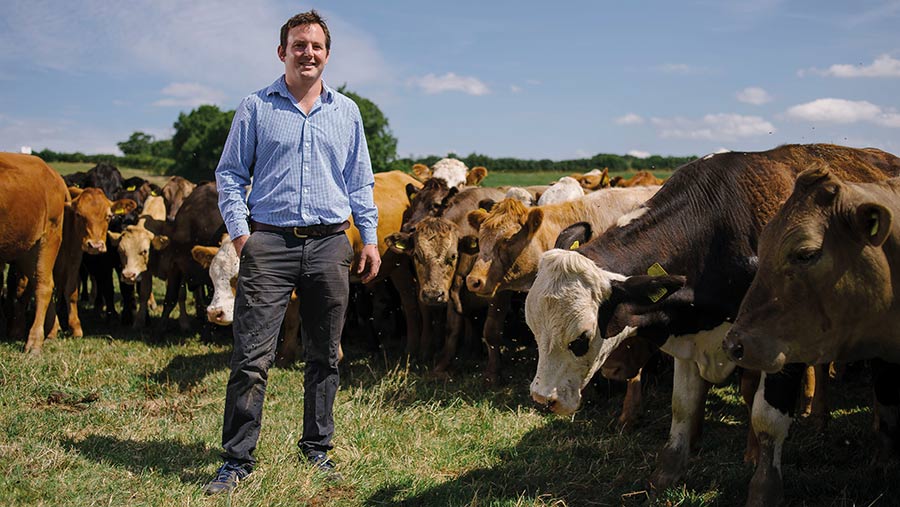 Devon farmer Johnny Haimes has cut costs and increased his net margin by 70% since switching from running a suckler herd enterprise to a native-cross-dairy finishing system.

However, in 2019, diminishing profitability became the main catalyst for change – leading Mr Haimes to make the switch.

“The idea to change what I was doing initially came about when I joined AHDB’s strategic farm network programme, with an eye on boosting profitability.

“I tried to make it work, but there was always something in the back of my mind that was telling me something had to change.

“Effectively, I didn’t love the suckler cows enough to keep them when they were not making any money.”

Mr Haimes made the decision to sell the entire herd – including cows, bulls, and calves – in one block in November 2019.

That first winter was spent rearing some Hereford- and Angus-cross calves, which Mr Haimes had been producing on the side, and he has been building stock numbers gradually since.

As the system is still in the early stages, Mr Haimes says he is buying stock from wherever he can, ranging in age from six to 12 months old, from private sales and market.

“Our most recent intake consisted of 100 six-month-old, weaned Hereford-cross calves, which came to the farm in March this year.”

The target for future purchases is to buy in 12-month-old stores, he adds.

One of the biggest cost savings of the system is that stock is raised and finished entirely on grass.

“When the weaned calves come onto farm, they are put straight out to grass and rotationally grazed – all as one block and moved every few days.”

Though he’s not certified as organic, Mr Haimes uses no sprays or chemical fertiliser on the grassland.

“This decision has been driven by costs, but it also made sense from a labour perspective, too, as it is just me full time on the farm. Running a minimum input system simplifies everything massively.”

Instead, Mr Haimes uses meticulous grassland management techniques to get the most from his pasture and maximise the amount of beef produced from each hectare.

Grass is plate-metered regularly, with the data inputted into AgriNet, so demand and supply can be configured.

“I measure the grass frequently and this allows me to plan ahead and ensure we are using our grass strategically.”

Cattle are outwintered and fed round-bale silage on a bale grazing system.

“We finish our last round of rotational grazing in August, then in the autumn I do a calculation that considers how much stock I have and what their feed requirements are, and then lay out the bales in the paddocks according to that calculation.

“As an average, cattle eat about 11 bales a day before moving to the next block. They are kept out over the entire winter, though I do move them on quicker if the weather turns bad.

“The cost savings here are huge. First, as we are [no longer] using straw in housing, and, second, because we are able to use any surplus grass, or grass that has got ahead of us after summer grazing, by making this into round bales for feeding over the winter.”

Mr Haimes has eliminated the cost of cereals by finishing stock entirely off grass.

He aims to finish heifers at 24 months and steers between 26-27 months.

So far, everything he has finished has graded O+, with the occasional R.

“My long-term plan is to build a supply chain system for sourcing cattle, whereby I can work with dairy producers to have a bit more of a say in the breeding.

“Going forward, calves with a high health status and good growth rates are going to be essential for me.

“I would really like to be involved with the genetic selection process as this would enable our system to benefit from traits that suit beef producers, too, rather than just dairy.”

Mr Haimes says his full economic net margin has increased by 70% since making the move (disregarding any Basic Payment Scheme or stewardship income).

What’s more, he says that despite slashing costs, he is now producing 30% more beef than he was in 2017-18 – further adding to a more profitable bottom line.

“AHDB’s Farmbench platform has been really useful for us. When you know your costs and output in detail then you can make better management decisions, and for me, that was the transition away from a suckler herd into a dairy-beef system.

“This goes hand-in-hand with regular weighing. The goal of any beef system is to ensure the productivity of your animals, and without weighing regularly, it is impossible to know if any of the changes you are making are having a positive or negative impact.”