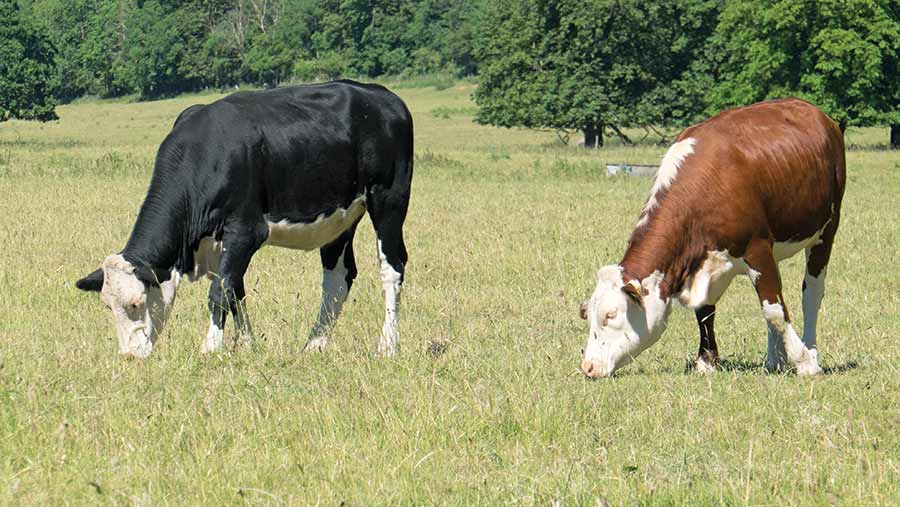 Prolonged hot and dry weather has put pressure on forage stocks, with grass growth plummeting in most areas of the country.

Figures from AgriNet up to 4 July show grass growth in Scotland, Wales and England has dropped to 27kg DM/ha/day on average.

Independent nutritionist Hefin Richards of Rumenation described the situation on farms as “challenging”, adding many of his clients in the Midlands and south-west Wales desperately needed rain.

He said the heatwave was a “double whammy” for most producers, who were only just recovering after the late spring, with freshly replenished forage stocks already being eaten into.

With first and second-cut yields for 2018 looking good quality, but low in yield, farmers are desperate to make bulk on the next few silage cuts.

But if rain doesn’t come, that won’t happen, warns Mr Richards. He said it may also affect maize and cereal crop yields, which will be a disaster going into winter, with feed prices already on the rise.

“It doesn’t look like we have any real amount of rain for the next couple of weeks. If it stays hot and dry through July maize crops will start to stress and wholecrop could be back 70-75% of target.”

They both advised producers to carry out forage budgeting as soon as possible to avoid a shortfall come winter.

Mr Richards said wholecrop was a good feed “insurance” but warned it was maturing very quickly.

“Decisions will have to be made very soon. If there’s anything resembling a third cut make it, because if it stays dry it’s going to regress.

“You can only feed it once so look at what you have got and use it to best effect.”

Cheshire-based independent grassland adviser George Fisher, of George Fisher Consulting said it will be too dry to apply fertiliser on many farms.

He advised to wait until rain is forecast within two or three days and apply at a rate of 2 units of nitrogen/acre/day (day between application and anticipated cutting date) or 2.5kg of nitrogen/ha/day.

“This sounds like a high application rate for this time of year but there will be good growth potential left in the grass,” he said. “We should plan for a good late summer and autumn to make the most of the season.”

“It’s a bit dry for slurry injection, but people shouldn’t be splash plating either, or they will just smother and kill the grass.”

Managing your dairy herd through the drought

“Our grass is looking terrible. I need 1,200 large square silage to get through the winter and I’ve got 650 bales, with second-cut looking non-existent.

“We will have to do something in case it does stay dry long term. I’m already asking around and getting advice.

“We might have to buy a feeder wagon to get more straw into the diet and possibly look at feeding something like pot ale syrup.”

“It’s not rained for two months. We are feeding second-cut round bale silage and 3kg of concentrate in the parlour to keep yields up whereas they would normally be on 1kg a cow/day and grass.

“It’s critical we keep the milk going, we don’t want the cows to dry themselves off in September-October time. Being organic, we don’t have access to byproduct feeds and could be having to bed on woodchip or miscanthus, depending on how expensive things are.

“Our reservoir is looking dry. Talking to fellow farmers, everyone is in the same boat.”

“Hot weather forced us to bring first-cut silage date forward a week or so. We’ve got 700 bales compared with 1,400 last year.

“Luckily, we have 250 left over from last winter. We might not have ground to flush ewes on in autumn because we may have to do a second cut.

“Rain, of course, will change everything and for the meanwhile the stock look well. Grass is very high in dry matter.”